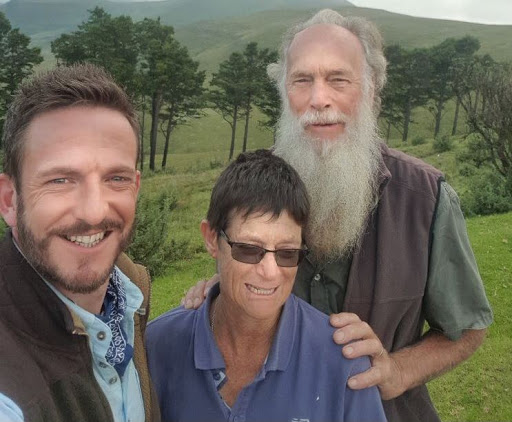 The victims British couple Rod and Rachel Saunders, pictured with horticulturalist and BBC presenter Nick Bailey, were kidnapped and murdered in 2018.
Image: Twitter

Three people accused of having strong links to the Islamic State group were involved in an international terror financing syndicate.

This was laid bare in the Verulam Family Court, north of Durban, where Sayfudeen Aslam Del Vecchio‚ his wife Fatima Patel and their Malawian boarder, Ahmad “Bazooka” Mussa, appeared on Wednesday.

The trio have been charged with the 2018 kidnapping and murder of British-born Cape Town botanists Rod and Rachel Saunders.

Dutch ‘jihadist’ linked to murder of botanists in SA

They also face further charges related to theft, robbery, contravening the Films and Publications Act, and four counts of contravening the Protection of Constitutional Democracy Against Terror and Related Activities Act. One of these relates to terror financing.

It was previously reported that the state had sought mutual legal assistance from the Netherlands and Somaliland, an autonomous state in Somalia.

Senior prosecutor Mahen Naidu informed the court that while the state had obtained financial records and documents from the Netherlands, which were in the process of being translated, Somaliland had not yet delivered.

Naidu revealed that in both instances the records were financial and banking documents and were the only evidence outstanding in the state’s case against the trio.

On Wednesday, the state walked into proceedings with a plan for a lengthy postponement to February 2020 to obtain the outstanding documentation. However, the trio’s legal bigwig, advocate Jimmy Howse, was not having any of it.

Howse placed himself on record as the legal representative of the accused, who had previously accepted legal aid representation only to later opt out.

He told magistrate Irfaan Khalil he would oppose the state’s application for a February 2020 postponement, given the fact that the accused would then have been detained for close to two years.

He said he would not accept any date later than December, and questioned the state’s lackadaisical pursuit of the records from Somaliland.

With the state and defence at loggerheads, Khalil had no choice but to request a date on which the state could hand in its application for a 2020 postponement, as well as an opposing application from the defence.

The matter will proceed on November 14.

At last! Mom to reunite with 3 kids after dad takes them abroad

Major drive as SA women say ‘no’ to violence in taxis, trains and buses