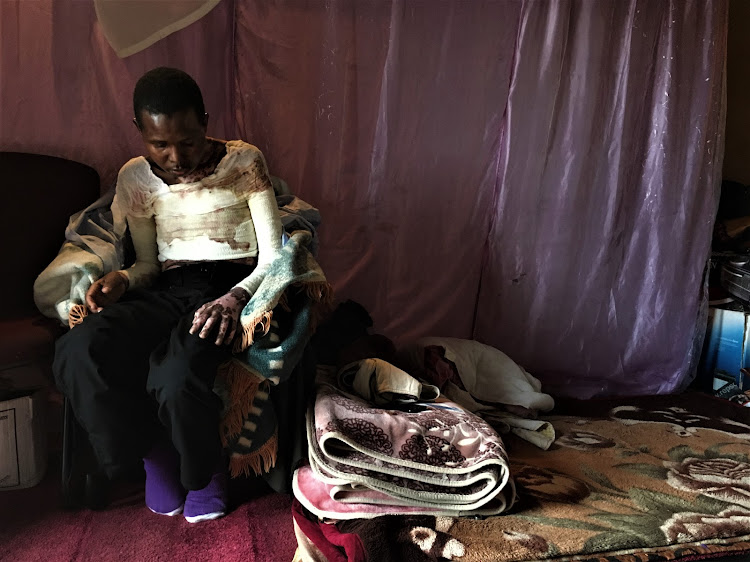 BACK TO THE FIRE Truck driver Ronias Tavengwa, 37, sustained third-degree burns to the upper half of his body when he was set alight and his truck torched in April 2019.
Image: Orrin Singh

Ronias Tavengwa, 37, sits covered in bandages in his tiny two-room home in Chatsworth, south of Durban.

For 24 hours the Zimbabwean national is coiled in a blanket on a chair, relying solely on his wife Thavisile to help him eat, drink and go to the bathroom.

It’s been just more than four months since the Zimbabwean truck driver was set alight and his truck burnt to ashes.

Almost half of Tavengwa’s body is covered in third-degree burns, a reminder, he says, of what it means to be a  “kwerekwere” living in SA.

Gasping for air with every sentence, Tavengwa recalled the fateful events of April 27 when he was pulled over by two men and called out for being a foreigner.

You cannot understand that pain - nothing I say can describe what it feels like to have your flesh burning.

“I was on my way to load at the Southway depot in Isipingo. Just as I turned off the R102 there was a vehicle parked in the road, blocking my path. Two men got out of the vehicle and approached my truck. One of the men jumped in the passengers side and said: ‘My brother, we know this company – do you know where you are? This is SA.’ He said I am a makwerekwere who is surviving while they are suffering.”

Tavengwa said before the men could finish talking to him, another vehicle pulled up behind his truck and startled the men, who got back into their vehicle and drove off.

“I proceeded to the depot, where it took me no longer than 30 minutes to load. After loading I went to an area where truck drivers pull over to sleep, not far from the depot itself.”

The men he had encountered earlier suddenly appeared.

“One of the guys was very aggressive, and the other was laughing a lot. I knew something bad was about to happen.”

Understanding the seriousness of the situation, Tavengwa hatched a plan to grab his bag from inside the truck and make a run for it.

“I was just about to reach for my bag when one of the men started approaching me, he was about 4m away, and he threw something straight at my chest.” 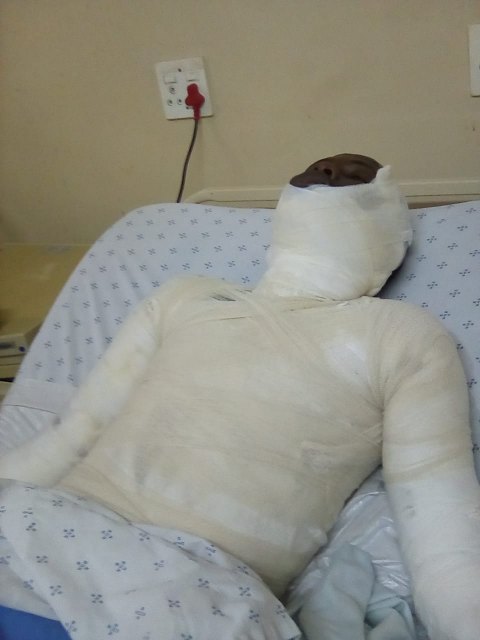 Agonising Ronias Tavengwa was admitted to hospital with third-degree burns to the upper half of his body.
Image: Thavisile Pilime

He was able to run to a nearby tap and douse himself as his truck burnt to the ground.

Paramedics soon arrived and treated him on the scene before taking him to hospital in a critical condition.

His ordeal highlights incidents of attempted murder and assault with intent to do grievous bodily harm – contact crimes that, according to police statistics released on Thursday, have surged in the past year.

Last week was especially hard for Tavengwa as he relived his nightmarish ordeal when he heard of trucks that were set alight in KwaZulu-Natal and saw footage of foreigners being attacked in other parts of the country.

On Monday, two trucks were set alight in Montclair, south of Durban, after a resurgence of violent attacks on trucks driven by foreigners in the province last Sunday.

That evening two more trucks were set alight on the N3 northbound in the Mooi River area.

ANALYSIS: It’s foreign to us, but we need grown-up conversations about SA

We’re terrified of the highway to hell, say truckers

Truck attacks have taken a toll on SA’s economy, roads and most importantly the drivers
News
3 years ago

The torchings came as 20 arrests were made in the province in connection with violent incidents related to protests in the trucking industry.

The first arrest came after a road to the Richards Bay harbour was blocked by 11 trucks on Sunday.

“Police responded instantly and managed to locate the drivers of the vehicles. Eleven suspects were arrested and detained at the Richards Bay SAPS for public violence and obstruction of traffic,” the police said.

Four other suspects were arrested for possession of an unlicensed firearm with 15 rounds of ammunition. They were also found in possession of three bottles containing petrol, seven cellphones and a pair of gloves.

Chairperson of the Foreign Truck Drivers’ Association (FTDA) in Durban Noel Chiyamuro said that while he understood the plight of South Africans who claimed foreigners were taking their jobs, he was saddened by what was happening in the country.

“Our families are surviving because of SA, we are managing to put food on the table because of this country. With the situation in Zimbabwe right now, we’d rather be here than there.”

Chiyamuro said the truck owners were the ones to blame, alleging that nine out of 10 foreign drivers hired were exploited for cheap labour.

“A foreigner earns between R200 and R300 for 12 hours of driving. According to the bargaining council, the going rate is R57 per hour.”

He said trucking companies were only interested in profits and were trying to dodge taxes.

ANALYSIS: Is failure to fight xenophobia ...

ANALYSIS: The people may be dead when ANC gets ...

#CrimeStats | ‘My car was stolen from a police station’