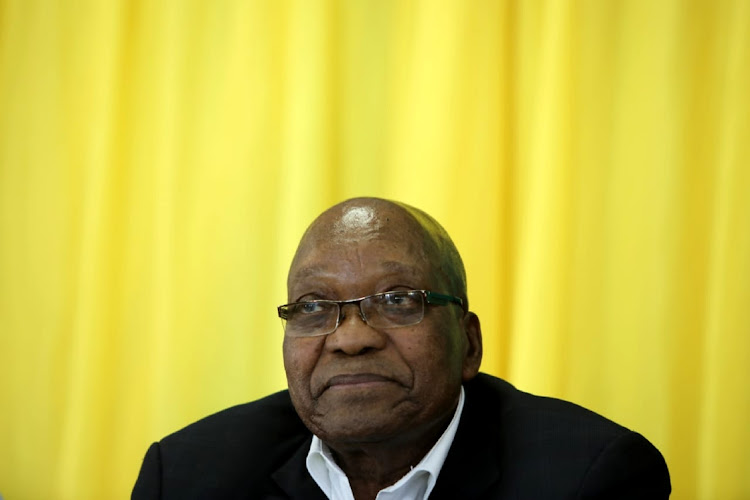 DEBT'S THE WAY I LIKE IT The curators of the broke VBS bank want to attach former president Jacob Zuma's Nkandla homestead.
Image: Sandile Ndlovu/Sunday Times

In September 2016, former president Jacob Zuma signed a multimillion-rand loan agreement with VBS Mutual Bank to cover the court-enforced repayments for upgrades to his Nkandla homestead.

But less than two years later, Zuma had already defaulted – and three years later, almost to the day, the troubled bank’s liquidators filed court papers to get the former president to pay up on an outstanding R500,000 in arrears. In total, he owes more than R7.3m.

If Zuma does not pay, the liquidators want the option to “execute” on the rural homestead in lieu of the outstanding cash.

In court papers filed in the High Court in Pietermaritzburg last week and seen by Times Select on Tuesday, VBS Mutual Bank’s liquidators write that Zuma took out a loan of just over R7m on September 8 2016. In total, the papers show, he would have to repay R16.6m, including interest and service fees. This would be done in 240 monthly payments of R69,623.91.

The controversial Nkandla homestead was listed as security on the loan and listed as the address on the mortgage – and “in the event of a default or breach by [Zuma] ... the plaintiff [VBS Mutual Bank] may initiate debt enforcement procedures ... [and/or] foreclose on the immovable property bonded”.

“Subsequent to the delivery of the demand letter [Zuma] effected sporadic payments, all of which were less than the agreed monthly installments,” the papers read.

The documents also detail how VBS tried to get Zuma to make further payments in 2019:

This non-payment led to the court papers being filed.

The papers give Zuma 10 days to state whether he will defend the legal action, and then an additional 20 days to file that motion.

Zuma’s spokesperson, Vukile Mathabela, said on Tuesday night he was waiting for information from the former president’s legal team before he could comment.

In April, the liquidators from accounting firm SizweNtsalubaGobodo (SNG) Grant Thornton warned that anyone who had borrowed money from the bank and had not begun paying it back, or defaulted on payments, would be in their firing line.

But at the time, SNG Grant Thornton executive Anoosh Rooplal told the Sunday Times the liquidators were not pursuing Zuma as “he is servicing his housing loan”.

Last year the Sunday Times reported that Zuma started repaying the VBS loan only 18 months after he took out the loan to pay for his Nkandla homestead. VBS was put under curatorship in March 2018.

Around the same time that Zuma was given the loan, he elevated Toni Ramabulana, who owned a 20% stake in VBS, to the Venda throne.

Rooplal said in April: “Where clients are in default on their loan repayments and loan obligations, we are following due process to collect all nonperforming loans.”

At least part of VBS’s largesse was made possible by illegal deposits made by municipalities to the tune of R1.5bn.

A 148-page forensic report released last year by advocate Terry Motau, who was mandated to investigate by the Reserve Bank, found that 53 people and companies had over about three years received a total of R1.9bn from VBS.

KPMG: More than a wise man needed to restore ...

VBS Bank rot grew out of a culture of impunity at ...

How a R350m PIC credit facility to VBS was looted

We can laugh at Hlaudi, but maybe he’s a loon who needs help