For 13 years they yearned for a baby. Then came the medical ...

For 13 years they yearned for a baby. Then came the medical miracle 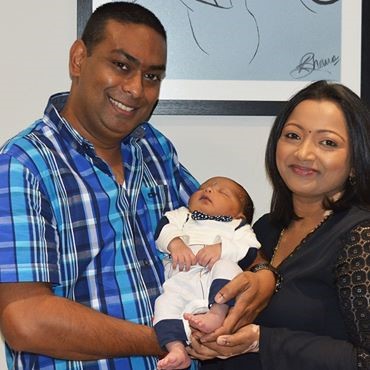 The Raghubirs Arun with his wife Ashlesha Raghubir, who recently gave birth to their 'miracle' baby boy, Ayush.
Image: Facebook- used with permission

For 13 years Ashlesha Raghubir, from Phoenix in Durban, tried to fall pregnant.

She is now the first woman in SA to give birth to a child after using a new technique using platelet-rich plasma (derived from blood) to stimulate the stem cells inside her ovaries into growing into eggs.

Doctors told her she had no hope of giving birth to her own child, as she had a condition called “primary ovarian insufficiency”.

This is when a woman runs out of eggs early, previously referred to as premature menopause.

The condition is very rare and affects less than 1% of all women. In most cases the cause is unknown.

“My husband, Arun, and I have been trying to have a child for so many years that we had almost completely given up hope and were close to despair,” she said.

“We had been told by many doctors over the years that I wouldn’t be able to fall pregnant and that we should rather adopt a child or consider falling pregnant by egg donation, as I was not ovulating at all. We were determined to have our own baby, however.”

She visited Dr Sagie Naidu at the Durban Fertility Clinic March 2018, and the procedure was done at the end of June that year.

Naidu learned of the experimental procedure when it was first spoken of at the European Society of Human Reproduction and Embryology conference in 2017.

“I was very intrigued by this. I looked at the protocol.”

He learned it was a low-risk quick procedure using the person’s own blood.

Naidu said the research into using platelet-rich plasma in women who didn’t produce eggs was “in its infancy” and a randomised controlled trial was just beginning in the UK.

He does not know if it has ever been tried in SA, but it has been used successfully abroad in a few women with Raghubir’s condition.

He explained to Raghubir it was an experimental but low-risk procedure.

Naidu explained how it was believed to work: a stem cell is a primitive cell that can develop into different cell lines. It is believed the platelet-rich plasma (PRP) – extracted from blood – contains growth factors that stimulate the growth of stem cells. In ovaries, the PRP infusion stimulates the stem cells into developing new eggs.

Naidu inserted the  PRP into Raghubir’s ovaries at the end of June last year using keyhole surgery in hospital.

It worked. When Raghubir fell pregnant, Naidu could barely contain his excitement. Neither could she.

Given just how difficult it has been for me to conceive, we consider Ayush to be our little miracle child.

“I could scarcely believe that I was finally pregnant; that must count as one of the happiest days of my life,” she said.

“Given just how difficult it has been for me to conceive, we consider Ayush to be our little miracle child.”

The procedure goes beyond helping with infertility.

When Graeme Smith broke his hand playing against cricket in Australia during a Test match in 2009, platelet-rich plasma was injected into his hand to “facilitate healing”, said Naidu. He could start playing again soon after.

The use of PRP is also used to rejuvenate tissue in cases of burn wounds, bone injuries and hair loss, said Naidu.

Naidu said from discussions with colleagues who specialise in fertility medicine, it had emerged the procedure had not resulted in a successful pregnancy in SA before.

“I am unaware of any other centres in the country using PRPs in reproductive medicine. We have had many colleagues around the country congratulating Durban Fertility Clinic on this milestone and expressed an interest in the procedure.

“This may be an important breakthrough and has brought renewed hope for women with ovarian insufficiency,” said Naidu.

“It is such a great feeling. We created an innocent soul,” he said.

“It is such a responsibility. It just changes your whole life. We have got a sense of purpose. Something we waited for so long is here.”

Mothers of innovation: the miracle of midwives ...

'I want a divorce - and I'm taking the eggs'

Want to have a baby? You'll have to wait your turn

Ova to you: Human eggs made from scratch