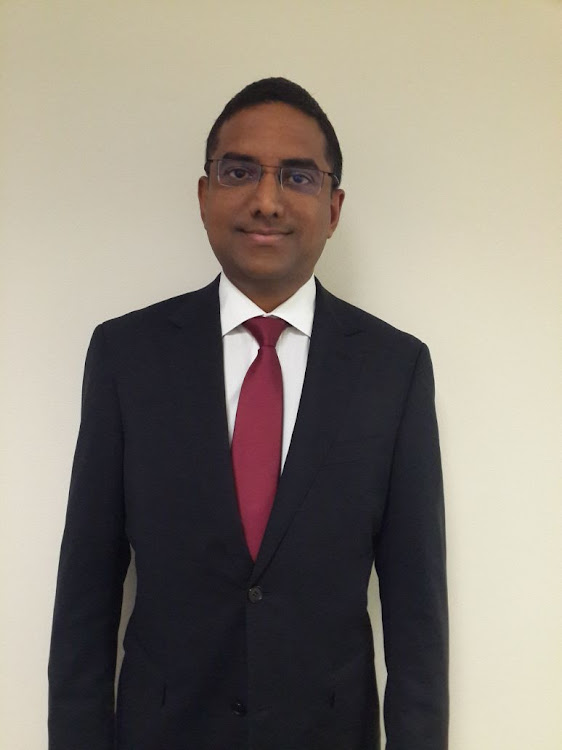 A senior manager at financial services giant Santam has been placed on suspension after he allegedly made after-hours calls soliciting “adult entertainment” from a recruiter who was head-hunting him.

Soomeshan Pather, head of finance of Claims & Salvage in the Commercial and Personal Insurance division*,  was outed on social media last weekend – by Yoni Titi, a recruitment specialist and director of Yoni Titi Human Capital – unearthed similar allegations as well as disciplinary action against Pather.

On Friday, Pather denied all allegations, saying an internal disciplinary hearing last November had found him not guilty on all charges except for a one of conduct unbecoming of a manager “where I had nudged (a former personal assistant)  aside with a ruler”.

“I deny that people are saying these things about me and it is clear that she [the former PA] had an ill motive in making these accusations which were fully ventilated at the hearing, the result of which thwarted her malicious conduct,” he said through his attorney, Kirshen Naidoo of Kirshen Naidoo and Company.

In July 2020, Pather informed Times Select that the allegations against him by Thato Xaba were rejected following a disciplinary hearing in May and June 2018.

“The investigation into our client’s conduct found that there was no substance to the allegations and our client was found not guilty of sexual harassment,” Pather’s attorney wrote.

Extracts from a document presented to TimesLive show that Pather “freely and voluntarily” resigned from Santam in August 2018. He also received a severance package.

Times Select spoke to three other women, including the former PA who laid the formal complaint with Santam, who have since left Santam as a result of Pather’s behaviour.

The women had contacted Titi after seeing her post, in which she mentioned Pather by name, and shared their stories.

In her post Titi said she became saddened after a complaint from Xaba, one of her recruitment consultants, that Pather, who she had tried to recruit for a number of positions in 2017, had called her at about 2am on December 24 and two weeks ago, requesting “adult entertainment” and “fun”.

“Am deeply saddened by tearful call from one of my female recruiters who worked on and advertised a head finance role in November last year,” Titi began her post last Saturday.

“Santam takes this matter very seriously and is committed to following a transparent process, within the ambit of the law. We hope to conclude the investigation as soon as possible,” he said.

Mabaso could not confirm whether Pather had faced similar charges, due to confidentiality. “Some of the information sought from us may compromise the principle of privacy and confidentiality.

He would walk past the printer and smack me on my bum. Everyone knew about my case but he walked around telling people I am
an attention seeker.

“Critically, Santam has a strict code of ethics and we expect all employees to adhere to its core values of treating everyone with dignity, respect and courtesy,” he said.

The former PA claimed Pather regularly “smacked” her on her bum, and would laugh when she said she did not like it.

“He would walk past the printer and smack me on my bum. Everyone knew about my case but he walked around telling people I am an attention seeker,” she said.

'Made me feel dirty'

She added that she was triggered when someone drew her attention to the post last Saturday. “I cried every single day because of what he put me through. I never wore skirts (at work) anymore, only pants. I was so uncomfortable.”

Another woman, who asked not to be named so as not to attract attention at her new job, said conversations from her manager went from him telling her to wear tighter skirts to advising her to have more sex with her husband because she has “issues”.

“His comments made me feel dirty and I would always try to avoid going into his office on my own because of what he would say.”

Pather said: “I have never spoken to any other female colleague about the tightness of their skirts. I place on record that (the former PA) had made mention of this at my disciplinary hearing and her allegations was not substantiated and I strongly caution you to be aware of the fact that (the former PA) was being malicious towards me and saying many things to discredit me without proof.”

I strongly caution you to be aware of the fact that (the former PA) was being malicious towards me and saying many things to discredit me without
proof.

Xaba, 31, said she had no idea that when she contacted the chartered accountant last November, she would be violated.

“I was asleep when the first call came, so my initial thought was this is a wrong number. I told him that and immediately hung up, but he called again and I asked him what he wanted and he said he's looking for fun.

“I dropped the phone again and ignored about two more calls. Everything went quiet until last week Thursday when he called again after 2am,” she recalled.

“This time I traced his number on Truecaller and saw the name and it immediately looked familiar to me and I checked my file at work and realised who it was.”

In a legal letter directing Titi to take down the post this week, Pather said the March call happened as a result of a pocket dial while he was fixing his TV at 2am.

Naidoo said his client had never had any discussions with Xaba except for phone conversations after she contacted him regarding employment prospects.

Titi’s allegations, he added, are unfounded and seem to have an ulterior motive and malicious intent. “I have never heard from Ms Thato Xaba with regard to the allegations against me concerning her which I also find very suspicious.”

*This article has been updated to reflect that Pather informed Times Select in July 2020 that he was subsequently found not guilty of sexual harassment.

#MeToo, says Lewinsky. My fling with Clinton was ...

Caregiver who 'assaulted' autistic boy was on final written warning