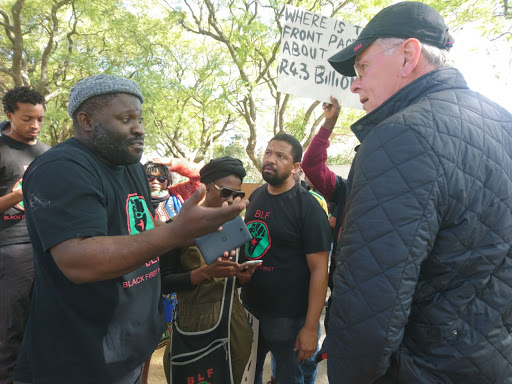 Tiso Blackstar editor Peter Bruce confronts Black First Land First protesters outside his home in 2017 as he increasingly became the focus of allies of the Gupta family
Image: Abigail Javier

A former Hawks member‚ now employed at a leading private investigations firm‚ has withdrawn his objection to two protection orders that prohibit him from conducting any further surveillance on two respected  Tiso Blackstar Group journalists.

The Randburg Magistrate’s Court made final the orders against Nico Smith‚ the head of investigations and intelligence at Midrand-based Combined Private Investigations (CPI)‚ and issued warrants of arrest valid until 2023 in Smith’s name.

CPI’s biggest clients are Eskom and Transnet‚ for which the company conducts copper theft investigations.

In November TimesLIVE reported that Smith bragged on his CV‚ uploaded to his LinkedIn page‚ that he “brings to the table” specialised skills and a “cellphone informant working with me for the past 14 years (employed at the leading cellphone network in SA)” (sic).

Parts of the telephone records were published on Gupta-linked news site wmcleaks.com on August 13...

The CV has since been taken down.

Smith also lists two cellphone numbers on his CV‚ but only declared one to the court. Sources close to the investigation have told TimesLIVE that Smith used the second‚ undeclared number to contact his cellphone informant.

He will immediately be arrested if he contravenes the order‚ which prohibits him from contacting or conducting unlawful physical or electronic surveillance on Tiso Blackstar editor-at-large Peter Bruce and Financial Mail editor Rob Rose.

On Tuesday counsel for Bruce and Rose‚ Laurence Hodes SC‚ was meant to call witnesses, including a senior investigator at MTN and a SAPS investigating officer‚ but Smith’s consenting to the orders made this unnecessary.

Their testimony is now expected to be heard in the criminal matter pending against a senior MTN employee‚ Primrose Nhlapo‚ who admitted to her employer that she had assisted Smith in gaining access to both journalist’s telephone records in return for payment of R3‚750.

Nhlapo worked as a senior fraud analyst at MTN‚ but resigned last year shortly before a disciplinary hearing was to be held.

Parts of the telephone records were published on Gupta-linked news site wmcleaks.com on August 13‚ including records of Bank of Baroda CEO Manoj Kumar Jha‚ in an article that sought to link former finance minister Trevor Manuel‚ Bruce and Rose to the influencing of Kumar to close the Gupta family bank accounts with Baroda.

The order also asks that WMCLeaks be prohibited from publishing any further defamatory content relating to Bruce.

In July‚ the website made public a “leaked report” ostensibly compiled by a private investigator‚ showing photographs of Bruce with a woman he said in a subsequent opinion piece was making custom dog collars for his pets.

The report also published ID numbers‚ addresses and cellphone numbers of Bruce and others and‚ while seemingly inaccurate‚ did reveal that Bruce had been followed for at least a week in September 2016 — the same period during which his cellphone records were accessed.

Smith and CPI have denied ever having conducted surveillance on Bruce or accessing the phone records of any journalist or politician and he plans to oppose the orders being made permanent in court on November 8.

Smith maintained his innocence in court on Tuesday‚ saying that the decision to not oppose the finalisation of the orders stemmed from the possible financial burden the legal costs pose.

According to court papers attached to the application‚ citing an affidavit by MTN chief forensic investigatort Petrus Steyn‚ the cellphone records eventually published on WMCLeaks were given to Smith by Nhlapho‚ who, when confronted, admitted verbally and in writing to Steyn that she was paid R3‚750 by CPI in return for the records.

Smith and CPI denied this in November. Smith claimed the funds were approved and paid by CPI to Nhlapho for her son who‚ he said‚ assists him with information.

'I have been caught in the crossfire'