In a galaxy far, far away, there’s a spider with stars in its ...

In a galaxy far, far away, there’s a spider with stars in its eyes

In the Tarantula Nebula, new stars are being born in defiance of what scientists previously thought possible 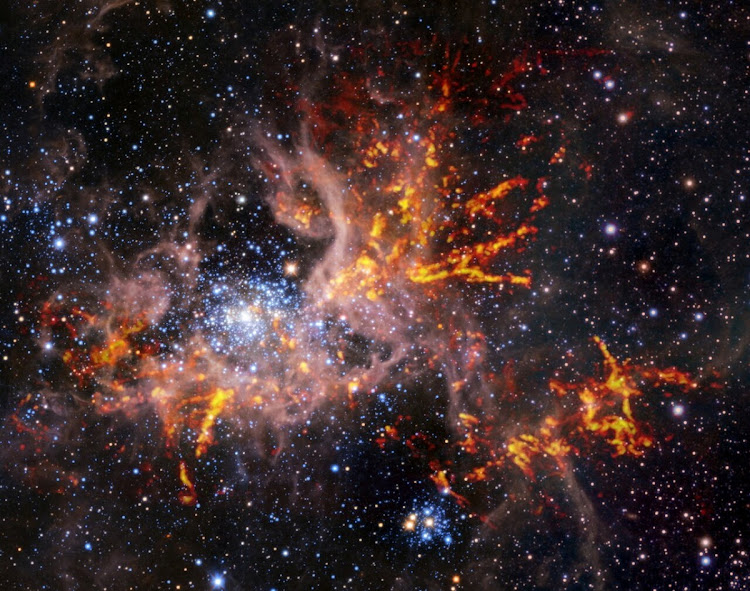 HOT TOPIC This image shows the star-forming region 30 Doradus, also known as the Tarantula Nebula. The background image was captured by the HAWK-I instrument on ESO's Very Large Telescope (VLT) and the Visible and Infrared Survey Telescope for Astronomy (VISTA), and shows bright stars and light, pinkish clouds of hot gas. The bright red-yellow streaks superimposed on the image come from radio observations taken by the Atacama Large Millimeter/submillimeter Array (ALMA), revealing regions of cold, dense gas that have the potential to collapse and form stars.
Image: Handout via Reuters

Astronomers have peered into a teeming stellar nursery in the Tarantula Nebula, a colossal cloud of gas and dust next door to our galaxy, gaining new understanding of the dynamics of star formation, while obtaining a dazzling image of the cosmos.

Researchers said their observations offered insight into the interplay between the irresistible force of gravity that drives star formation and the huge amounts of energy massive young stars inject into their nearby environments that could inhibit stellar birth.

The Tarantula Nebula, residing in a satellite galaxy of the Milky Way called the Large Magellanic Cloud, is a web of stars, gas and dust with a diameter of about 600 light years. A light year is the distance light travels in a year (9.5-trillion kilometres).

Located about 170,000 light years from Earth, the Tarantula Nebula is formally named 30 Doradus, referring to a catalogue number for objects in the direction of the constellation Dorado.

It is called the Tarantula Nebula because some of its architecture appears as glowing filaments of gas, dust and stars reminiscent of spider legs. The nebula’s gas composition is similar to the universe’s earlier in its history, mostly just hydrogen and helium.

The European Southern Observatory released a Tarantula Nebula image showing wispy gas clouds that may be remnants of larger ones ripped apart by energy unleashed by massive young stars.

“We see stars forming where there is a lot of gas and dust available, and there is definitely a lot of it in the Tarantula Nebula,” said astrophysicist Guido De Marchi, of the European Space Agency’s European Space Research and Technology Centre in the Netherlands and co-author of the research published in the Astrophysical Journal and presented at a recent American Astronomical Society meeting.

The findings were aided by observations using the Chile-based ALMA telescope.

“Stars form when gas clouds collapse under their own gravity and the gas gets denser and denser. These clouds contract and warm up until the core is hot enough to start the stellar engine, an immense nuclear reactor,” De Marchi said.

“But we always thought that when massive stars — over 100 times more massive than the sun — begin to form they release so much energy that it prevents the infall of more gas, shutting off the fuel for more stars to form. The beautiful observations of the Tarantula Nebula obtained with ALMA now show that where the gas is dense enough it continues to fall unabated and new stars can keep forming. This is interesting and new,” he said.

De Marchi was referring to a phenomenon called feedback, with massive young stars emitting large amounts of energy into their local environments in the form of photons and high-speed particles. The nebula’s primordial composition has fostered the formation of particularly large stars, some 200 times as massive as our sun.

“The Tarantula Nebula is the most extreme feedback environment that we can observe in detail because it hosts the nearest example of a massive young star cluster,” University of Illinois astrophysicist and study lead author Tony Wong said.

“One of the big mysteries in astronomy is why we are still able to witness stars forming today. Why didn’t all of the available gas collapse in a huge burst of star formation that came and went long ago? Observations with ALMA can shine a light on what is happening deep within clouds and help us understand how gravity and feedback compete for influence to keep the rate of star formation under control,” Wong added.

The nebula’s sheer beauty was not lost on the researchers.

“I personally love the Tarantula Nebula, scientifically and aesthetically,” De Marchi said. “It is just an iconic scene in the sky. I have often wondered what the night would look like if we were on a planet around one of its stars, with colourful bright clouds and strings of gas criss-crossing the sky.”

Great depression for Revlon as it files for bankruptcy

Blue light: what we do and don’t know about the damage it causes our skin