Hear this, VW: we love the mutant, now how about an all-electric ...

Hear this, VW: we love the mutant, now how about an all-electric T1?

Volkswagen’s Half-track Fox, which was engineered for Alpine terrain, has been restored to its former glory ORANGE YOU A BEAUTY The Half-track Fox is one of the rarest Volkswagen T1 specimens in existence.
Image: Supplied

Everyone loves the Volkswagen T-series, in all its guises. Whether we’re talking about the original, air-cooled model or the current T6.1 in full-cream Caravelle guise, the appeal of the German multipurpose vehicle has endured through the decades. A functional interior with space for outdoorsy paraphernalia.
Image: Supplied

Aside from usual passenger applications, the model has served as a platform for specialised requirements. The mutant eight-wheeler T1 you see here, for example, was engineered to tackle punishing Alpine terrain.

It began life as a regular T1, coming off the Hannover production line in 1962 for an Austrian buyer. A bit later in its life, it was converted into a four-axle, mountain-conquering machine, earning the name Half-track Fox. Bashing through the snow in a Volkswagen Half-track Fox.
Image: Supplied

The Fox was a product of independent engineering rather than an in-house project by the manufacturer. According to Volkswagen, Viennese mechanic Kurt Kretzner, an avid skier, was responsible for the conversion. The sales literature he came up with at the time envisaged “an ideal helper for everyone: mountain hut keepers, hunters, foresters, doctors, maintenance engineers for ski-lifts, TV and radio masts, pipelines and the like”.

He spent more than four years developing the concept. Just two were made in the period up to 1968 and the vehicle seen here is the sole survivor. Volkswagen’s classic department came into possession of the rare Bulli at the end of 2018, with the intention of a ground-up restoration, which was recently completed. The off-road bus lived a reclusive life, rarely seen until the 1990s, when it was taken in the by Porsche museum. It then went into the hands of enthusiast group Bullikartei, whose plans for restoration in 2005 never materialised. A chain-drive setup at the rear mirrored the front axle's configuration.
Image: Supplied

While the Half-track Fox wasn’t going to win sprint contests, it seems to have been quite a capable thing. The 1,192cc motor (25kW), encumbered by the additional axles, meant top speed was claimed at just 35km/h. Of course, its forte was an ability to trek steadily over slush, snow, rock and the occasional stream.

The wheels of the front and rear double-axle were shod with rough-tread rubber. A chain drive connected the two axles, each wheel had its own brake and a limited-slip differential was added for enhanced traction. Part of its name is owed to the set-up of its underpinnings: “the mechanic opted not for steering via chains on every axle as is found on a bulldozer, but instead for a half-track solution (with chains only on the drive axles) and an almost standard, albeit doubled-up front-wheel steering mechanism”. 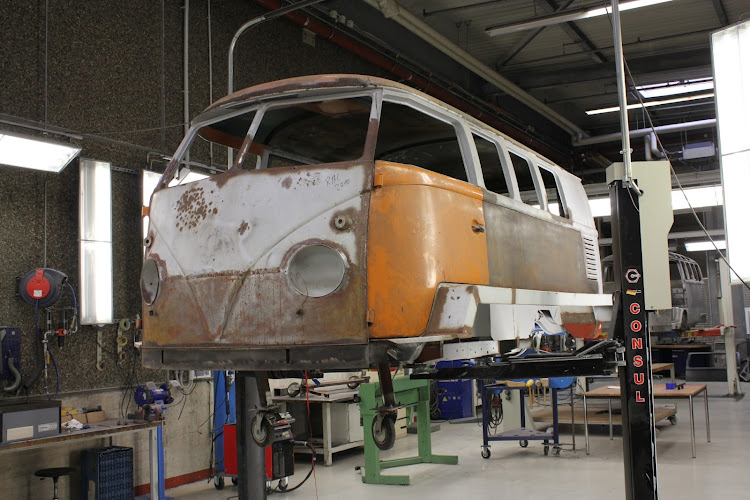 No corners cut in the ground-up restoration by Volkswagen's classic team.
Image: Supplied

Volkswagen’s classic division says it spared little in returning the Half-track Fox to a better-than-original state. The 60-year-old paint was stripped, its body was repaired, given a cathodic dip coating and repainted. A mechanical overhaul sees the eight-wheeler chassis in operational shape. For the interior, Volkswagen allowed its team to exercise more creativity, with beech and pine trim, as well as fitting additional storage compartments. Earlier this year the Half-track Fox made its first voyage through the snow in decades.

Wouldn’t it be nice to see a modern, all-electric recreation of the concept using the forthcoming ID Buzz as a starting point? If you’re reading this, Volkswagen boffins, consider it a hint.

Coldplay turns heat up on climate change with emissions app