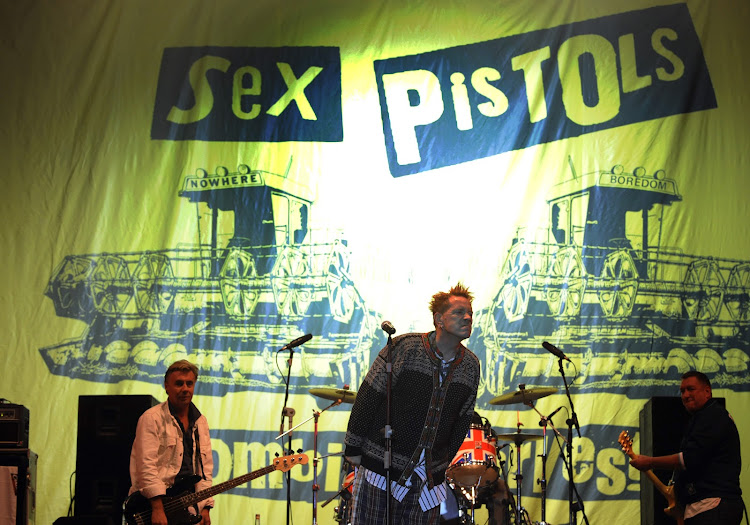 The Sex Pistols grabbed the limelight in London 45 years after they first convulsed Britain, as members Steve Jones and Paul Cook joined director Danny Boyle on the red carpet for the premiere of a drama tracking the punk band’s rise and fall.

The cast of young up-and-coming actors who play the band in the miniseries Pistol also posed for pictures at the ritzy event in the capital’s Leicester Square on Monday.

But in keeping with the controversy that has been the band’s trademark, singer John Lydon — known as Johnny Rotten at the time — was absent, having been scathingly critical of the project in interviews and even filing a lawsuit in a failed attempt to block use of the band’s music in the six-part show.

Based on Jones’s memoir Lonely Boy: Tales from a Sex Pistol, the drama tells the guitarist’s story of how a group of working-class teenagers formed the band in 1975, and became both reviled by the British establishment and adored by rebellious youth before their break-up during a chaotic US tour in 1978.

Racking up hits like Anarchy in the UK and God Save the Queen — an irreverent 1977 blast at the British monarchy — the Sex Pistols became a focal point for a punk revolution that inspired a generation of young Britons growing up in the 1970s during a time of economic hardship.

“I love the lack of deference, the country was riddled with deference to these stupid people ... and they just blew it up, and by blowing it up made it a lot better,” said Boyle, who won an Oscar for directing Slumdog Millionaire and first rose to prominence with the cult hit Trainspotting.

I think Malcolm McLaren is someone who had this vision of a boring dull England and wanted to kick it onto its arse and wake it up.

The Sex Pistols’ popularity was driven by their anarchic attitudes and sweary performances on live television, with God Save the Queen almost topping the official British charts amid the Queen’s silver jubilee festivities

In an echo of the events of 1977, Pistol is set to come out just a few days before a weekend of celebration for the Queen’s Platinum Jubilee — just as the cost of living crisis takes and hard economic times loom over Britain and the rest of the world.

“You hope a story swims into focus for the era you’re making it, but you’ve no idea. You make it because you feel a sudden connection to it,” Boyle said.

The series stars Toby Wallace as Jones, Jacob Slater as drummer Cook, Anson Boon as frontman Rotten and Louis Partridge as bassist Sid Vicious, who died from a drug overdose soon after the band’s rupture. The cast of young actors prepared by diving into music recorded long before they were born.

“I’ve never sung before. That’s the most special part of this show for me, is that every single gig you see we performed live. We spent three months in band camp learning how to play,” said Boon.

Slater said it was “amazing” that Paul Cook was on hand to help.

“He showed me some of the drum parts and stuff, which was very surreal,” Slater added.

The series also depicts life around the Kings Road boutique SEX run by Sex Pistols manager Malcolm McLaren, played by Thomas Brodie-Sangster, and fashion designer Vivienne Westwood, played by Talulah Riley, who defined the look of the band and the London punk movement.

McLaren, who died in 2010, is shown as a major character in the series, the band’s fanatic behind-the-scenes conductor.

“I think he is someone who had this vision of a boring dull England and wanted to kick it onto its arse and wake it up. And he used these young forgotten generation of boys as his tools to do it,” said Brodie-Sangster.

Pistol will be streaming on Disney+ in Britain and Hulu in the US from May 31.

Americans want stricter gun laws ... but not if the Democrats write them