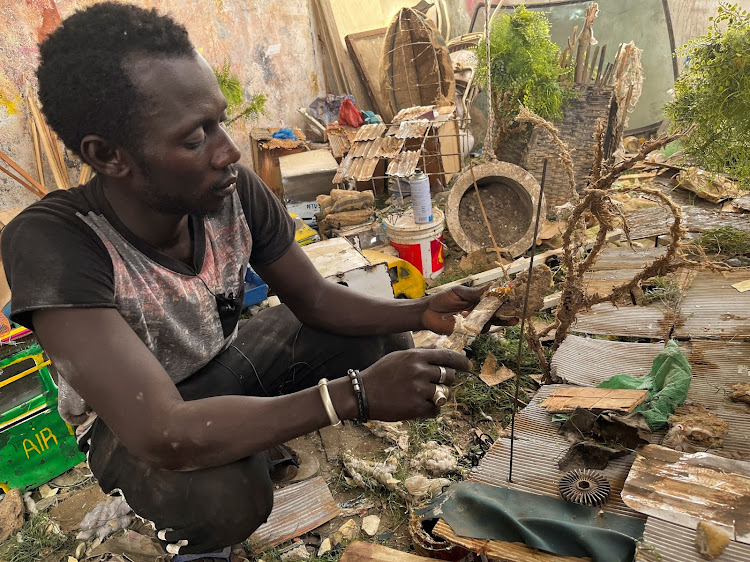 As the international art world flocks to Dakar for the African art biennale, Senegalese artist Fally Sene Sow only has to look out the window to find inspiration in the chaotic street market outside his studio in the capital.

Normally colourful and bustling, the area in Dakar’s Colobane district became much more sombre during the pandemic, prompting Sow to create an apocalyptic vision of what his neighbourhood could become.

The result is an installation that fills an entire room of about 30m², where model buildings are in a state of collapse, skeletons hang next to hybrid animals, thunder rumbles overhead and decaying waste generates heat, all of which create a foreboding atmosphere.

“It is mind-blowing,” said Ifeoma Dile, an art enthusiast who came from London to see the Dakar Biennale, which kicked off last Thursday. “I have goosebumps just looking at all this and how long must it have taken him to create that in this space. It is amazing.”

Sow is one of 59 artists or collectives officially selected for the exhibition — one of the continent’s oldest, large-scale celebrations of contemporary African art — which runs until June 21.

Expectations are heightened because this biennale, Dakar’s 14th, is being held two years late after the coronavirus pandemic forced a postponement in 2020.

I live at the heart of the market and so I have this theatre before me.

Sow, 34, has spent the last three years preparing for the show. His main creative tool is the rubbish he collects when he wanders around his street, including discarded building materials, plastic sheets and disposable cups.

When not focusing on his creation for the biennale, he uses scraps for his miniature street tableaux, delicately painting ramshackle market scenes onto glass for his updated take on traditional Senegalese “sous-verre”, or painting under glass, art.

“I live at the heart of the market and so I have this theatre before me,” he said at his cluttered atelier, giving the final touches to his mixed-media pieces before they went on show.

Sow’s intended audience is not the critics, but the people in his neighbourhood, particularly his miniature tableaux of street life. Painting recognisable scenes is a way to make art more accessible. “It’s a chance for me to guide them,” he said.

The biennale’s curators have a similar wish.

Over the next month, some 250,000 art lovers and movers and shakers of the art world are expected to visit shows at Dakar’s many galleries and its grand Museum of Black Civilisations.

But to draw the wider public into the festivities, a series of art installations, including a giant yellow dog statue, have cropped up along Dakar’s main coastal road, where many locals gather at sunset to exercise and catch up by the ocean.

Seeing everyday market scenes on canvas catches their attention and makes them laugh, he said, giving the artist a chance to convey the artwork’s deeper meaning.

Art is an investment to appreciate and the market is thriving