Antjie Krog and the role of the poet in SA’s social and ...

The writer affirms the literary as a resource for public life, insisting on the value of openheartedness with others 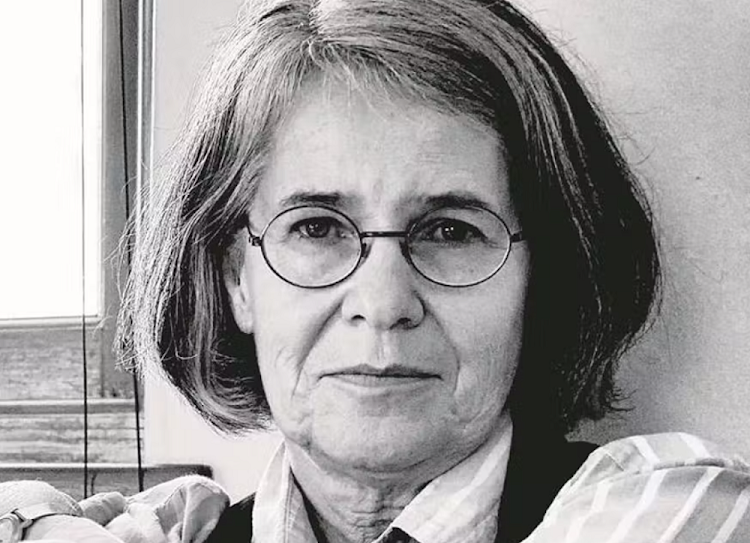 THROUGH HER EYES Antjie Krog from a detail of the cover of the book ''n Vry vrou (a free woman)'.
Image: Human & Rousseau

When South African writer Antjie Krog was just 17, she wrote a poem for her school magazine which was shocking enough to upset Kroonstad High’s parents. The furore caught the attention of Sunday newspapers, which descended on the Free State town.

The 17-year-old had expressed the desire to:

“build myself a land/where skin colour doesn’t count/only the inner brand/of self; where no goat face in parliament/can keep things permanently verkrampt/where I can love you,/can lie beside you in the grass/without saying ‘I do’/where black and white hand in hand/can bring peace and love/to my beautiful land.” (Translated from Afrikaans by Krog.)

Die Beeld newspaper repeated the poem, consulting Dr Ernst van der Heerden, poet and head of Afrikaans and Nederlands at Johannesburg’s Wits University, about whether it had value. His opinion was that Krog’s work was like that of famed poets Breyten Breytenbach and DJ Opperman. More press descended, the poem was published again (in English in the Rand Daily Mail). Her mother got involved in defending her writing. The poem appeared in ANC publication Sechaba. At the time, the party was in exile. Her father was summonsed by the Broederbond to explain how this could have happened.

This rapid set of events led to the publication of her first volume of poetry, Dogter van Jefta (Daughter of Jephthah), but without the offending poem appearing in it.

This year Krog turns 70 and her passion and commitment, forged in the 1970s, show no waning. For decades she has represented the important role a poet can play in public life in a fractured country.

That tale holds all the ingredients of Krog’s unfolding trajectory as a South African voice: an uncompromising stance about her experiences and thoughts, and a courage to voice them.

This year Krog turns 70 and her passion and commitment, forged in the 1970s, show no waning. For decades she has represented the important role a poet can play in public life in a fractured country.

With Dogter van Jefta Krog was immediately set on a path to become a serious poet, a writer mentored by Opperman and able to produce volume after volume, with the assurance that thousands would buy them. But the appearance of the poem in Sechaba and the London Observer gave Krog another audience, invisible and silent for many years, until the liberation movements were unbanned and the ANC returned to SA.

At a rally in Soweto in 1989 ANC cadre Ahmed Kathrada, newly released from prison, quoted Krog’s poem. How had he got his hands on it in prison on Robben Island? He thought it might have been in a magazine. It had so touched him he’d written it out by hand and kept it.

So Krog became a recognised poet in SA, but also a voice of dissent and hope for those in prison and exile. The two hallmarks of the poem, aesthetic-poetic and personal-political, and their entanglement, have since marked all her work as she has moved beyond poetry into journalism and nonfiction writing in English and as she has taken up an academic post at the University of the Western Cape.

Krog wrote book reviews for the press for some years before she became editor of the left-leaning Afrikaans magazine Die Suid-Afrikaan in 1993. But it was in 1995, when the public broadcaster’s radio team was gearing up to cover the Truth and Reconciliation Commission (TRC), that Krog stepped properly into news journalism. She became leader of the Afrikaans reporting team at the SABC.

Bringing a poet’s sensibility to journalism, Krog pushed the boundaries of radio reporting. She insisted the voices and sounds of those affected be foregrounded in the listener’s ear. Journalist Hanlie Retief called her “a disturbing conscience, an umbilical cord between the TRC and Afrikaans speakers. She … let the often macabre testimonies sometimes wail, sometimes sing.”

The constraints of news journalism irked Krog. In a great outpouring of energy she produced a nonfiction book in English which described the experiences of reporting the TRC, Country of My Skull. The book also told the powerful stories of victims and their families.

Krog has been busy with the same work since she was 17: using all her literary devices to get South Africans to see and listen to each other.

It was this book, with its blend of reportage, memoir, poetry and fiction, that propelled Krog onto an international stage. Hundreds of invitations were made to talk at conferences and the book became incorporated into university courses all over the world. Its power lies in the rawness of her experiences and unflinching descriptions, coupled with a worldwide attention to commissions of inquiry into past atrocities.

How South Africans speak to each other

Two more books followed as Krog took on creative nonfiction, A Change of Tongue and Begging to be Black. Working in English and Afrikaans, she did her own translations and brought out more poetry, such as Body Bereft/Verweeskrif in 2006.

Using this facility in both languages she also leant on her experience during the 1980s, at anti-apartheid rallies with poets reading in other African languages. She ventured into writing that worked in the spaces between translation, into the somewhat untranslatable. The notable book, There was this Goat, co-written with Nosisi Mpolweni and Kopano Ratele, took on a TRC testimony that had elements of the fantastic and bizarre.

Krog was present during the testimony and had read the official translation, but was dissatisfied with it. She, Mpolweni and Ratele worked on a retranslation. She had developed a preoccupation with how South Africans speak to each other, with how they listen and what they hear. As the authors write: “We became aware of the barriers we have to overcome, as well as the lengths we have to go to in order to arrive at some understanding of our fellow human beings.”

This project has become Krog’s university work. Though earlier she embarked on translation and transcription projects, they were of her writing or forays into older work in indigenous languages. Some were commissions, such as the translation of Nelson Mandela’s autobiography, Long Walk to Freedom, into Afrikaans. Now she works with a team selecting key historical texts, usually in a single African language, which are then translated into many South African tongues.

Krog has been busy with the same work since she was 17: using all her literary devices to get South Africans to see and listen to each other. In my doctoral thesis and my book on Krog, I summed up the role I see her playing in South African public life. It’s to affirm the literary as a resource for social and political life, bringing the personal into the political by asserting its messy, emotional and passionate dimensions, and by insisting on the very great value of open-hearted encounters with others.

Anthea Garman is a professor of journalism and media studies at Rhodes University in Makhanda.

U2 are fighting for all of us who love freedom: Bono rallies Ukrainians

Have young Americans woke-en up? Well, they’re not as liberal as we think