‘Stop shoving it down our throats, LGBT artists. Just be ...

‘Stop shoving it down our throats, LGBT artists. Just be fabulous’

Playwright Mark Ravenhill says the main aim should be to entertain, not push a political agenda on to audiences 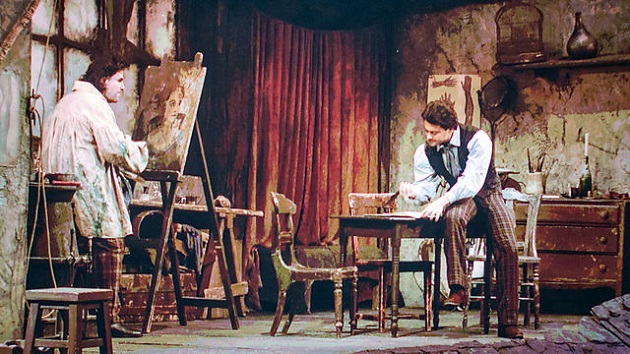 Known globally for his 1990s megahit Shopping and Fucking, Ravenhill said LGBTQ+ arts must first and foremost entertain; he even rewrote the official website description of his new opera to reflect that priority.

“I’m not particularly interested in art as an agent of social change,” he said ahead of Thursday’s gala opening.

“I think what we can do ... is emphasise the fun and joy of those things. We don’t have to say this is terribly socially important and here are the issues that we’ve covered.”

The show, which runs until May 28, has parallels with his life of 30 years ago, according to Ravenhill, who is now 55.

“A group of flat mates struggling to pay the bills; the arrival of a troubled and ultimately doomed newcomer; the hovering presence of the older man with money,” he recollected in the Guardian newspaper.

“I see that my 27-year-old self had a lot in common with Rodolfo and Mimi and their bohemian cohort.”

But there’s also just something joyful and beautiful and artistic about it. So (I’m) much more interested in how something like the LGBTQ thing can open up new, exciting, fresh stories.

Ravenhill said he made the gender swap for artistic reasons rather than to hammer home any LGBTQ+ message.

“I guess there’s something political about (giving the female role to a man),” he said.

“But there’s also just something joyful and beautiful and artistic about it. So (I’m) much more interested in how something like the LGBTQ thing can open up new, exciting, fresh stories.”

Ravenhill has been a long-time critic of the cliched state of LGBTQ+ arts, which he said too often characterised gay men as either dark and deadly or light and fluffy.

In 2007 he wrote a column for the Guardian, headlined “My pink fountain pen has run dry”, in which he said how “every time I try to write ‘gay’ I start yawning.

“Why do I have this strong sense that ‘writing gay’ is a project that is now totally over?”

Ravenhill laughed when reminded of his words of 15 years ago. But has no regrets, saying things “did get a bit boring”.

However, his interest came back with a “queer writers’ group” he ran at London’s prestigious and often experimental Royal Court Theatre, which launched the careers of playwright Caryl Churchill and Oscar-winning film director Danny Boyle.

“And suddenly it was a whole new generation and it was much more diverse,” Ravenhill said.

“There were trans people and there were nonbinary people (who do not define themselves as male or female) and there were a lot of women and black and global majority people in this group.

I had lots of opportunities to travel and see different cultures and different countries. So going from being able to afford a long weekend abroad once every year, I was suddenly just invited to travel a lot.

“And I thought: ‘Hang on, this is interesting’,” he added.

“It’s not like being stuck with the same skinny white boys in a room, which for me palled after a few years.”

Shopping and Fucking, which premiered in 1996 and explored themes of consumerism and sexuality, became a global sensation.

Alongside works by fellow playwright Sarah Kane, Ravenhill was feted as part of the 1990s British wave of newly confrontational “in yer face” playwrights.

And it changed his life – professionally and financially, he said.

“It got me into the bigger theatres and it got produced around the world.

“I had lots of opportunities to travel and see different cultures and different countries. So going from being able to afford a long weekend abroad once every year, I was suddenly just invited to travel a lot.”

Now, as co-artistic director of the King’s Head pub theatre since August, Ravenhill’s eyes are set on a new generation of LGBTQ+ talent, such as Robert O’Hara, an up-and-coming US playwright he is keen to work with.

As long as there’s still room for the old guard, he laughed.

“If it was too healthy they might squeeze me out, so I don’t want it to be too healthy.”

For Gucci, virtual currencies are in vogue