From black belts and tutus to jets and OnlyFans, Russia is out ...

From black belts and tutus to jets and OnlyFans, Russia is out in the cold

Sanctions against the country range from economic restrictions to cultural boycotts 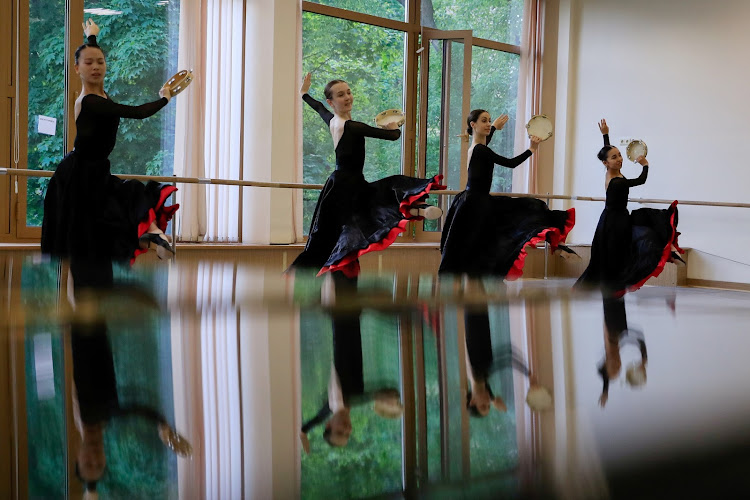 NOT EN POINTE The Bolshoi Ballet's summer season at the Royal Opera House has been cancelled.
Image: Novozhenina

Almost unilateral sanctions have rolled out against Russia and President Vladimir Putin in the past week after the invasion of Ukraine. Nato and the EU have waged a war of diplomacy, focusing on aid, sanctions and a war of words rather than direct military involvement.

These sanctions range from asset seizures and blocked transactions to disinvestment and pausing passports. Notable movements include the removal of key Russian banks from the interbank messaging system SWIFT, severing Russia from much of the global financial system, and banning 680 individuals and 53 entities.

These banned groups have had their assets in the EU frozen and are under a travel ban. Businesses and citizens based in the UK, EU and US are now prohibited from dealing with the Russian central bank, ending all US dollar transactions. The rouble has fallen from 84 per dollar on Friday to a record low of 105.27 per dollar on Monday.

“No country is sanctions-proof and Putin’s war chest of $630bn (about R9.7-trillion) in reserves only matters if he can use it to defend his currency,” an anonymous senior US administration official said on Monday. The country’s access to essential semiconductor products has also been restricted, limiting its access to technologies it needs to sustain its industrial and military capabilities.

Seizures, bans, oil restrictions and disinvestments are all essential elements of sanctions. However, organisations, businesses and countries have also implemented prohibitions against Russia’s athletes, artists and business people.

The International Judo Federation announced it was stripping Putin’s status as honorary president and ambassador “in light of the ongoing war conflict in Ukraine”.

The Russian president has also been stripped of his honorary 9th dan taekwondo black belt. World Taekwondo, referencing its motto, “Peace is More Precious than Triumph”, has said “brutal attacks on innocent lives” go against the sport’s values of respect and tolerance. “In this regard, World Taekwondo has decided to withdraw the honorary 9th dan black belt conferred to Mr Vladimir Putin in November 2013,” the governing body said.

The International Tennis Federation (ITF) has indefinitely cancelled all Russian events and will not hold any in Belarus this year “due to Russian aggression against Ukraine”.

Football is fully united here and in full solidarity with all the people affected in Ukraine, both (Fifa and Uefa) presidents hope the situation in Ukraine will improve significantly and rapidly so football can again be a vector for unity and peace amongst people.

Russian national and club football teams have been suspended from competition by Fifa and Uefa. Their joint statement said “football is fully united here and in full solidarity with all the people affected in Ukraine, both (Fifa and Uefa) presidents hope the situation in Ukraine will improve significantly and rapidly so football can again be a vector for unity and peace amongst people”. Uefa, after the announcement, also severed ties with Russian state-owned energy company Gazprom.

The International Olympic Committee (IOC) has withdrawn the highest award of the Olympic Movement, the Olympic Order, from Putin. Deputy prime minister Dmitry Chernyshenko and Dmitry Kozak, deputy chief of staff of the presidential executive office, have also been stripped of their titles. Furthermore, the IOC has recommended Russian and Belarusian athletes be banned from competing in all international sporting events.

“To protect the integrity of global sports competitions and for the safety of all the participants, the IOC EB recommends that International Sports Federations and sports event organisers not invite or allow the participation of Russian and Belarusian athletes and officials in international competitions,” the committee said.

Russia and Belarus have been suspended from all international rugby and club activities, the governing body said, adding: “World rugby reiterates its condemnation of Russia’s aggressive invasion of Ukraine and the facilitation of this action by Belarus. The global rugby family is united in standing in solidarity with everyone affected by these deeply disturbing events and joins the global community in calling for the restoration of peace.”

Twitter has been labelling Russian state media accounts for years, yet a new move will demote that content algorithmically. All content linked to state media will now also be labelled.

Since the invasion begun, the “overwhelming majority” of Russian propaganda has been shared by individuals rather than official accounts. More than 45,000 tweets per day have been shared this past week containing media from Russian outlets. Twitter has banned advertising from state-run outlets since 2019 and has now suspended all advertising in Ukraine and Russia since last week to prioritise public safety information.

The EU has announced the banning of Russia Today and Sputnik, two state-controlled media outlets, across the EU bloc. This move comes “to fight” Russian disinformation.

Several Russian media websites have been hacked and displayed an anti-war message. The hacking collective, Anonymous, who declared a virtual war against Putin and Russia due to the invasion, took responsibility for the hack. The message, signed by Anonymous and a group who say they are “journalist who cares”, reads: “Dear citizens. We urge you to stop this madness, don’t send your sons and husbands to certain death. Putin makes us lie and puts us in danger. We have been isolated from the whole world, oil and gas are no longer traded. In a few years, we will be living like in North Korea. Why do we need this? To put Putin in textbooks? This is not our war, let’s stop him!”

Adult site and subscription service OnlyFans locked out Russian users and creators last week. However, accounts and payment systems have now been reinstated.

Disney, the largest and most influential movie studio in the world, along with Sony and Warner Bros, have paused their theatrical releases. On Monday, a Disney spokesperson said “given the unprovoked invasion of Ukraine and the tragic humanitarian crisis, we are pausing the release of theatrical films in Russia, including the upcoming Turning Red from Pixar”.

The European Broadcasting Union said Russia would no longer be able to participate in this year’s Eurovision contest and the Royal Opera House has cancelled the residency of Moscow’s Bolshoi Ballet, one of the oldest and most acclaimed ballet companies.

“A summer season of the Bolshoi Ballet at the Royal Opera House had been in the final stages of planning. Unfortunately, under the current circumstances, the season cannot now go ahead,” the opera house said.

The Munich Philharmonic has fired its chief conductor, Valery Gergiev, after he refused to denounce Putin’s actions due to their close ties. Munich’s mayor Dieter Reiter announced, “with immediate effect, there will be no further concerts by the Munich Philharmonic Orchestra under his direction”.

The EU has closed its airspace to Russia, including to private jets. European Commission president Ursula von der Leyen said: “We are proposing a prohibition on all Russian-owned, Russian-registered and Russian-controlled aircraft. These aircraft will no more be able to land in, take off or overfly the territory of the European Union. Our airspace will be closed to every Russian plane. And that includes the private jets of oligarchs.”

Switzerland, clearly this time without the influence of ill-gotten gold and art, has announced it will forego its commitment to “Swiss neutrality” and adopt sanctions in line with the EU. Swiss federal president Ignazio Cassis said in a news briefing that “the Swiss Federal Council has decided today to fully adopt EU sanctions. It is an unparalleled action of Switzerland, which has always stayed neutral before.”

By Will Dunham
3 min read