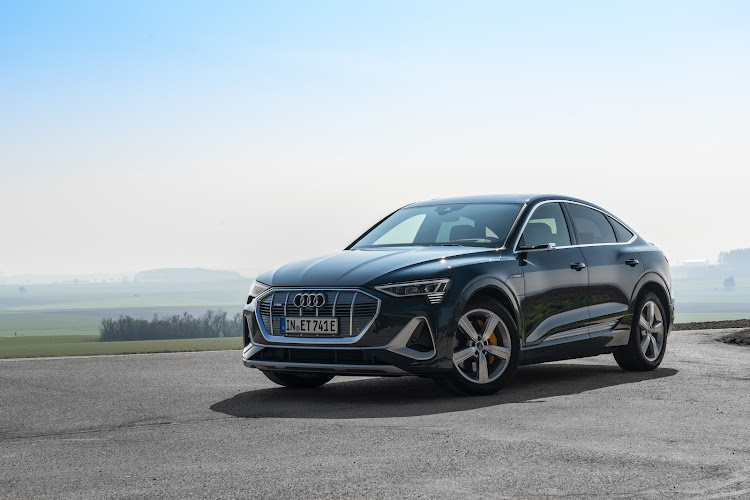 The Audi E-Tron Sportback is distinguished by its sloping roofline.
Image: Supplied

One thing you can expect to see more of from the motoring world in 2022 is an expansion of the electric vehicle genre. Before you get too excited, keep in mind that virtually all products currently destined for this sphere will come from premium manufacturers and carrying the expected price-tags.

Until a brand comes to market with a truly affordable battery-powered vehicle, perhaps under the R500,000 point, early adoption of the technology is destined for the well-heeled only. And in most cases, as a second or third vehicle to complement existing engine-propelled chariots in the garage. 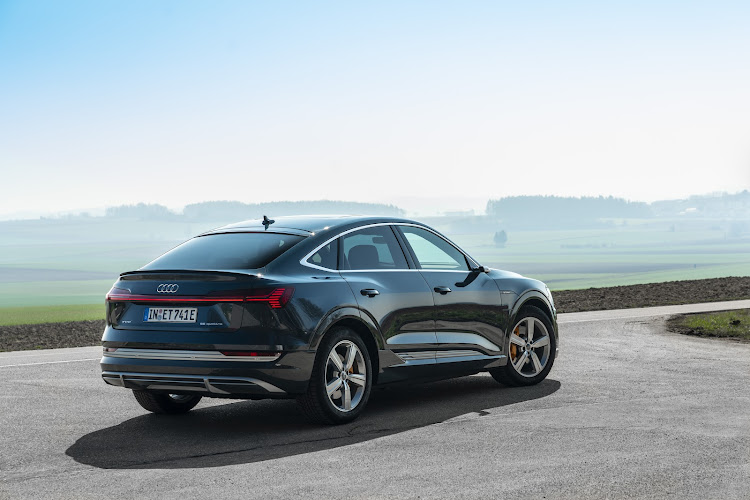 Converting to electric altogether — without the backup of transport powered by fossil fuels — would take some doing. Yes, the national charging infrastructure is growing, but you cannot dispute the sheer efficiency, from a time perspective, of an old-fashioned fill up, versus a (minimum) half-hour plug-in.

Then there is the question of range and long distance travel. And what about the overall longevity of batteries and the challenges of recycling at the end of the life cycle? Plenty of points to ponder about the shift towards electrification, but most will agree the technology is exciting and not without benefits.

BMW was the first of the main German trio to pioneer electric vehicles locally, launching the i3 and i8 in 2015, with hybrid versions of the 3-Series and 5-Series arriving as far back as 2012.

Last year Audi announced the introductions of the E-Tron range, which officially launches this month. The line-up consists of a sport-utility vehicle, including a Sportback version of this format, with a coupé roofline, as well as a high-performance GT saloon. We recently spent a weekend with the Sportback. 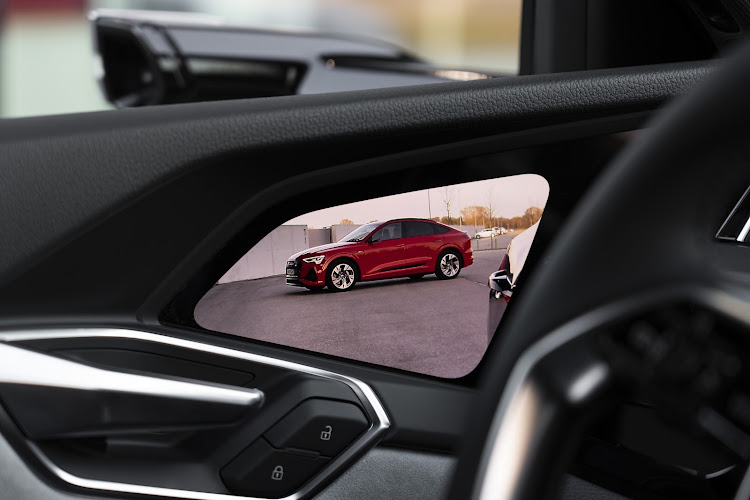 Digital side mirrors take some getting used to.
Image: Supplied

If you are accustomed to the Audi brand, the E-Tron Sportback, despite the obvious points of its electric powertrain, will be rather familiar in most aspects. Visually, the aesthetic hallmarks of the four rings brand are all there: a striking single-frame grille at the front, sculpted, edgy surfaces and a sophisticated, restrained sense overall.

The interior is sublime, as is usually the case with this brand. From the grain of the leather upholstery to the precision with which each button clicks, this is a cabin engineered with pedant levels of attention. Hang on a second. Where are the side mirrors? Our tester sported the optional camera-based setup, which projects visuals onto screens in the corners of the front doors.

That takes some getting used to and proved to be a source of frustration. Every time you intend to change lanes, you look at your “mirror” outside and realise you need to tilt your head downwards to see what is going on. Parking is a tricky affair because the display does not seem to offer an accurate perception of depth.

Consumers of electric vehicles will need a bit of time to get fully acquainted with the technical minutiae around the genre. We are no longer talking about cylinders, displacement or the usual metrics of fuel consumption, after all. The E-Tron Sportback 55 Quattro is powered by a 95kWh lithium-ion battery, with a peak output of 265kW and 561Nm. 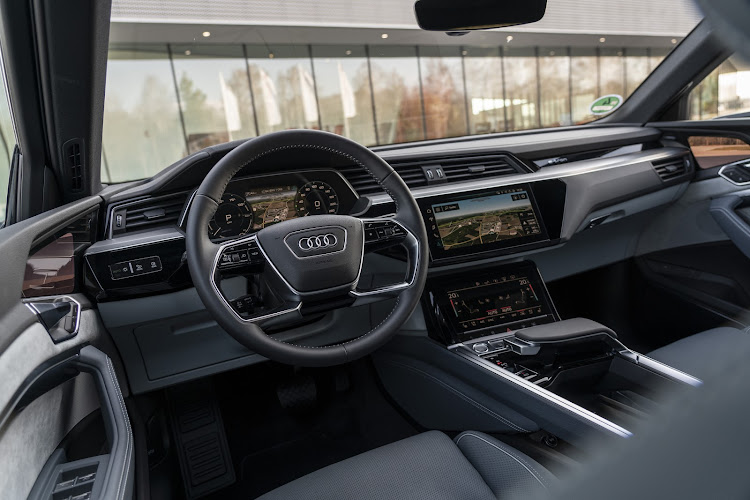 Instantaneous acceleration is a forte with electric vehicles — none of the delays associated with mechanical transmission. Even though the E-Tron weighs 2,520kg, it can hustle from standstill to 100km/h in a very expedient 6.6 seconds. Roughly the same territory as a Volkswagen Polo GTI.

The weight of the vehicle is supported by a rather competent pneumatic suspension, delivering an expectedly plush ride quality. Audi says the electrical consumption of the vehicle is 21.6Wh/100km, while range on a full charge is quoted at 453km. Over a 92km drive our average consumption was 30kWh/100km.

The E-Tron Sportback cruises in near silence at the national speed limit. Exterior tyre and wind noise is supressed rather well. Its brisk overtaking abilities are impressive too. Top speed is pegged at 200km/h. Not that you are likely to ever attempt it on public roads. 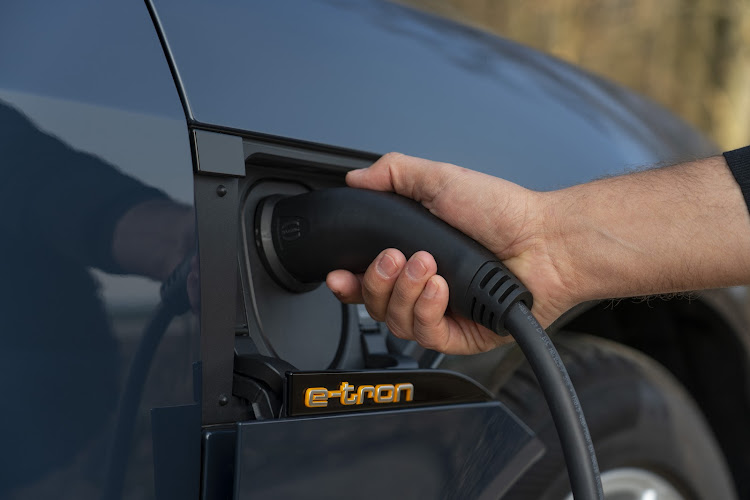 You can charge the E-Tron at home or a public facility.
Image: Supplied

What about the practicalities? There are 10 E-Tron dealerships that offer charging facilities (which accommodate other brands too), offering 50kW to 75kW DC charging. Audi will give its customers up to R5,000 towards the installation of a 32Amps industrial socket in an effort to support a charging point at home.

This allows for integration of single phase power — the most widely available power available in SA households — and the Audi E-Tron charger to deliver around 7.2 kW of power towards a 100% charge in an estimated 13 hours. 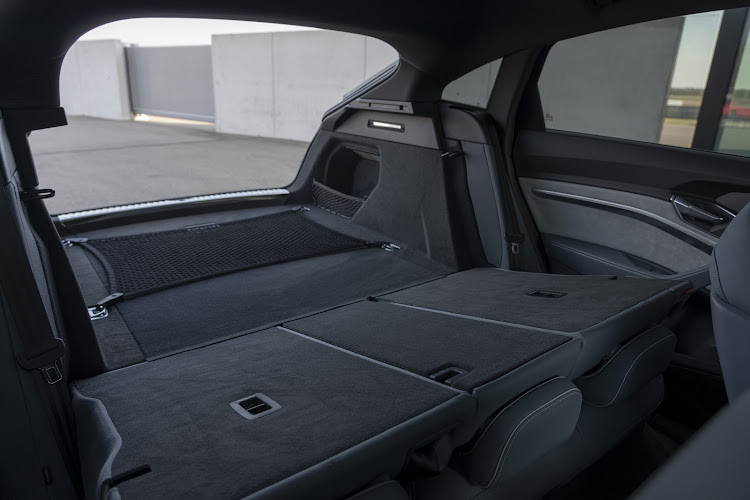 Last month Audi announced it would be partnering with Grid Cars, to be the first carmaker to install 150kW public charging points. With this, an Audi E-tron 55 will charge from 10% to 90% in approximately 30 minutes. Part of the roll-out includes 70 new charge connectors across 33 sites across the country and available to all electric vehicle drivers.

Expect to pay R5.88/kWh at a public station or R2.20/kWh charging at home. At this rate, a full charge on the E-Tron 55 Sportback works out to R559 at the former facility or R209 in the case of the latter.

Climbing the corporate ladder? Then this is who you should put a ring on