Stunt in the hand: to watch a big leap over writer’s block, say ...

A WORD IN THE HAND: STUNT

Stunt in the hand: to watch a big leap over writer’s block, say the word 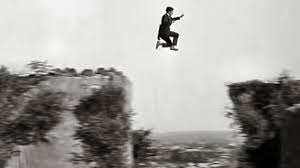 A friend asked me the other day how I come up with new words to write about each week. I replied that every word is effectively a new word, and there are millions of words, and every word or phrase deserves a column, therefore the possibilities are endless.

At this rather grandiose pronouncement, Cordelia (not her real name) issued a challenge.

She dared me to close my eyes, hover my hand over the page of whatever book I happened to be reading, and write a whole column about whichever word my finger alighted upon.

This is what I do with Wordle every day, except there sometimes have to be several tries before a word of five letters is the chosen one. Cordelia agreed to the condition that there could be three attempts, just in case the first words were “the” or “and” (which I could still write about, I the and assure you).

As it happened, I needed only one shot. I closed my eyes, opened my current book (a snack thriller by Alex Marwood) and stabbed my index finger at the page. When I opened my eyes, the word I’d landed on was “stunted”.

One’s imagination would have to be stunted indeed to not be able to do anything with that.

“Stunted” is the past tense of “stunt”, a verb meaning “to dwarf” or “to check in growth”, as in what some people do to trees with coils of copper wire and other crippling instruments of torture in what is known as the barbaric trend “bonsai”.

This meaning of stunt has been with us since the mid 17th century, but in Old English, stunt used to mean stupid or foolish, a derivation of an Old Norse word meaning truncated in the brains department.

It might be a little disturbing to some that “dwarf” is still freely used as a synonym for stunt, but if we divorce ourselves from politically correct metatwaddle and embrace the pure meanings of words, dwarf simply means short.

Someone once told me one should never make jokes about dwarves, because they have very short tempers. On the plus side, they get over it quickly, because they also have short memories.

There are now almost as many stuntwomen as there are men, and stunt work, despite a million safety measures, remains almost as dangerous as it was a century ago.

(Apologies to anyone who might take offence at the above. I assure you it is not meant pejoratively; it’s just wordplay.)

Stunt, stunts, stuntmen and stuntwomen took on other meanings in the 1800s, when “stunt” entered American sports slang as a noun, meaning (for reasons no one can explain) “a feat to attract attention”.

The Online Etymology Dictionary speculates that this leap into the acrobatic sphere was occasioned not by the Norse-derived stunt (meaning dwarfing) but was instead derived from the colloquial German “stump” (pronounced schtump), which meant a dare or a challenge.

I have never played the game “truth or stump” but perhaps others have.

Stuntpeople in movies arose (literally) in Hollywood’s Golden Age. Comedian Buster Keaton was one of the film industry’s first stuntmen, before insurance companies began to insist that those with “names” should not be cast into the path of danger and should instead be represented in derring-do acts on screen by their more limber and dispensable “stunt doubles”.

Some of Keaton’s most dangerous self-performed stunts included running across the tops of freight cars on a fast-moving train, writing off numerous vehicles, falling off tall buildings, having buildings fall on him, and too many others to mention without having to close my eyes in horror, which makes typing difficult.

Men were quickly joined by women in this scary career path. Mollie Gregory, author of Stuntwomen: The Untold Hollywood Story, said in an interview with Ripley’s Believe It or Not that in the era of silent movies, those who could not get hired anywhere else (“like Jews, immigrants, and women”) could work as stunt artists in myriad popular franchise films.

By the 1930s, however, the public appetite for crazy stunts on scene had grown to the extent that only men were employed to risk their lives in such a manner, used as stand-ins for both male and female actors.

There are now almost as many stuntwomen as there are men, and stunt work, despite a million safety measures, remains almost as dangerous as it was a century ago. As does column writing. But tell me, Cordelia, did I pull this stunt off?

There’ll be no more green in SA’s skies, and I’ve got the blues about it