The pitfalls of humility: the virtue can get too big for the ...

The pitfalls of humility: the virtue can get too big for the modest

For high achievers who had to start from the bottom, when does being down to earth become a trap? 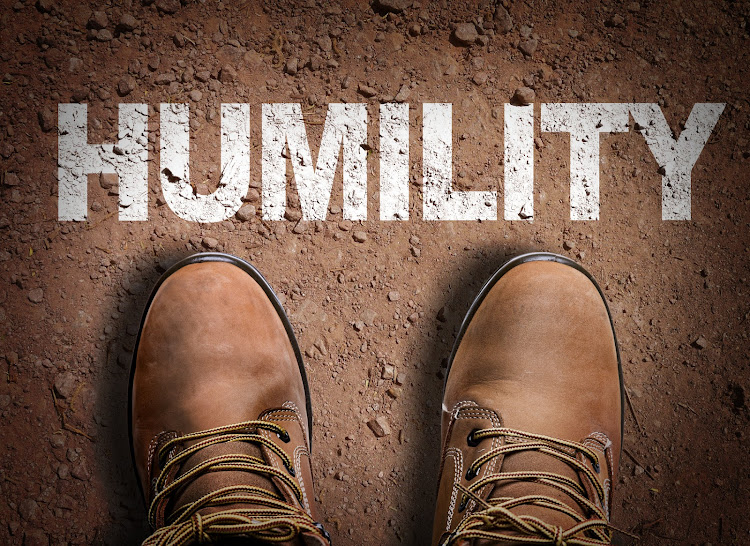 DOWN TO EARTH It is anticipated that a humble person is not proud but considers all humans equal.
Image: 123rf

An interesting and widely used adjective is “humble”. It is commonly defined to imply having a modest or low estimate of one’s stature. Demure, down to earth, lowly, meek, modest, unassuming, unpretentious are just some of the several synonyms for “humble”.

The common factor in all human beings, despite our dissimilar backgrounds or orientations, requires us to remain humble. It is either by choice or influenced by many other factors that some humans choose to be discourteous, impolite, rude, uncivil, unmannerly, disrespectful. It is anticipated that a humble person is not proud but considers all humans equal.

Let’s explore an individual’s lifelong journey with this adjective. It is often used when someone from a challenging or disadvantaged background achieves something. One will hear pundits of various forms noting an achievement is “sweeter” because the conqueror is from humble beginnings. The achievement is widely celebrated because the conqueror would have put in an extraordinary performance despite the odds. Understandably, the conqueror will go through certain emotions. As one may imagine, putting extra hours with limited resources to achieve one’s goal requires sweat and sacrifice. Of course, it does not imply advantaged people should not be celebrated for their achievements. They too require a high level of dedication, discipline and determination. They have the humility to acquire their achievements despite their fortune in life.

The conqueror moves to the workplace, where pressure to achieve targets, keep clients happy and make a profit is prioritised by all businesses. In summary, the conqueror must swallow their pride if it brings the desired results for the business. No matter the conqueror’s sacrifices, it is important these are executed within the confines of the business policies and values. This would probably ensure abuse of any individual is avoided. Can occasional humility invite fellow workers to take advantage of one’s character trait? Supervisors may allocate the conqueror more assignments because they never complain. Hence humility is necessary but requires firmness as well.

It is generally accepted human beings react differently towards their achievements. Let us assume the widely celebrated conqueror is a typical extrovert who is outgoing, fun-loving, friendly and talkative. It should not surprise many if that person is arrogant, assertive or extravagant considering the obstacles the conqueror had negotiated to achieve their goals. The expectation is that despite one’s achievements, one should always remain humble. Let us assume for reasons beyond anyone’s control, the life of the conqueror nosedives and the conqueror falls from the high horse he or she was riding. Enter the pessimists among us: life has humbled the conqueror. You may wonder, is this negative reaction a result of jealousy or an expectation that the conqueror was supposed to celebrate their achievement in conformance with the defined standards of the pessimists?

Finally, let us assume the worst-case scenario where the conqueror suffers a beating. There is mounting pressure on the conqueror to “eat humble pie”. With their never-give-up attitude, the conqueror starts their religious organisation. Without dwelling too much on the religious scriptures, many doubtful cynics may wonder whether the conqueror would convince the congregants to humble themselves before the Lord and, by doing so, he or she promises to lift those who do so.

It appears the honour of being labelled or characterised as being humble requires consistency, self-belief, resilience, discipline throughout one’s life. One can achieve it at a particular juncture in one’s lifetime. We should admire those who are always humble despite their achievements. However, this can easily be mistaken as being weak, indecisive and any other negative connotations. Is it not disappointing that humility, which is a powerful and meaningful virtue, is unfortunately associated with much negativity throughout the life of the conqueror?

I guess in the mist of all that is happening around us, it is fitting to conclude this piece with this quotation from an unknown source: “Stay humble and never think you are better than anyone else. We are all humans and crave acceptance and love.”

Unathi Mphendu is a public servant writing in his personal capacity.

Let’s curse darkness to remodel freedom in our lifetime