What happens to salt when it’s lost its saltiness is a ...

Why has SA shied away from its natural hegemonic position on the continent and the region for such a long time? 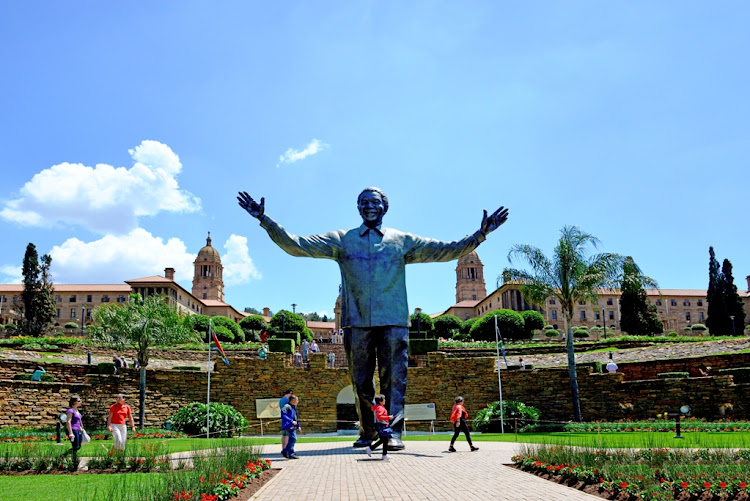 PUT THAT IN YOUR PIPE, AFRIFORUM The Nelson Mandela statue at the Union Buildings.
Image: 123RF/maxbaer

To enlarge the cake rather than racing to the bottom to fight over the crumbs should be our preoccupation. The continent is the space for growing the cake provided we do so with an ethical ethos.

Upon a successful political transition, Madiba immediately warned us about how we respond to our globally revered stature. He argued that should our political, economic and ethical conduct not rise to the occasion and respect with humility our acclaim for confounding the prophets of doom and averting rivers of blood, all that status will disappear like mist against the rising sun. But its disappearance will be more dramatic because it will be one from a high horse. We shall have become a disappointment to those who had so much faith in the success of SA, he said.

Indeed, faith they had in us. It was material but now it’s lost. On all fronts, matters hefty on the continent and globally would not go through without SA having a seat at the table. We lost this privileged position by our own making. We will be the ones to restore it. To remind ourselves of these, there are significant milestones that include but are not limited to the ones we are about to enumerate.

First, SA was on the right track during the late 1990s to the early 2000s, when our then trade and industry department made many intentional strides towards developing trade agreements to bolster regional economic growth and development. It was also during this time that we saw many in the private sector leading the charge and setting up businesses in these different countries, but to succeed they also needed the ethos Madiba expressed.

Second, the entire continent of Africa, including North Africa, had an explicit expectation that given the material advantage of huge industrialisation, SA would take the lead. This is the inheritance our leaders, including OR Tambo and Mandela, left us, but we have been reluctant to take hold of this endowment and pass the baton. There are many examples of SA’s noteworthy accomplishments when taking the lead on the continent. The MTN expansion is one such example.

When local telecoms company MTN deployed their GSM network on the rest of the continent, most notably in Africa’s most populous country, Nigeria, a lot of things changed there. There was now a working telephone company for the first time ever! Nigerians could now communicate more efficiently with each other and the rest of the world. The entire sovereign risk of Nigeria was redefined and quantified because of MTN. International banks were forced to understand this redefined sovereign risk, a move that helped catapult the country to a much better position economically.

Naspers, Standard Bank and many others followed. That was the beginning of making the African cake bigger and moving away from the fight over crumbs we see manifesting in different ways, especially in the Sadc region. Even our Afrikaans farming community started exporting their farming skills to the rest of the continent, leading the way towards realising the dream of an Africa that would be the breadbasket of the world one day.

Third, one of the biggest resolutions of the AU was for SA to construct the African rail network. This was based on our experience and the infrastructure we had already deployed in SA. Rail is important in promoting regional and global trade, and one of the ways we can lead the charge in infrastructure development in the region.

Rail development in the SADC region alone could potentially unleash trillions of rand worth of opportunities. A good example of the optimal use of this envisaged rail infrastructure would be connecting the huge Waterberg Coalfield area to Palapye coal in Botswana and to the huge deposits of Zimbabwean coal — all leading to a new deep-sea port in Mozambique.

If you do the maths on that alone, the potential 200-million tonnes a year of coal from these areas collectively would unleash at least R1.5 trillion into the SADC economy. Each mining town would need to build schools, clinics, hospitals, colleges, roads, houses, airports and many other necessities to support the coal mining, bringing about a multiplier effect that can only bolster our respective fiscus. This port city would be a different game altogether — a new city. Not to mention the number of jobs that would be created from such would solve most of the problems experienced at our jam-packed borders.

One may argue we have started to destroy our rail, and developing more rail infrastructure in the region would be like laying out a feast for the thriving rail raiders. But the flipside is that if this rail is benefiting everyone, the onus to protect it becomes a collective interest and augments the resources to prevent its theft.

Fourth, in my own work as a statistician-general, Stats SA always remained a preferred candidate to lead in the global challenges and hosted statistics’ equivalent of the FIFA World Cup, thus confirming Madiba’s interpretation of SA.

Fifth, there are some guiding moments that serve as a blueprint for regional integration and this in our history is significant. In this regard marena (monarchs) from parts of Southern Africa in 1908 met in Bloemfontein to discuss the political economy of the region. Among the representatives were Morena Maama Letsie, honourable Philip Molise and Josias Mopeli from Lesotho. Morena Lewanika of the Barotse, Morena Lekoko of the Barolong, Morena Marelane of the Amampondo, Morena Khama of Batswana, Morena Dalindyebo of the AbaThembu, Morena Dinizulu of AmaZulu and Morena Makhatho of Bakgatla. These monarchs became honorary presidents of the January 8 1912 summit that established the SA Native National Congress (SANNC), which later in 1923 became the ANC.

But sadly, SA continues to miss the opportunity to lead in the economic reimagining of our continent and therefore on all the benefits our leadership, with the impactful vision of creating a strong economic bloc, would provide us. (A typical example is the conspicuous absence of SA in the recent coal and rail discussions among Botswana, Zimbabwe and Mozambique). As a result of this, our region and continent are like a rudderless ship, where problems that could be averted by the realisation of economic abundance are mushrooming as a result of our failure to take charge!

Either way, SA has to pick up that baton and lead again. As a start, we need to move past this seemingly continental poverty of thought and begin a continual enrichment of our thought processes where the development of our continent is concerned. And maybe for the time being, this is where SA could take the lead and pave the way to eventually cementing its role as the African hegemon.

Why has SA shied away from its natural hegemonic position on the continent and the region for such a long time now? One would have thought by now we would have taken ownership of this and advanced the African cause most notably.

But like Madiba warned, let us take heed of Matthew 5:13 who puts it succinctly: “You are the salt of the earth. But if the salt loses its saltiness, how can it be made salty again? It is no longer good for anything, except to be thrown out and trampled underfoot.”

Dr Pali Lehohla is a professor of practice at the University of Johannesburg and the former statistician-general of SA, Thami Mtshali is a chemical engineer, a manufacturer of Galela Health Organics and an astute businessman, and Bontle Headbush is an economics journalist

Renting a car? Get to the bottom of it before the waiver wavers