I scream, you scream for icebergs to sink the fat down this ...

A WORD IN THE HAND: ICE

I scream, you scream for icebergs to sink the fat down this rabbit hole 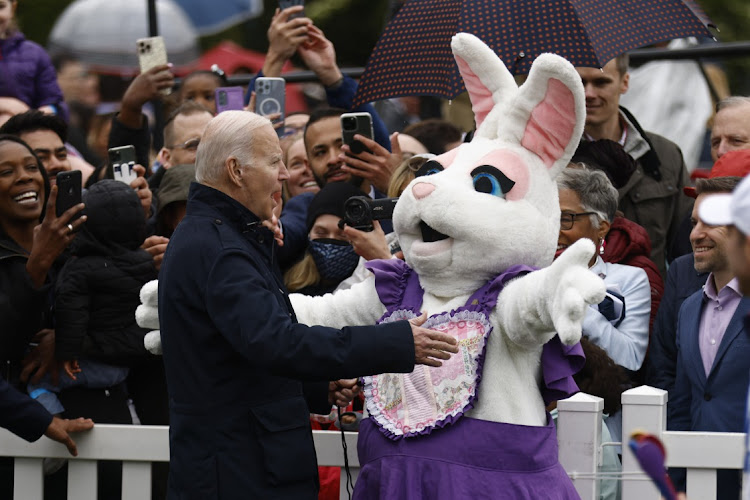 BIDEN EASTER EGGS US President Joe Biden and the Easter Bunny during the Easter Egg Roll at the White House.
Image: Ting Shen/Bloomberg

The first person to accuse me of going down rabbit holes (unfairly, I thought) was an English professor in his red-pen comments on my (overly long but excellent, I thought) essay about the lacklustre literary figures of the 1930s.

“There is too much here,” wrote the unsympathetic professor. “You explore too many things instead of clutching like a bulldog onto one theme.” He concluded with a backhanded compliment that still smarts: “At best, you have a flair for the telling phrase.”

I’ve spent the last two decades trying to prove this learned academic wrong. I can hold doggedly to a topic without straying into a warren of side burrows. Really, I can.

Take the topic of today’s column: ice, or, more specifically, icebergs. You know, that thing that sunk the Titanic and after which a type of lettuce is bizarrely named.

I was put in mind of icebergs by the press release forwarded to me by a friend, in which one of SA’s major financial institutions declared that the millions of flood-related claims it had received were “only the tip of the icebag”.

One might think that icebreakers, those dreadful games in which one is forced to talk to strangers, would be a more modern phenomenon, but the OED tells us that the metaphorical sense of ‘breaking the ice’ dates back to the 1500s.

“Icebag” instead of “iceberg” qualifies as a mondegreen, an amusing grammatical disfigurement about which I have written before, so I’m not going to segue into a discussion of this concept.

Let us stick to ice. This is an ancient word which began to be spelt the way we know it in about the 1400s. It comes from an Arabic root meaning “frost” and has been amended many times in its cold history.

In 1906, gangster types began using “ice” as a slang word for diamonds. To “keep something on ice” (as in put it away until it is needed) was a phrase that arose in the 1890s, says the Online Etymology Dictionary. The phrase “to be on thin ice” — in a dangerous position — was coined in the same decade.

One might think that icebreakers, those dreadful games in which one is forced to talk to strangers, would be a more modern phenomenon, but the OED tells us that the metaphorical sense of “breaking the ice” dates back to the 1500s.

As for “berg” which we know as the end part of the name of not only mountains but hundreds of towns in SA, it is a very old word of proto-Indo-European descent, meaning “high”.

I can promise you I was not high when writing this column, but I could not help but recall the drug-addled chefs described by author Imogen Edwards-Jones in her 2014 book, Restaurant Babylon, a highly enlivening semifictional account about what really goes on behind the kitchen doors of the world’s top restaurants.

Many readers might be familiar with the word “fatberg” but I had not encountered this horrific concept before reading Edwards-Jones’s account of it.

According to Wikipedia, a fatberg is “a rock-like mass of waste matter in a sewer system formed by the combination of flushed non-biodegradable solids, such as wet wipes and fat, oil and grease deposits”.

Restaurant Babylon describes in great detail the fatberg that bursts the sewerage pipes of a prominent London restaurant. I advise those of faint stomach to avoid this book.

In real life, there have been many famous fatbergs, particularly in older cities with antiquated plumbing.

In 2017, a fatberg was found in the suburb of Whitechapel in London, also famous for the bloody deeds of Jack the Ripper. It weighed 130,000kg and stretched in the underground pipes for more than 250m. With much money and manpower, this ugly mass was converted into biodiesel. If you happen to find yourself in Whitechapel, look for the embossed memorial manhole cover celebrating this monstrosity.

But let’s get back to ice, since we are not going down manholes or rabbit holes. I have had many conversations with fellow writers about whether ice cream should or should not be hyphenated. The OED gives “ice-cream” for the noun, but the Sunday Times style guide disagrees (rightly, I think) because the two words are an adaptation of the term coined in the 1680s as “iced cream”, which would not be hyphenated. Therefore I think it correct to say, “I ate ice cream” but if used as an adjective, a hyphen is correct, as in, “I ate an ice-cream cone”.

Speaking of cones, I always thought that Coney Island, a part of New York which I have sadly never visited, got its name from the ice-cream cones sold at amusement-park outlets.

I changed my mind after watching The Sopranos (one of the best TV series ever made, if you ask me), in which miscreants and traitors were disposed of from this place. Given that “ice” became a slang verb for murder or assassinate, this seemed the more likely etymology.

Both suppositions are wrong. Coney Island was named for the rabbits that used to run wild on the windy peninsula. A “cony” was the English word for a rabbit in the 1200s, derived from the Latin cuniculus.

A century later, the English came up with the word “rabbit” as a term to describe baby coneys.

Oh wait, I forgot. We were talking about ice. Next time, perhaps.