From humble beginnings in the Eastern Cape and KwaZulu-Natal, the African king of music is taking over the world 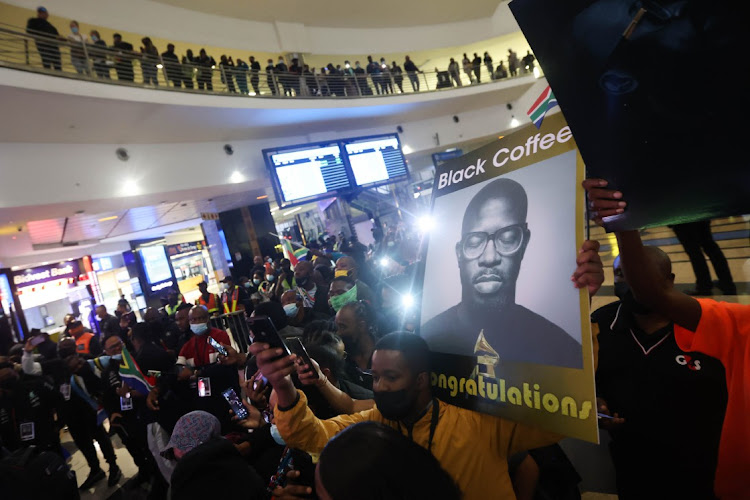 OUR HERO Fans gathered at OR Tambo International Airport to welcome Black Coffee after the internationally acclaimed DJ won a Grammy at the 64th annual awards in Las Vegas at the weekend.
Image: Alaister Russell

It felt like the inevitable had been realised. Like the bones thrown decades ago had been read and fulfilled. When Black Coffee stepped on stage at the prestigious Grammy Awards at the weekend to accept his award for Best Dance/Electronic Album it was confirmation that the world has finally seen the African king of music as we do.

There is something deeply poetic in the name Black Coffee chose for his music festival: Music is King. It is one of the highest-attended events on SA’s music calendar and showcases the best and brightest young South African talent.

Yet everything from its name to its execution shows a deliberate attempt to put others in the spotlight. Music is the focus; let us not forget that. Let others be the main act; let us look to them.

And yet it was Black Coffee whose name was called on that Las Vegas stage and who will forever be written in music history as the first South African to be nominated in and win a Grammy in that category.

He prefers not to do the talking, delegating that responsibility to others in his team when afforded the opportunity.

When the glaring lights demanded a speech, he simply thanked God for music’s power to heal and put the focus on his fans, family and team.

When confronted by a global audience lingering on his every word, he dedicated his win to the African child.

“For the African kids who were watching, who come from where I come from, who may think they don’t stand a chance to get on a global stage; I want to say to them: it’s possible.

“The award isn’t just for me. It’s to show them that this isn’t about music alone either. It’s about anything they may want to do. This Grammy, for me, is a symbol of that. That it’s really possible to get here, by the grace of God,” he told Sunday Times Daily.

It is a quiet humility I have seen many times in my interactions with him over the past near-decade, but it is also a passion fuelled by his upbringing in the Eastern Cape and KwaZulu-Natal.

Born Nkosinathi Innocent Maphumulo in Umlazi, south of Durban, in 1976, he moved to Mthatha in the Eastern Cape with his mother and spent many of his formative years in the province.

It was there, on the day of Nelson Mandela’s release from prison, that he lost the use of his left arm when he was one of the dozens of people run down by a taxi driver. The incident left him with physical and mental scars he would carry for decades.

After high school he headed back to KZN to study music at then Natal Technikon, majoring in jazz. He did not complete his studies, but the relationships he built on his return to Durban would be the first footsteps he would take on the path to greatness.

In the Eastern Cape he experienced an upbringing that was filled with struggle, but also joy. In a world where everyone was your neighbour, teacher and parent, he saw the best of community and ubuntu, and the worst of addiction, poverty and hopelessness.

He spoke occasionally of it, the need to break through mental chains and empower yourself. He empowered himself and found healing through music.

He grew up listening to several genres and said even as a child he dreamed of playing music internationally. He would produce music at home with the most rudimentary of instruments, but the most complex and creative of minds.

The passion had been kindled and would soon burst into flame.

After high school he headed back to KZN to study music at then Natal Technikon, majoring in jazz. He did not complete his studies, but the relationships he built on his return to Durban would be the first steps he would take on the path to greatness.

He and two friends, Thandukwazi “Demor” Sikhosana and Mnqobi “Shota” Mdabe, worked with acclaimed musician Madala Kunene before forming their own group, Shana.

Shana made waves in the industry with its refreshing and ambitious sound. This helped land Black Coffee his first residency. The gig, at Voodoo Lounge nightclub, was a foreshadow to major residencies in Las Vegas and Ibiza.

In 2003 he was one of two South Africans accepted into the Red Bull Music Academy, where he sharpened his craft and broadened his repertoire. He had a taste of the life he craved as a child and grabbed it with both hands.

He released his self-titled debut album in 2005, featuring a remix of Hugh Masekela’s Stimela and the timeless classic Happiness, and at the same time worked to bring others up with him through his newly formed management company Soulistic Music.

He was hailed as a pioneer of house and experimental dance, and took the new sound across the length and breadth of the country. He made the occasional trip to Europe and the US, where he worked hard at evangelising for the new sound and introducing new disciples to the masses.

Several artists worked with the DJ and Soulistic Music, including Culoe De Song, Nakhane Toure, Da Capo, Tumelo, DJ Kabila, Bucie, Zakes Bantwini and DJ Shimza. All of them amazing talents in their own right, but amplified by Black Coffee on the world stage.

By the time he released his third album, Home Brewed, in 2009, Black Coffee was dominating local stages and planning the next phase of his global takeover.

He launched the Black Coffee Foundation in 2010 and started playing overseas with more regularity. It paid off a year later when he was nominated in the Best Worldwide Act at the 2011 MTV European Music Awards.

He was winning awards locally, including Channel O Awards and SA Music Awards, and it wouldn’t long before his name would be mentioned regularly at major international award ceremonies.

They are the reason I work so hard. When I was young I had a dream. It was what kept me going. I want my children to also follow their dreams and realise that it is achievable.

After several sold-out international shows, Black Coffee kicked off a world tour spanning four continents in 2015 and crowned the year with two international DJ awards, for Breakthrough DJ of the Year and Dance Nation of the Year.

He would add to that haul a year later with the Best Deep House DJ, an award he would win three years in a row. He also made history in 2016, becoming the first South African to win a BET award for Best International Act and perform at the prestigious Coachella Valley Music and Arts Festival in California.

By now his talent was undoubtable and he counted the likes of P Diddy, Alicia Keys, Swiss Beats and Paris Hilton as his friends. In the years that followed he would work with and get endorsements from, among others, David Guetta, Usher, Drake, Jay-Z and Beyoncé.

When not touring the world Black Coffee held residencies for multiple seasons in the party capitals of Ibiza and Las Vegas.

Despite his global fame he always made time to come home and once told me that his family was worth more to him than any residency or award.

“They are the reason I work so hard. When I was young I had a dream. It was what kept me going. I want my children to also follow their dreams and realise that it is achievable.”

Black Coffee’s legacy will not only live on through his music and children, but in an arts school he founded with two other celebrated SA creatives, artist Nelson Makamo and designer Laduma Ngxokolo.

But for a man who is building an empire every day and should be at the peak of his confidence, Black Coffee has admitted on occasion to having impostor syndrome or feelings of inadequacy.

He has spoken openly of self-sabotage out of fear of not being good enough. It is a candid admission that explains his putting the spotlight on others when should have been on him, and shows that from the very beginning, music chose him as king.

And the category is: best use of media to discredit itself