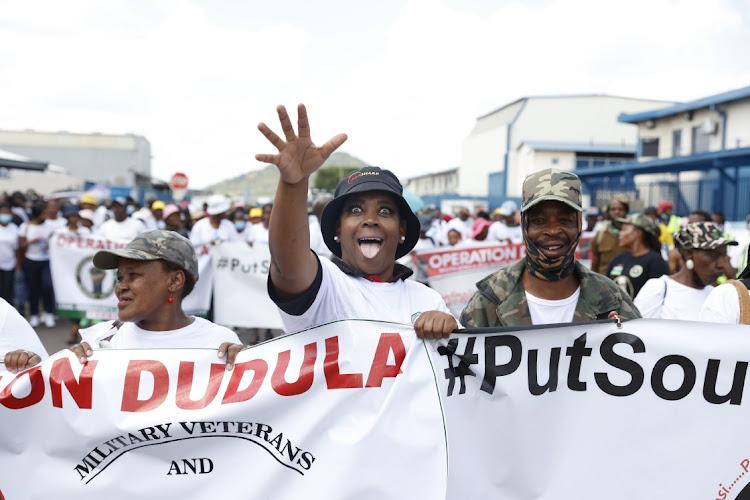 Once relegated to the margins of South African politics, anti-immigrant activism has gone mainstream. Several such groups, including Operation Dudula, the All Trucker Foundation and the South Africa First Party, have become reference points for national debate.

Reflecting forms of radical protectionism, they channel the frustrations of South Africans with corruption, crime and unemployment. The results are campaigns to “clean” the country of immigrants, home invasions and widespread threats and violence.

This is not a response to an immigration crisis. Immigrant numbers are not higher than they have been for a decade. This is a crisis of constitutional credibility.

Anti-immigrant activism is politics by other means, with violence likely to become common amid fundamental ruptures in governance. After years of unfulfilled promises, a youthful citizenry has lost considerable faith in formal electoral politics.

Popular embrace of nationalism, street justice and anti-immigrant activism reflects the ascendancy of an extralegal order. That regime is a mix of formal institutions and local fiefdoms held together by patronage and coercion. That system is now unravelling.

The post-apartheid system of indirect rule has been expedient for the governing party. Rather than extend its presence into cities whose populations swelled in the post-apartheid era, it closed party offices.

During apartheid, local gangsters often made alliances with the apartheid state. Some justified their violence and venality as a strategy to make the country ungovernable. This latter group, the “comrade tsotsis” (young thugs so-called for claiming to being anti-apartheid activists), later connected with the postapartheid governing party, the ANC. This allowed them to maintain local influence with the tacit permission of the ANC. The opposition IFP has similarly relied on its sometimes violent network of hostel leaders.

This created a system of “indirect rule”, reflecting a similar logic to the colonial administration where local “chieftains” worked in complex patronage networks to keep public order. But where the gangsters once worked under the national government, the police and officials now appear to answer to vigilantes, participating in Dudula raids under “sole authority of the local community”.

The postapartheid system of indirect rule has been expedient for the governing party. Rather than extend its presence into cities whose populations swelled in the postapartheid era, it closed party offices.

Under the country’s party list system, locally elected municipal councillors are often absent or powerless. Viewed from the perspective of the historically neglected black residential areas and informal settlements, elected officials are often more committed to pleasing the party than the people they ostensibly represent.

The dominant parties maintained this system of indirect rule, relying on civic associations, local chiefs and other “community leaders” to deliver votes and maintain order over two decades.

Unwilling or unable to displace them from local positions of authority, national, provincial and municipal governments negotiate with them, further entrenching their power. The challenge now is that the political and economic resources the three spheres of government used to maintain this system are dwindling.

SA’s economic crisis means there are fewer government tenders available and less money for social programmes. More importantly, the dip in ANC support below 50% in the 2021 elections means party and bureaucratic bosses now face uncertain futures. Amid this, upstarts seeking opportunities and jockeying for position engage in new alliances, mobilisation and violence.

To be sure, more is going on than a crumbling patronage system. South Africans would generally prefer less immigration. There has been no time in the past two decades where they have broadly welcomed newcomers. Covid-19 has worsened concerns about immigration, as youth unemployment hovers near 70%.

There is clearly cause for anxiety. Politicians with few plans for addressing this gap have capitalised on these attitudes.

Yet these widespread trends do little to explain the violence in specific places, at particular times, or why it is so difficult to counter. Anti-outsider violence is not universal nor always aimed at immigrants alone.

It is also not easily explained by poverty. Many of the poorest areas have remained peaceful, while more prosperous ones have not. Instead, violence tends to occur repeatedly in specific neighbourhoods because of localised political power games.

Working together, two groups in Mamelodi have filled the political and regulatory vacuum. One is the South African National Civic Organisation. The other, the Phomelong Residents Association, is a local informal group headed by self-appointed leaders. Those wanting to build, do business or even transport goods through the area pay them or get out.

One example from our research in Mamelodi, outside Pretoria, illustrates this.

Its population growth has outpaced any type of state intervention, police control or service provision.

Working together, two groups have filled the political and regulatory vacuum. One is the South African National Civic Organisation. The other, the Phomelong Residents Association, is a local informal group headed by self-appointed leaders. Those wanting to build, do business or even transport goods through the area pay them or get out.

To finance their protest and political activities, the two groups plunder foreign-owned shops and businesses. Like the self-financing armies of old, protesters are given licence to loot. One leader reported that when protesters feel hungry, they go and get food from shops to eat or take home to cook. If shops there are closed, they go to those in other locations.

Through the distribution of resources and the eviction of foreigners, the associations legitimate their form of rule, positioned as gangster intermediaries. With popular support, they then demand attention from municipal authorities. Cleverly, their leaders borrow the language of continued black deprivation and need for “radical economic transformation” to legitimise themselves.

Another example of this indirect rule is Philani, outside Durban, a poor area largely neglected by local government. In early 2019 the Delangokubona Business Forum displaced and kidnapped about 50 foreigners living in the area.

Claiming to champion “black economic empowerment”, it accused them of blocking the economic advancement of poor black citizens.

It extracted ransoms from their families and friends, while negotiating with the government for their safe return. Successful on both counts, it positioned itself as intermediary and peacemaker — the de facto local authority.

As in other cases in the country, these groups effectively create multifaceted protection rackets. Increasingly (and implausibly) claiming to be military veterans of the anti-apartheid struggle, they use violence to create instability and instil fear to extract resources and establish legitimacy.

These actions create powerful local forces that demand payment from any state development projects in the areas they control. This way, the state is able to preserve the appearance of authority and constitutionalism while allowing someone else to do the dirty work of keeping people in line. But trouble ensues when the developers can no longer pay or other parties are eyeing the booty — money, houses, businesses and votes.

Given the legacy of indirect rule, it is unclear who the government can call on to rein in the violent leaders who effectively govern some townships. Or, indeed, if it has the desire or popular legitimacy to do so. Impunity for past misdeeds has emboldened these groups, strengthening them so much that police respond to them rather than the other way around.

Authority to decide who lives where, who does what and what are appropriate standards of behaviour rests with them rather than the constitution or town councils.

SA’s national action plan on xenophobia calls for conversations and dialogue with these groups. This is precisely the system they have manipulated to entrench their power.

Ending violence against foreigners and true economic recovery can only happen by recognising — and addressing — the hazards of SA’s crumbling system of indirect rule.

Loren B Landau is co-director of the Wits-Oxford Mobility Governance Lab and Johannesburg’s University of the Witwatersrand, while Jean Pierre Misago is a researcher at the institution.

Musk loves Twitter so much he bought stock in it ... and got $1bn richer