Google’s ‘Mali Magic’ is drawn from a library association’s 80,000 documents, with the latter hoping to publish 242,000 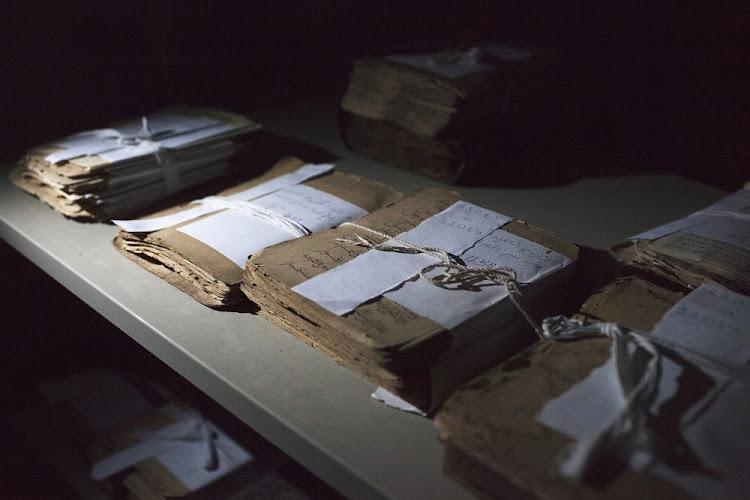 PRICELESS Islamic manuscripts from the 13th to 15th centuries are seen at the Ahmed Baba Centre for Islamic learning in Timbuktu.
Image: Joe Penney/Reuters

The ancient Timbuktu manuscripts of Mali are back in the headlines after a Google initiative to host a collection of them in an online gallery. The images of the documents, with text in Arabic, can be found on a page called Mali Magic.

No place in West Africa has attracted more attention and resources than the city that has always captivated the imagination of the outside world, Timbuktu. There have been documentaries and books, academic studies and a renewed public interest since some of its world heritage status buildings were damaged by attacks in 2012. The manuscripts, some reputed to date back to the 1400s, were threatened and the international community responded.

While Mali Magic displays 45 manuscripts from one private library, the site doesn’t begin to tell the full story of the wealth of West Africa’s manuscripts that are found from the Atlantic to Lake Chad.

But thanks to decades of scholarship and, recently, digitisation, that information is now accessible at a bilingual, open-access, online union catalogue of nearly 80,000 manuscripts at the West African Arabic Manuscript Database. This is a resource I began 30 years ago at the University of Illinois that now provides students access to most of the titles and authors that make up West Africa’s manuscript culture.

It’s at this website that one can access the archive of an association of 35 private Timbuktu manuscript libraries, called SAVAMA-DCI. The association has been working with universities on three continents to secure and record, now digitally, their Arabic and Arabic-script manuscripts.

The West African Arabic Manuscript Database provides an even bigger picture. It is a comprehensive inventory of more than 100 public and private West African manuscript libraries. In it, we find a third of all extant manuscripts with known authors (314 titles), written by 204 scholars, a quarter of them from West Africa. Most come from the 1800s, but have deep historical roots.

The full story of West Africa’s manuscript culture and Islamic learning centres will finally be known when the attention that is lavished on Timbuktu’s manuscripts is given to libraries in neighbouring Mauritania, Niger and Nigeria. But we already know a good deal.

The earliest contact between North Africa and Timbuktu focused on West Africa’s gold trade. This commerce also brought Islamic teachings across the Sahara Desert. The first reference to manuscripts in Timbuktu was in the 1400s, contributing to the mystique that has always enveloped the city as a centre of Islamic education.

The subject matter in each category varied from one library to the next. But the dominant subject, legal writing, tended to account for a quarter to a third of all the manuscripts.

Timbuktu was one of several southern Saharan towns that attracted scholars and offered Islamic learning. In the 1500s, what is called Timbuktu’s Golden Age, its famous scholars were known across North Africa.

That period waned, but Arabic learning revived in the 1800s across West Africa in the wake of several Islamic reform movements that stretched from today’s Guinea and the Senegal River Valley to northern Nigeria. Today’s older West African manuscripts mainly date from this period.

With the decline of scholarship in Timbuktu in the 1600s, Islamic learning emerged in nomadic centres to the west (today’s Mauritania). There’s also a national collection of manuscripts there that is based on the contents of about 80 private libraries. They give us a good idea of what was traditionally found in manuscript libraries.

The subject matter in each category varied from one library to the next. But the dominant subject, legal writing, tended to account for a quarter to a third of all the manuscripts.

West Africa’s manuscript culture evolved, for the most part, outside any state system. In the absence of a central authority, juridical matters were dispensed by local legal scholars who could cite precedent, case law, to resolve thorny problems.

The next most important subject in the manuscripts deals with the Prophet Muhammad, mainly biographical and devotional writing. The ratios of manuscripts dealing with mysticism (Sufism); the Qur’an (including copies of the Holy Book), especially recitation styles; Arabic language (lexicology, syntax, prosody, pre-Islamic poetry); and theology vary, each subject accounting for 7% to 13% of the manuscripts in most libraries.

Locally written poetry and literature is generally the smallest slice of manuscripts, albeit, with correspondence, some of the most interesting. Oddly, history, like geography, is almost entirely ignored in many collections.

This reminds us that Arabic, and by extension Arabic script, was at base a religious language used for religious purposes, its use for secular subjects uncommon.

The power of the Arabic alphabet

More significant than these Islamic sciences or disciplines are the uses to which the Arabic alphabet was applied across West Africa. Arabic uses a phonetic alphabet; each letter always produces the same sound. What this means is that the Arabic script can be used to write any language.

Opening these manuscripts to scholars worldwide to learn about the intellectual life in Africa before colonial rule promises to help re-balance the continent’s place in world history.

To explain the Arabic of the Qur’an, teachers frequently translated key words into the students’ African language (written in Arabic script). Many West African manuscripts that were used in teaching show these interlineal insertions. From this practice it was an easy step to write classic legends or memory aids, or poetry in African languages, all in Arabic script.

The name this writing is given in Arabic is “`ajamī” (writing in a foreign language). These manuscripts make up about 15% of most collections in West Africa today.

In some areas whole Arabic books are available in `ajamī form. The African languages that have been adapted to Arabic script are many, including Fulfulde, Soninké, Wolof, Hausa, Bambara, Yoruba and the colloquial Arabic spoken in Mauritania, Hasaniyya.

In recent times `ajamī writing has been increasingly used, but in historic manuscripts its use tended to focus on traditional healing methods, the properties of plants, the occult sciences and poetry.

Google’s new online library is drawn from the collection of SAVAMA-DCI’s director, Abdel Kader Haidara. In 2013 he entered a partnership with the Hill Museum and Manuscript Library in Minnesota to digitise his and 23 other family libraries in Timbuktu.

This is a bigger project that will eventually make available 242,000 manuscripts freely, online, complete with the scholarly apparatus and search capacity necessary for their scientific use.

Additional plans call for that project to include libraries at the town’s three main mosques and Mali’s other centre of Islamic culture, Djenné. Already more than 15,000 manuscripts are accessible for scholars. Opening these to scholars worldwide to learn about intellectual life in Africa before colonial rule promises to help rebalance the continent’s place in world history.

By Loren B Landau and Jean Pierre Misago
6 min read