The moral poverty of indifference to imperial aggression

The moral poverty of indifference to imperial aggression 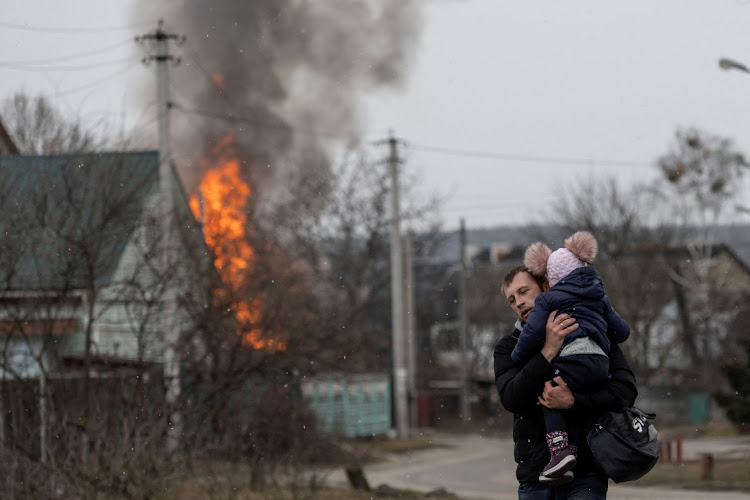 CRISIS OF CONSCIENCE Residents escape from the town of Irpin after heavy shelling as Russian troops advance towards the Ukraine capital of Kyiv on Sunday.
Image: Carlos Barria/Reuters

Democrats in SA and elsewhere should defend Ukraine against Russia’s violent imperialism and challenge the inaction of the South African government and the moral bankruptcy of its apologists.

When Putin’s Russian armies invaded Ukraine, Naledi Pandor put out a condemnatory statement. She was apparently then rebuked by President Cyril Ramaphosa. SA abstained in the UN general assembly vote. Pandor’s deputy minister explained that “SA cannot be seen to be taking sides in a conflict, as this goes against its principles”.

What, precisely, are the Ramaphosa government’s principles? Does it have any?

This indifference to imperialist aggression has been widely criticised. But, in a strange turn of events, even some initial critics have now swung behind the South African government. Why? Because, they say, of the racism experienced by the small numbers of non-Europeans at the hands of Ukrainians while trying to escape — along with millions of Ukrainians — from the Russian armies.

For some commentators — including Makhudu Sefara, the deputy editor of the Sunday Times and editor of TimesLIVE — this racism excuses South African inaction in the face of violent Russian imperialism. Sefara is rightly critical of the South African government’s penchant for fence-sitting. He agrees that “at the level of principle” (though he does not explain what principle he has in mind), the South African government should have had the courage to join in condemnation of Putin at the UN. But, he concludes, European self-interest and racism mean that this is “Europe’s war”, of no concern to “Africa”.

South Africans struggled for decades to win freedom and democracy. In this they were supported by front-line states, who were prepared to incur considerable costs in standing up to the apartheid state.

First, it is clear that non-Ukrainians of African and Asian origin have had mixed experiences in escaping the Russian invasion. Sefara’s own TimesLIVE reports, in the same issue as Sefara’s own op-ed, on the escape of three South African and one Indian medical student from Ukraine. Indeed, one student told TimesLIVE, some Ukrainians had tried to stop them — and other foreigners — from boarding the train, amid a desperate scramble for places on trains. On the train, the conductor urged Ukrainian passengers to be nice to foreigners. While denouncing incidents of racism, these students clearly have warm feelings towards many Ukrainians. And, crucially, Ukrainians did assist them to escape. Other South African students told TimesLIVE that they had not experienced any racism at all. I have no doubt that there are incidents of racism or xenophobia, but these are clearly not universal.

Second, it is hardly surprising that many Europeans identify with Ukrainians as fellow Europeans. Some express this in racist terms. Many do not. Sefara himself clearly identifies with other “Africans”. This is fitting, and welcome in the face of widespread xenophobia across SA. But shared “Africanness” does not excuse indifference to non-Africans any more than “Europeanness” excuses indifference to non-Europeans.

Third, and most importantly of all, the Russian invasion of Ukraine is not simply a war between Putin’s Russia and a European state. It is an invasion by a largely authoritarian regime — that is happy to use repression against its own population — against a broadly (if imperfectly) democratic regime. The Russian invasion is a naked exercise in imperialism. I find it astonishing that Sefara can write about this without mentioning either democracy or imperialism.

For Sefara, possible instances of racism by some Ukrainians — and perhaps by some journalists — against a small number of non-Ukrainians excuse his inability to distinguish between an authoritarian imperial regime — not unlike the apartheid state — and a democratic regime. Because Ukraine is “European”, the invasion is none of Africa’s business. In Sefara’s moral universe, instances of alleged racism outweigh imperial aggression against a democracy.

South Africans struggled for decades to win freedom and democracy. In this they were supported by front-line states, who were prepared to incur considerable costs in standing up to the apartheid state. It is sad that Sefara and commentators like him have no concern with democratic rights and freedoms elsewhere in the world. For Sefara, his identity as African is paramount. Perhaps Sefara does not believe in democracy. If he does, he clearly believes that his — and SA’s — “Africanness” counts for more than any identification with or commitment to democracy.

Democrats in SA (as elsewhere) should applaud Naledi Pandor, criticise the Ramaphosa government and condemn commentaries such as Sefara’s, not simply because it is right to oppose violent imperialism and defend democracies, wherever in the world they are, but also because it is in the interests of democracy in SA and globally. It is generally true that the more of the world is democratic, the safer democracy is everywhere. And the more of the world that is democratic, the less likely war is. If we support democracy and oppose war and imperialism, we should support Ukraine.

Jeremy Seekings is professor of political studies and sociology and acting director of the Institute for Democracy, Citizenship and Public Policy in Africa at the University of Cape Town.

The Amazon is drying out fast, and that’s very bad news for the planet