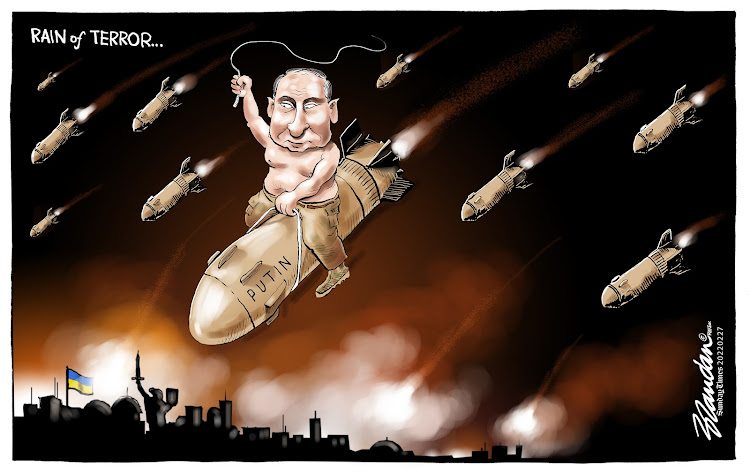 CONFUSING SA's minister of defence Thandi Modise is reported to have spent Thursday evening at the Russian embassy in Pretoria, celebrating the Defender of the Fatherland Day, while a day later minister of international relations and cooperation Naledi Pandor called Russia to withdraw from Ukraine.
Image: Brandan Raynolds

The fog of war is one thing, but how to keep a clear eye on Russia through the current miasma of denial, hypocrisy and ideological flip-floppery?

How, for example, does one stay even slightly even-keeled in a world in which Condoleezza Rice, co-author of the invasion of Iraq, sombrely and sadly agrees that invading a sovereign nation is a crime?

I suppose it did help explain how Russia got this so wrong — clearly they should have presented a vial of white powder to the UN as proof that Ukraine was hiding weapons of mass destruction — but still, it all feels terribly unhinged.

And it’s not just professional gaslighters doing their thing. Here at home, amateur enthusiasts have taken to social media in droves, explaining to each other that SA shouldn’t condemn Russia because it’s none of our business and that sanctions might hurt ordinary Russians who oppose Putin’s invasion. The last week has produced some dizzying ideological and historical revisionism, but it really has been quite something to see supporters of the ANC and EFF rehashing verbatim the arguments used by apartheid apologists to condemn sanctions.

There are also historical and ideological considerations to take into account. Had it not been for the Soviet Union, Blade Nzimande might never have been a thing.

Then again, those people look like history professors next to the sort I’ve seen all week, dredging up political analogies from 80 years ago to denounce the absence of Nato bombers over Ukraine as shameful “appeasement”.

Not content with having convinced themselves that they would have been a Churchill rather than a Chamberlain, they also seem to be under the impression that Europe of 2022 is exactly the same as Europe of 1938 and not, in fact, awash with enough nuclear warheads to make World War 2 look like a Jane Austen novel. I respect your right to publicise your stupid opinion, but if you really want Nato to roll into Ukraine blaring Ride of the Valkyries, I hope you’ve stocked up on iodine tablets and cancelled your plans for the next 1,000 years.

Still, perhaps this sort of thing is inevitable when even many journalists seem hopelessly in the dark.

Consider, for example, the local finance columnist who tweeted that he hadn’t heard of Ukraine before Donald Trump tried to blackmail it by withholding military aide. Um. What?

Further afield, proper journalists bit down on their fists as some of their colleagues described the invasion as you might if you’d been raised in a hermitically sealed golf estate as part of a social experiment to see what happens when you mix weapons-grade ignorance with twice-distilled unconscious racial bias.

The scenes in Ukraine were shocking, these pod-people agreed, because these were “prosperous middle-class people” who “seem like us”, fleeing a “civilised” country in “cars that look like ours”. (All those are real quotes.) The subtext was clear: this sort of thing might happen to the natives in places like Syria and Afghanistan, but it doesn’t happen in Europe where actual humans live.

I do hope they’re sitting down when someone explains to them what happened between 1914 and 1945, or in the Balkans during the 1990s.

For those of us who don’t live within missile range of western Ukraine, or who don’t have a vested financial interest in the region, it’s easy to take a position.

Not that betraying democracy is difficult. All you have to do is shuffle on all fours towards the throne upon which a dead-eyed trillionaire slouches, wait for him to roll over and present you with his gilded rump, and give it a gentle little kiss. That’s it. And yet Cyril Ramaphosa’s government still managed to screw it up.

To be fair, it started quite well, with minister of defence Thandi Modise apparently spending Thursday evening at the Russian embassy in Pretoria, celebrating the invasion and Defender of the Fatherland Day, before SA announced its position, which was slightly above Putin’s left shoulder-blade, giving it a deep rub with essential oils.

A day later, however, it had all fallen apart, as Naledi Pandor released an apparently official statement calling on Russia to withdraw, a move which has reportedly enraged and embarrassed Ramaphosa.

And who can blame him? Say what you like about Thabo Mbeki and Jacob Zuma, but they knew how to treat a murderous tyrant. Ramaphosa’s ANC, on the other hand, can’t even kiss the arse of a despot without choking on its tongue. It’s so far gone that it can’t even fail competently.

Admittedly, he’s in a bind. Trying to keep Russia, China, the EU and US sweet as trading partners would be hard at the best of times, but for someone without a spine and whose mouth has to be worked like a puppet, well, you can just imagine.

There are also historical and ideological considerations to take into account. Had it not been for the Soviet Union, Blade Nzimande might never have been a thing, and the ANC might never have learnt that you can be a communist while simultaneously profiting from capitalism.

Yes, the ANC has large debts to repay. If only it hadn’t pawned the moral compass years ago. I hear you can get quite a bit for one of those these days.