This is not a video game, RET brigade. We will all suffer

This is not a video game, RET brigade. We will all suffer

Putin attacked Ukraine, yet sadly the faction is cheering him on. Does it not realise there are no winners in war? 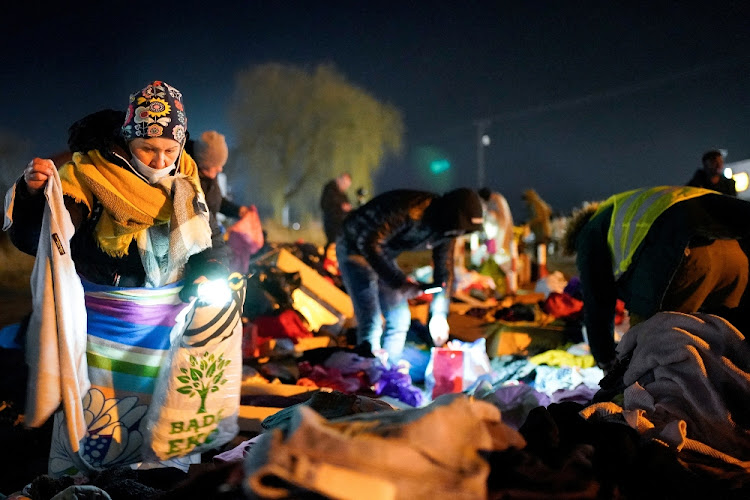 VICTIMS OF WAR A woman searches through donated clothes for useful items after she and her children fled Ukraine for Poland.
Image: Bryan Woolston/Reuters

Russia’s invasion of Ukraine is unfolding in real time, on television screens and social media across the globe.

We witnessed Russia’s leader, Vladimir Putin, humiliating colleagues and threatening dire consequences for anyone who stands against his actions. We saw the youthful Ukrainian leader, Volodymyr  Zelenskyy, stand alongside his people against the invasion, daring the mighty Russia to walk away.

The world is glued to its screens as if there will be winners and losers, and we, the audience, will then go off to make ourselves a sandwich. We are so wrong. In war, poor people always lose. They lose their lives, they lose sons and daughters, they lose homes and their meagre possessions. Russia’s invasion of Ukraine is the start of something long-lasting and horrible. It is not a video game.

This war, and Russia’s instigation of it, should be condemned in the strongest terms possible because we have seen this movie before. History has taught us again and again how badly these types of actions end.

Take, for example, the Yemeni crisis which started in 2011. It has led to the deaths of more than 377,000 people. This year alone, between 3,000 and 5,000 people have died in that conflict. But death is not the real measure of the horror that has unfolded before the world’s eyes in Yemen. More than 4-million people have been forced to flee their homes. There are 2,200 refugee sites hosting some 1.6-million displaced Yemenis.

These people are not on social media or television screens today. They are in refugee camps, fighting for their next meal, while their families have been split up and their children are in danger of being trafficked. They are victims of war.

On our continent right now, the civil war in Ethiopia has recorded 10,000 deaths. Eritrea is involved in the fighting and Sudan and Somalia have also been drawn in. Though the official death toll is 10,000, some estimates put it at 50,000 since November 2020. Those are not just numbers. That’s someone’s sibling, son or daughter.

Conflicts don’t just end. When the peace agreements are signed and the guns are put away (temporarily), the suffering does not stop.

There are many such conflicts and they are happening right here on our continent. SA has troops in Mozambique. There are terrorist insurgencies in Algeria, Burkina Faso, Cameroon, Chad, the Democratic Republic of the Congo, Niger and Nigeria.

These conflicts are not on television or social media. The victims die alone. They remind us that war is not a video game. It should not be glamourised.

Conflicts don’t just end. When the peace agreements are signed and the guns are put away (temporarily), the suffering does not stop. The war in Afghanistan may be over, but its people’s suffering is worsening. Two weeks ago Unicef’s World Food Programme said more than 23-million Afghans face acute hunger and starvation this year. More people could die as a consequence of the Afghan war than died in the war.

There is another chilling aspect to the invasion of Ukraine.

We are all familiar with stories of the US and Chinese militaries straying frighteningly close to each other in the South China Sea. After Russia’s invasion of Ukraine, will China attempt to seize control of Taiwan? If Russia can do it with Ukraine, why shouldn’t China follow the same script? In the same breath, what happens if the US attempts to attack Iran’s nuclear facilities?

With Russia’s attack on Ukraine, the genie is out the bottle. It’s a free-for-all that means any superpower with a big enough arsenal can invade a smaller country without consequence. Starkly, it is 2022 and bullies can still do as they wish.

This is why I have found the cheering on of Putin in SA disconcerting and sad. On social media the proponents of the so-called Radical Economic Transformation (RET) wing of the ANC have applauded the Russian president as a hero and painted Ukraine as an aggressor, even though evidence clearly shows Putin’s army trundling in to occupy a sovereign state. Putin chose to attack. The only way to achieve peace is for him to pull out his troops. He won’t. He wants war.

It shows that Putin has learnt nothing from the history of the world’s many previous wars and the actions of historical figures such as Adolf Hitler. Today it is the Ukraine. Tomorrow it will be some other country. The appetite for power and control cannot be appeased.

The global political picture is therefore fragile. Little wars may start in many places. Invasions and armed conflicts have consequences. This is not a video game. We are going to suffer.

Sorry, Ukraine, the UN hasn’t united nations in a while

For its own good, SA must take the regional lead against Russia