WORDS IN THE HAND: JUST CAUSE 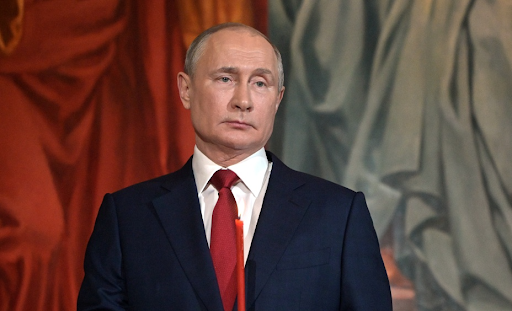 PUTIN ON A STRAIGHT FACE Russian President Vladimir Putin will struggle to prove 'just cause' for his invasion of Ukraine.
Image: REUTERS/ SPUTNIK/ SERGEY GUNEEV

When I was at primary school (during the time when dinosaurs and dodos still roamed the Earth with permed hair and leg-warmers, watching Betamax videos and snacking on crunchy glaciers) we had, as all generations do, a set of slang expressions specific to our era.

One of these was “rort!”. This was shouted whenever two boys — and they were almost always boys — got into a fight on the playground. Everyone would gather round to watch the resulting dust-up, and those on the outskirts would be tasked with shouting “chips!” if a teacher or a prefect appeared in the vicinity of the skirmish.

Prefects were known as “pricks” but I don’t think our innocent young minds comprehended the origin of the epithet. I thought it referred to the pins that attached the prefects’ badges to their blazer lapels.

Another one was “sharks and fishes”, a euphemistic term for the floating particles left in a can of shared cooldrink after the previous recipient had “backwashed” (spat in it).

The other expression frequently employed, usually in cheeky backchat to a teacher or parent, was “just coz”, a flippant abbreviation of “just because”.

“Why did you put a silkworm up your nose?”

“Why did you set off the fire alarm during assembly?”

“Why do you even bother coming to class?”

I’m spelling it “coz” because that’s how we pronounced it, but if one were to be grammatically correct it should probably be “just ’cause”.

Leave out the apostrophe denoting missing letters and you have “just cause”, a phrase describing the conditions under which a just war might be fought.

In brief, the six conditions that must be met are (to declare war): just cause; right intention; proper authority and public declaration; last resort; probability of success; and proportionality.

These go back many centuries, starting with the Roman statesman, lawyer and philosopher Marcus Tullius Cicero. In De re publica, six volumes on politics written between 54BC and 51BC, Cicero wrote: “A war is never undertaken by the ideal state, except in defence of its honour or safety.”

These ideas were taken up by others, including the sainted thinker Augustine of Hippo, who in the fourth century AD wrote: “The eager desire to injure, the cruelty of vengeance, the unappeased and unappeasable mind, the savagery of rebellion, the lust of ruling, and whatever else there is akin, these are the things which are justly censured in warfare.”

St Augustine’s words were quoted years later by a Dutch jurist called Hugo de Groot, aka Grotius. The father of international law died in August 1645, but his precepts still form the basis of many legal systems, including ours in SA.

Both Augustine and Grotius are referenced in the Charter of the United Nations, which lays down the conditions under which it is permissible for one country to declare war on another.

In brief, the six conditions that must be met are: just cause; right intention; proper authority and public declaration; last resort; probability of success; and proportionality.

Leave any box unticked and you do not have licence to beat, kill, shoot, bomb or in any other way do harm to others on behalf of your state.

There aren’t many wars that have met all the just cause principles, the most binding of which is that it should only and ever be a last resort.

Article 33 of the Charter of the United Nations states: “The parties to any dispute, the continuance of which is likely to endanger the maintenance of international peace and security, shall, first of all, seek a solution by negotiation, enquiry, mediation, conciliation, arbitration, judicial settlement, resort to regional agencies or arrangements, or other peaceful means of their own choice.”

There are plenty of people better qualified than I am to analyse whether Russia’s invasion of the Ukraine meets the principles of just cause for war, but I think it’s fair to say that any average citizen who keeps even half an eye on geopolitical news and events would seriously doubt this.

It seems, to the casual observer, that Vladimir Putin is thumbing his long nose at the UN and anyone else tasked with trying to maintain global peace and stability.

If he were asked why he is unleashing flames, terror and rockets on civilians, Putin would probably spit in his can of Fanta, curl his lip and say “just coz”.