After watching this space for so long, SA will take any shiny ...

After watching this space for so long, SA will take any shiny thing 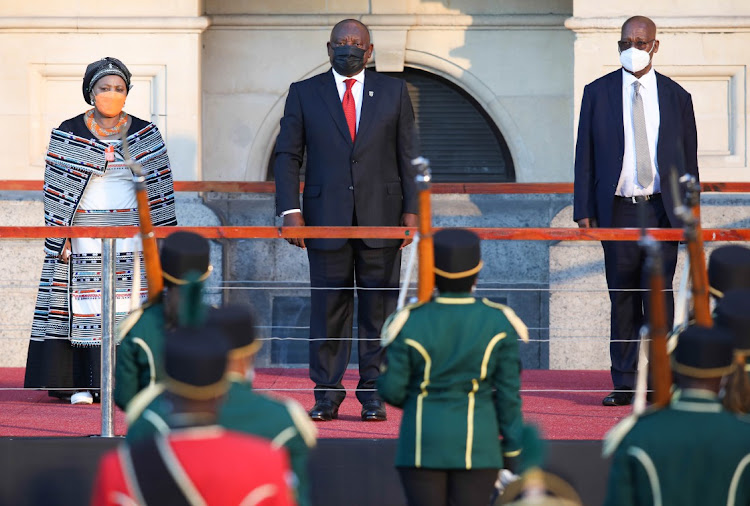 Cyril Ramaphosa, many pundits agree, said all the right things in his State of the Nation Address last week, and I suppose they’re right: when the Luminous Council of Supreme Eminences sends its Messenger down to the bunker to tell you whether you and the other hostages will be getting a new leather chewing-strap this year, anything positive sounds about right.

I’ll explain in a moment, but first, in the interests of balance, I should tell you that I believe Ramaphosa spoke honestly and from the heart at certain points in his speech.

When he compared the burning of parliament to the Covid-19 pandemic, for example, he gave us an entirely transparent look inside the mind of the ANC, where fires at important buildings are, like coronaviruses, naturally occurring events that are almost impossible to pre-empt, and whose effects can only by gazed at sorrowfully before life resumes.

Likewise, when the president insists that “a confluence of forces, many of them outside of our control, has brought us to where we are now”, I couldn’t agree more. It is totally unfair to blame the ANC for the failings of nature, such as the fact the human children need to be educated, or Bheki Cele.

I was also very excited by Ramaphosa’s announcement that his government has given itself 100 days to figure out how to grow the economy, create jobs and combat hunger. Yes, Ramaphosa has been president for exactly four years today and, yes, some cynics might ask how the next 100 days will differ from the preceding 1,460, but I see in Ramaphosa’s promise a bold statement of hope, namely, that he believes he’ll still be president in 100 days from now, and that’s the kind of optimism I look for in a leader.

At this point, however, I must pause or else become guilty of the peculiar ritual we saw last week and which continues even now, whereby the press and opposition politicians wrangle over Ramaphosa’s words as if they are even tangentially connected to reality.

I don’t want to disparage my colleagues in the press: picking through garbage is an essential part of police work. It’s also good that the president’s speech gets challenged by opposition parties: by denouncing Ramaphosa’s statement that jobs are created by business rather than by the state, Julius Malema has reminded us all of how supremely unfit he is to run a state-owned mushroom farm, let alone an entire economy.

But the absurdity of the ritual is starting to grate; this performance of respect, whereby adults pore over the minutiae of a speech read by someone who may or may not be in charge of a party which is almost certainly too rotten to save, as if those words represent anything more than the spot price of power inside the ANC.

I see in Ramaphosa’s promise a bold statement of hope, namely, that he believes he’ll still be president in 100 days from now, and that’s the kind of optimism I look for in a leader.

It’s all started to feel like some kind of Stockholm Syndrome, as we huddle like people in that bunker I mentioned earlier, lured there by a coven of failed life coaches and small-time frauds who have rebranded themselves as the Luminous Council of Supreme Eminences.

Now, every year in February, they send Cyril the Messenger down the ladder, to call us his “fellow South Africans”, as if we have anything in common, to look concerned and tell us, yes, we didn’t get a new leather chewing-strap last year, but if we’re good, and things pan out upstairs (they’re working on a sweet new deal involving the bottling of revolutionary vapours) we’re all well on the way to getting a new one this year depending on the global supply of leather.

It’s a big moment, obviously, and for a few days before and after the visit the bunker’s thought-leaders debate all the relevant issues: why we didn’t get a chewing-strap last year; whether the Messenger has the mandate to promise us a new one, or whether doing so might endanger his position; whether we should try to help him by lobbying for a second-hand strap, because, let’s be honest, the only thing worse than no new strap is for Cyril to be replaced as Messenger by Brother Mabuza or, God forbid, Duduzane the Dauphin.

Perhaps we perform the debate with such gusto because we’ve forgotten what sunlight feels like: if most people become aware of politics when they’re nine or 10, almost half of South Africans have only ever known a president who is either Jacob Zuma or Ramaphosa. But the more we debate it, the less we ask: why are these our only options? Why is this being sold to me as a life, when it so clearly is not?

I don’t blame Cyril the Messenger. I know that expecting him to open the bunker door and to purge corruption and cadre deployment from the ANC is like expecting Joe Biden to dismantle American capitalism or South African banks to refuse deposits from the beneficiaries of state capture. Perhaps just naming the devils in his speech was a form of progress.

Maybe that’s why some commentators said Ramaphosa is inching in the right direction. But almost 8-million unemployed South Africans know that there’s no more time for inches.

Last week Ramaphosa called for a “new consensus”. He should be careful what he wishes for: a new consensus is coming in 2024, formed in thousands of voting booths.

And it’s not looking good for the Luminous Council of Supreme Eminences.