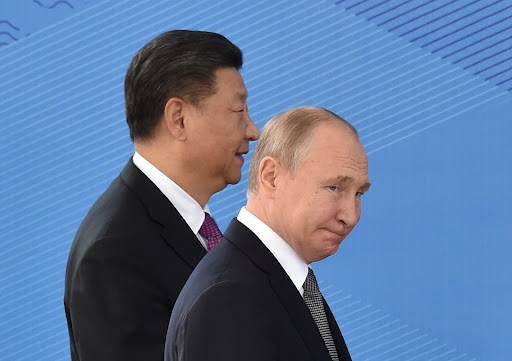 WILL HE OR WON'T HE? Vladimir Putin and Xi Jinping met on February 4 2022 for the 38th time and declared a no-limits partnership.
Image: Bloomberg

Never in living memory has the world been as unstable as it is now. These are dangerous times, especially for Ukraine. Russia has assembled about 130,000 troops at or close to the Ukrainian border, along with heavy weapons. Belarusian and Russian troops are conducting war games in Belarus.

This build-up is taking place against the backdrop of Russia’s annexation of Crimea and the de facto annexation of parts of the Donbas and Luhansk regions in eastern Ukraine in 2014. Low level conflict has continued along the front ever since, leaving about 14,000 dead.

Will Russia invade the sovereign nation of Ukraine again? Only Russia’s president, Vladimir Putin, knows. However, one thing is certain. There won’t be an invasion during the Beijing Winter Olympics. Authoritarian regimes take those kinds of events very seriously and Putin won’t muck it up for his key ally.

One cause for hope is that the US and EU countries are holding talks with Russia, albeit with Ukraine itself often not in the room. No matter how difficult or inconclusive, talking is better than bombing. It’s also worth remembering that Putin amassed 100,000 troops on the border in March and April 2021 and then sent them back to barracks. Still, general panic and Putin’s view of history could push the situation into war.

Near-hysterical warnings of an invasion are coming out of Western capitals. The US and the UK have pulled out non-essential staff from their embassies in Kiev. President Joe Biden, whose remarks sometimes give the impression of senility, said last week that Americans should leave Ukraine. Basically, he has flipped into Cold War mode.

US politicians are not only threatening “the mother of all sanctions” but are debating applying sanctions before any invasion, which would reinforce Russia’s paranoia about the West’s hostile intentions.

The US and its Nato allies have and are moving troops into Eastern European countries. Since no one will militarily defend Ukraine and Russia will not invade Lithuania or any other member of the EU, this only needlessly heightens tensions.

The potential belligerents have a different view. One could be reasonably forgiven for not believing Russian denials of invasion, but Ukraine’s assessment is important. Volodymyr Zelensky, the president of Ukraine, told the West on January 28: “There are signals even from respected leaders of states. They just say that tomorrow there will be war. This is panic - how much does it cost for our state?”

Because of this hype, Ukraine is struggling to raise international finance and is depleting its foreign reserves. Three days before Zelensky’s comments, Ukraine’s defence minister Oleksiy Reznikov also downplayed the threat of invasion and said: “Panic and fear is the most clickable.”

With Biden’s approval ratings only slightly higher than Trump’s in 2018, rebooting the fight against the Soviet Union in disguise certainly helps to distract. British Prime Minister Boris Johnson is suddenly talking tough on Russia. Which has nothing to do with him having drinks at Number 10 parties during lockdown and the subsequent calls for his resignation.

Promising huge economic retaliation and mobilising troops make it harder for Putin to walk away. The arch-enemies of Russia would have “forced” him to back down. But he’s not a man who backs down easily. During the Second Chechen War (1999-2009), he surrounded the Chechen capital of Grozny with tanks and artillery and flattened it.

Putin published an essay, “On the Historical Unity of Russians and Ukrainians”, in July 2021. Using what is best described as revisionist history, Putin charts foreign oppression of Ukrainian and Russian people, whom he sees as one people. He starts with the Polish–Lithuanian Commonwealth (1569-1795), which incorporated the western part of Ukraine and was, but not according to Putin, noted for religious tolerance and a form of democracy.

He ends with what he sees as the West’s current intentions, stating: “Ukraine was dragged into a dangerous geopolitical game aimed at turning Ukraine into a barrier between Europe and Russia, a springboard against Russia.”

The essay gives the impression that for Putin the past is the present. History is not dates but a living entity justifying present actions. China’s President Xi Jinping has a similar attachment to history. Speaking about Taiwan last year, he said: “The historical task of the complete reunification of the motherland must be fulfilled and will definitely be fulfilled.”

On February 4 2022, Putin and Xi met for the 38th time and declared a no-limits partnership. China stated its opposition to Ukraine becoming a member of Nato, which is Putin’s main concern, and Russia backed China’s stance on Taiwan.

Ukraine and Taiwan — that’s the ultimate nightmare of our destabilised world. If Xi and Putin decide to invade at the same time, “reclaim” lands, then we have a global war. For unlike poor Ukraine, the US and its allies will probably fight for Taiwan.

Tristen Taylor is a freelance journalist and photographer. He was working in Ukraine last year.

RIGHT OF REPLY | Try this for meaning, Prof Jansen