Party needs clear policies and a vision because if it’s only in the game to topple the ANC, it will topple itself 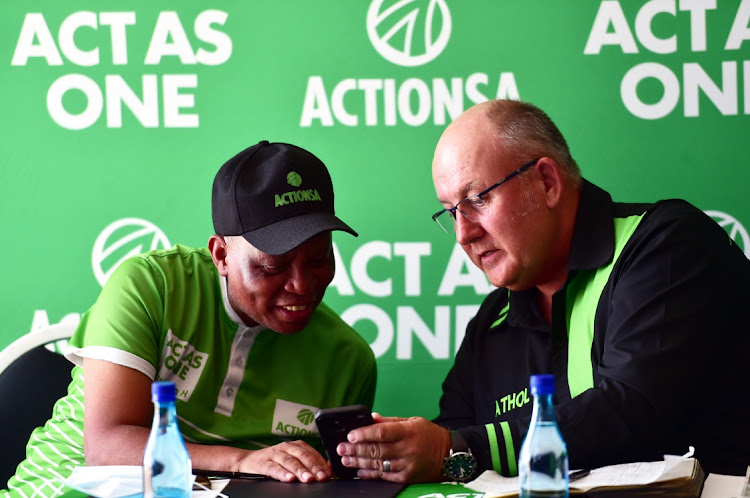 OLD ALLIES Herman Mashaba and Athol Trollip ahead of an ActionSA media conference in Gqeberha on Wednesday, where it was announced that Trollip has joined the party.
Image: Eugene Coetzee

The party was excited about the move and playing social media games with members of the public, wanting them to guess which big name it would next unveil. But what difference, if any, will Trollip’s decision to join Mashaba’s political outfit make to its trajectory?

Mashaba dreams of toppling the ANC in 2024. He has a better chance of selling more Black Like Me products than getting rid of the ruling party that easily. But he can increase his chances of doing so if he can gain traction outside Gauteng, where his personal and political brands are most well-known.

This is where Trollip’s ActionSA membership becomes important. Mashaba needs leaders in provinces who are well-known to voters in those areas and who can leverage their name- and face-recognition to try to persuade disillusioned voters to support ActionSA. And even more difficult than that task, to persuade ANC voters to ditch their beloved party for a new one.

Mashaba is not a household name countrywide.

In a province such as the Eastern Cape, where the ANC remains popular despite an appalling governance record, someone such as Trollip can crisscross the region to garner support for ActionSA. He is from there, lives there, has been mayor of Nelson Mandela Bay and has partaken in provincial politics since the dawn of democracy. He is deeply familiar with the political faultlines of the Eastern Cape, including complex coalition politics, and is fluent in the linguistic and cultural grammar of people who live in all parts of the province. He will be an asset to ActionSA as a regional leader.

Trollip also has enormous national political experience that will allow Mashaba, a relative novice by comparison, to draw on his institutional knowledge and cumulative leadership experiences.

After the 2019 poor showing of the DA, for example, I interviewed Trollip and pressure-tested his willingness to self-examine. His then colleagues, Helen Zille and John Steenhuisen, refused to accept the DA had shamefully underperformed by running an ineffective campaign. They basically blamed voters for not supporting them and, with the help of a not-so-independent review panel, blamed former leader Mmusi Maimane for lacking a clear vision with which to stop the tide of “Ramaphoria”, the excitement many associated with Cyril Ramaphosa’s election as ANC president at Nasrec in Johannesburg.

Trollip, to his credit, refused to repeat that disingenuous analysis. He told me the party had simply not succeeded in playing well enough in the centre of SA politics and so did not manage to persuade voters to join it there. He went even further in his self-diagnosis by arguing that too many of his colleagues in the leadership of the DA were ideological purists rather than pragmatists who understand the importance of making the party a comfortable place for people of diverse backgrounds, including former ANC politicians and supporters who might then consider joining the party.

I was impressed that he refused to externalise the poor election results of the DA or deny the party must take responsibility.

Mashaba is far more hard-headed than Trollip, who is no walkover and can be stubborn. But he has greater strategic sense than Mashaba and is not afraid to make reasonable concessions, and to engage honestly, with a real possibility of self-examining a position that is untenable. Mashaba would do well to allow himself to be complemented by a fellow leader with different strengths. I cannot see that working out well in reality, however, because there may not be enough space in ActionSA for all of these muscular identities. It would take uncharacteristic humility on Mashaba’s part to let go of his dominant voice and omnipresent persona to give leadership way to others, such as former Midvaal mayor Bongani Baloyi and Trollip.

Which brings me to their first major challenge.

ActionSA does not yet have an identity. It does not have clear policies. It does not have a vision for SA. Its point is to topple the ANC. That is not good enough. Every opposition party would like to see the back of the ruling party. That desire alone will not capture the hearts and minds of South Africans, let alone our votes. That is why the DA cannot even get a 30% share of the national vote and why COPE has infamously imploded after much excitement when it was launched. Even the EFF is now politically sluggish because though SA voters might be fed up with the ANC, we are not easily persuaded that an “anything but the ANC” premise is sufficient to justify voting for a new party.

A new party must have a clear and cogent vision; feasible and desirable policy proposals in response to major challenges such as low growth, high unemployment and deep inequality; and all of this, in turn, must be informed by a coherent party identity, even if it is one silently informing the party’s vision and policy proposals.

The implication for ActionSA is that it is not good enough to tease voters on social media about famous people joining its ranks. Cynical voters will soon see ActionSA as a collection of mostly former DA politicians and perhaps even brand them as disgruntled former politicians who did not get their way in their previous political homes. Of course, I understand the growth spurt is desirable for the party and, as argued above, attracting well-known folks with deep and impressive track records in different provinces matters if the party wants to do well in 2024.

The focus must quickly shift, however, to a proper democratic leadership elections conference to avoid an exodus of founding members and initial community-based activists and supporters who see these famous people being parachuted into the top structures. ActionSA must imminently create structures and processes that can animate internal democracy. If it doesn’t, infighting will get worse and the party will have a credibility problem. That must be nipped in the bud.

As important is a policy conference. The party has to allow for a contestation of ideas about what its identity is and what its policy positions are on the thorniest questions we are grappling with as a country. This will not be easy. Baloyi, for example, enjoying his post-DA freedom, is now speaking freely about the lived experiences of black people in a society in which anti-black racism is still a reality. Trollip insisted when he became mayor of Nelson Mandela Bay that the success of the DA then in local government elections in the Eastern Cape was proof race does not matter when it comes to who people vote for. When he resigned from the party he insisted his decision was hard, not least because it is not easy for someone with his “skin colour” to look for a new job in SA. Trollip is colour-blind. Mashaba is simply confused about his views on race. Baloyi is a bit more “woke”. And who knows what others think.

Similarly, it is anyone’s guess what Mashaba thinks about social security, given his many years of right-wing capitalist sloganeering when he was still chairperson of the Free Market Foundation. Will ActionSA be economically conservative but liberal on some social issues? What will it say about the land question? How about the basic income grant?

For all of Mashaba’s energetic swipes at the ANC that many Johannesburg residents enjoyed, we will be using different criteria to judge a national campaign by ActionSA. And what the party has to say about the biggest issues of the day in the lead-up to 2024 will be most interesting to anticipate.

Promises, promises: a look back at Cyril’s Sonas ahead of 2022 address

SA needs an emergency cabinet made up of its best minds