Jezebel and red dragons allowing, the new chief justice should ...

Jezebel and red dragons allowing, the new chief justice should do just fine

Mogoeng, who barely inhabited this world, did a competent job of it, so it should be a doddle for his successor 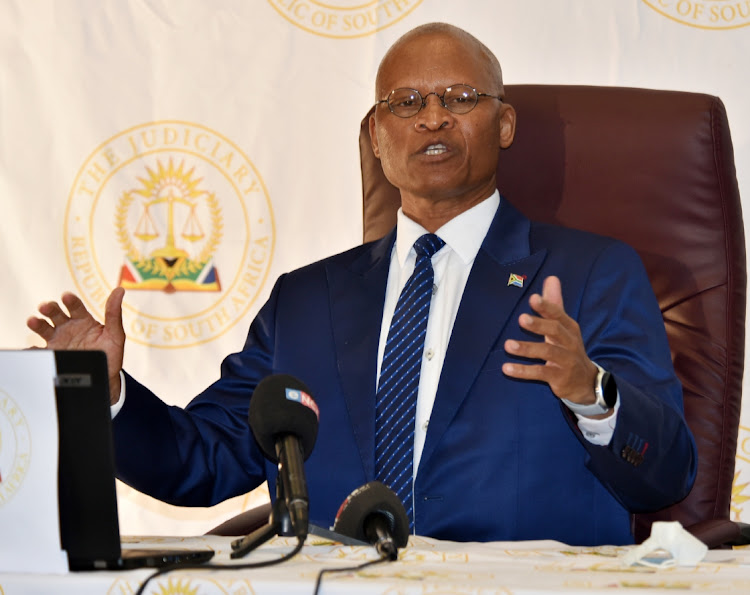 GOD FEARING The former chief Justice Mogoeng Mogoeng had some interesting ideas about religion and the state.
Image: Freddy Mavunda

As the Judicial Service Commission’s interviewing process ended in anger and astonishment, many observers asked why Julius Malema, the man who gave us Jacob Zuma and Busisiwe Mkhwebane, was helping to choose the next chief justice of the land.

I, however, was less outraged by his presence on the JSC. Malema has met far more judges than most people, or at least appeared before more than most people, and I also believe that we all have a right to know our accuser, even if it’s a few years before the accusation is formally lodged.

The bigger question for me is why there are any politicians at all on the JSC.

Granted, the whole thing seems to be the legal equivalent of American Idol, where famous people pretend to listen to auditions and then, once the cameras stop rolling, hand over to the real singing coaches and producers and accountants who make it all happen. But even if it’s mostly just for show, it still feels an awful lot as if bookies are getting a seat at the selectors’ table.

To be fair, it should be noted that the JSC does include some highly skilled lawyers, and also Dali Mpofu.

Mogoeng barely inhabited this world and yet, in retrospect, it is now clear that he carried out the duties of his office with extraordinary restraint.

On Monday, the people’s advocate was back to doing what he does best, ordering News24 to remove an opinion piece by Adriaan Basson which described him as a “thuggish legal nincompoop and scoundrel”. If the offending op-ed wasn’t gone by noon, Mpofu warned, he’d have to enlist the help of lawyers who sometimes win cases.

I don’t need to tell you that noon and came and went, though, in an exquisite bit of trolling, News24 did briefly remove one thing: it’s paywall.

Personally, I’m not sure it’s fair to describe Mpofu is a thuggish legal nincompoop and scoundrel, mainly because those are terms of moral judgment, and someone who represents the law even as he acts as council for a party determined to undermine and ultimately abolish it, is clearly operating in a post-moral world and therefore can’t be judged in moral terms. In the end, all one can really say about Mpofu is that he works for Julius Malema. Which, I suppose, says it all.

I certainly can’t comment on the merits of the various candidates. People whose opinion I trust tell me that judge Mandisa Maya would be excellent. I also take seriously the claim by the EFF that some of the criticism directed at her is because she’s a woman: when it comes to firing up misogyny for political gain, the EFF should be considered an expert witness.

Beyond these relatively shallow takes, however, I don’t have a very strong opinion; not because this isn’t important, but because I feel that whomever gets the job will be more or less fine. And the reason I feel this way is because of the reassuring example set by the former chief justice, the venerable Mogoeng Mogoeng.

This may surprise you. We all remember how, after many years of trying to the blur the line between church and state, Mogoeng threw caution and secularism to the wind, going full locusts-and-wild-honey as he warned us about Covid vaccines manufactured by Satan and explained that he didn’t want to criticise Israel because he feared that God would punish him by giving him a taste of some of that Old Testament love that rained down on the Egyptians and Lot’s wife.

In November last year, he cranked it up to 11, claiming that he had personally cured a couple of HIV-Aids, before explaining to another congregation that (and I’m barely paraphrasing here) Jezebel, “the mistress of plotting and conspiracy”, and the Leviathan, which I assume is her pet fish, are out to destroy us, assisted somehow by a “red great dragon”; that God told him to go to Mthatha via Graaff-Reinet because he “had to destroy any satanic altar there”; and finally, on a more cheerful note, that he had heard a prophecy in 2008 that the “angel of judgment” was already in SA and that our economy would be “very strong”. (I’m not sure what the angel of judgment has been doing for the last 14 years, but perhaps these things take time.)

This, dear reader, is what was living inside the head of our perfectly serviceable chief justice. While we worried about the separation of church and state, he lived in a fever dream in which there was no state, just angels and magic and Jezebel.

And this is why I’m so reassured by the new crop of candidates.

Mogoeng barely inhabited this world, and yet, in retrospect, it is now clear that he carried out the duties of his office with extraordinary restraint.

While his mind resounded with the roaring of red dragons, he oversaw a legal system which tried cases on evidence, rather than on which lawyer could turn a staff into a snake.

Parents won custody of children based on the law, not on how they reacted when someone threatened to chop the child in half.

Offenders were given jail time or fines, not sold into slavery or tortured to death, as demanded by Mogoeng’s God in some of his grumpier moods.

So be at peace. Because if Mogoeng could defend and uphold the law, despite believing that it wasn’t paramount, then his replacement will do just fine.

Thrown to the wolves: how intelligence, police failed SA during July riots