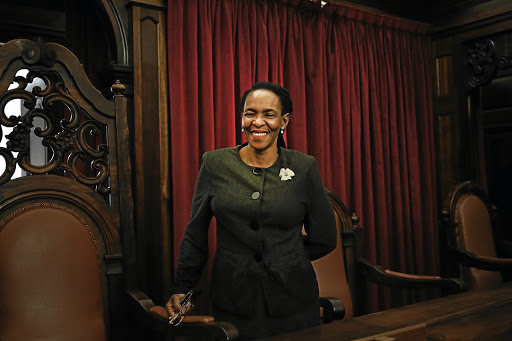 THE FIRST? Mandisa Maya is the JSC's recommended candidate for the chief justice. Her appointment would make her the first woman to hold the position.
Image: Alon Skuy

Five years ago I travelled to Mangaung to interview president of the Supreme Court of Appeal (SCA) justice Mandisa Maya. My colleague Ziniko Mhlaba (the producer of my television show at the time) and I were silent when we drove back to Johannesburg. We could not speak. We were too wowed by the judge’s wit, wisdom, humanity and brilliance. Her deep thinking about the role of the judiciary in a polarised society such as ours, her commitment to preserving the dignity of the judiciary in trying times, stood out.

It was a deeply inspiring interview personally too. She had battered down doors and broken through glass ceilings to get to where she was. And she was not finished. She wanted to do more to transform the judiciary and make it more welcoming of women. Her life story was the stuff motivational speakers dream of.

Since then Zini and I have joked that she was closing in on the chief justice role. Last week was her chance to again put her considerable intellectual gifts on display and as usual she was great when she appeared before the Judicial Service Commission (JSC) as one of four candidates for the top job.

On Saturday the JSC recommended President Cyril Ramaphosa appoint Maya as the next chief justice. It would be historic: she would be the first woman to lead the institution.

Maya’s possible appointment should be cause for great jubilation everywhere from Tsolo to Pampierstad. Yet what we saw unfold at the JSC hearings last week was possibly the most disgusting, most damaging, most insulting, most cowardly dereliction of duty yet displayed by the body and our politicians. The recommendation of Maya, a capable and formidable jurist, has now been poisoned by callow politicians who turned the process into a circus.

On Thursday we saw Dunstan Mlambo face a coordinated smear campaign by JSC commissioners Julius Malema and Dali Mpofu, who confronted him with rumours and innuendo that he was guilty of sexual harassment of potential judges. No evidence was proffered. No victims. No facts.

On Thursday we saw a candidate, judge president of the Gauteng division of the high court Dunstan Mlambo, face a coordinated smear campaign by JSC commissioners Julius Malema and Dali Mpofu, who confronted him with rumours and innuendo that he was guilty of sexual harassment of potential judges. No evidence was proffered. No victims. No facts. There was no one who alleged sexual harassment against the man. The entire thing was vile; it was criminal; it was the worst of our politics. The JSC was hijacked to end a man’s 34-year career because he and his division had in the past delivered judgments that tackled those who tried to capture our state and loot our country.

The acting chief justice, the supremely calm and dignified judge Raymond Zondo, was subjected to the most wicked and odious barrage of insults from Malema and Mpofu. Once again it was clear that anyone who had stood up against state capture was a target for defamation, innuendo and elimination. That Zondo called a press conference to respond to minister Lindiwe Sisulu attack on the judiciary was used to try to paint him as being partisan. You heard that right: members of the JSC were standing up for Sisulu, a person who denounced the constitution and the judges appointed by the very same JSC.

After that the entire thing became a joke. By the end of the 12-hour session on Friday it was clear only the coolness, humanity and dignity of Zondo was what was left of the legitimacy of the process. The chairperson of the proceedings failed repeatedly during the week by allowing bullying, insults, disinformation, temper tantrums and populist grandstanding to dominate. It turned the process into a sham.

There was a lot that left a bitter taste at the JSC. For one, the formidable Maya was insulted with questions as nonsensical as whether SA was ready for a woman to become chief justice. The question to Maya reveals a deep-seated sexism. Why should women have to justify their existence and nurse the feelings of sexist men?

So whatever happens with the final choice that has to be made by Ramaphosa, we are now left with a moral and ethical crisis. Are we going to sit quietly and let things slide after seeing the horrific lynching of Zondo and Mlambo? Are we happy to have Maya ascend to the top after a disgraceful process such as what we have witnessed? Is she happy to ascend under such a cloud?

Our people will trust our institutions (such as the JSC) if their processes are seen as fair, rigorous and free of malicious intention and action. Nothing about the past week’s hearings comes close to ticking any of those boxes.

The process was an insult to four extremely capable jurists who, in good faith, came to be interviewed. The outcome is now a poisoned chalice for the recommended candidate. The JSC as an institution is deeply diminished. Its members have spat on the idea of justice itself.

Maya is fit and proper to be chief justice. JSC is neither fit nor proper