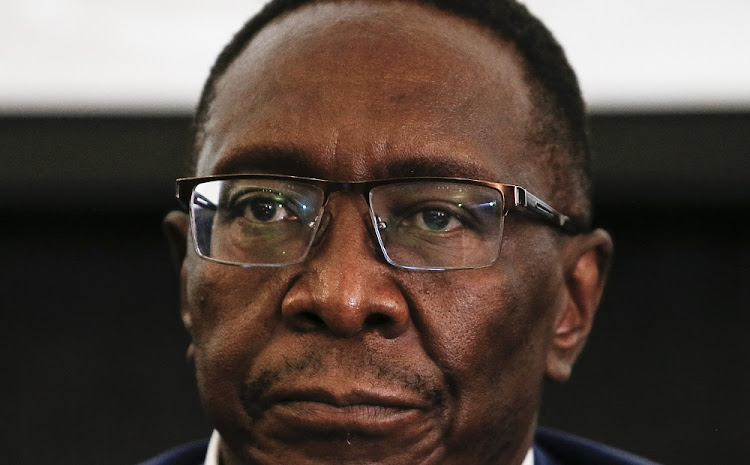 He may have been fighting a silent but virulent battle internally as he was questioned by people he considered intellectually junior to him. To borrow from Plato: “One of the penalties for refusing to participate in politics is that you end up being governed by your inferiors.”

Quizzed on his political activism, Mlambo told commissioners he did not participate in the fight against apartheid. “When the police came to campus, I was the first to run,” he said with a mirthless smile.

It was tense and uncomfortable even before “rumours” of sexual harassment surfaced. In the main, Mlambo painted an image of his young self as someone who chose to stay away from politics and its attendant troubles. He seemed a young man who listened to his parents’ counsel: “Focus on your studies and stay out of trouble.” After all, he was just a young man and apartheid seemed larger than life itself. Not so for others, of course.

This week, the politics he avoided decades ago caught up with him, as it were. He was made to look like a coward who looked away when his peers were throwing stones. And now that the trouble is over, he’s at the whim of political players and pretenders populating the JSC.

JSC commissioner Griffiths Madonsela SC, almost as an afterthought, explained that it did not follow that focusing on questions relating to public protector Busisiwe Madonsela’s objections against Mlambo necessarily meant he believed them. But what this did was to help deconstruct Mlambo’s path to the judiciary’s highest office.

Mlambo is an important cog in the functioning of the high court in Gauteng, the country’s economic and political hub. His division is criticised for being pro Ramaphosa, even though this is more perception than truth. And so when JSC members throw shade at him as someone without a struggle record, someone who hasn’t delivered sufficient judgments affirming socioeconomic rights, they do this so that when he’s appointed, Ramaphosa can be accused of elevating reactionaries because he too is one.

Everything is linked to 2024. A combination of Ramaphosa and Mlambo as chief justice is something the political players of the JSC would want to avoid. This combination is already problematic in Mlambo’s division.

This week, the politics he avoided decades ago caught up with him, as it were. He was made to look like a coward who looked away when his peers were throwing stones.

Many have complained this week about myriad agendas being pushed at the commission, but I do find the politics behind the questions fascinating. More so for what they portend for President Cyril Ramaphosa.

The effect of the political circus affecting the chief justice selection process is that Ramaphosa’s selection is effectively reduced. The sexual harassment rumours against Mlambo theoretically must not affect his chances but, in reality, they do — even if, for now, they’re just rumours. Those who raised the rumours aren’t unaware of their possible effect. Ramaphosa, in any case, would not want to send confusing signals about sexual harassment.

Acting chief justice Raymond Zondo, another candidate, comes with political baggage. Appointing him might send the wrong political message that he is being rewarded for handling, so to put it, Ramaphosa’s challengers in the ANC, also known as the radical Economic Transformation faction. This faction, as is public record, is populated by people variously implicated in state capture. Zondo has already submitted to Ramaphosa two parts of his report, with the third coming at the end of the month. If Ramaphosa appoints Zondo after the latter has told us how corrupt Ramaphosa’s challengers are, it sullies the process. Yes, the constitution enjoins Zondo to do his job without fear or favour. But, in politics, optics are everything. The politics of appointing Zondo might become unwelcome noise in the year Ramaphosa hopes to be re-elected ANC president. This means Mlambo and Zondo come with the baggage that is politically inconvenient for Ramaphosa this year.

This, if we restrict ourselves to the politics undergirding the appointment, literally leaves Supreme Court of Appeal judge president Mandisa Maya and Constitutional Court justice Mbuyiseli Madlanga. These are safe bets, even though Maya was denied critical questions to enable her brilliance to come through.

Even though she protests against her consideration as a woman, politically that’s an opportunity for Ramaphosa to make a historical statement — being the first president of the country to appoint a woman as chief justice.

So, in the end, while Ramaphosa and the JSC will pretend to be considering much more than the politics (jurisprudence, leadership, management and so forth), political considerations will loom large over all the candidates’ chances. I do believe Maya stands a better chance, but the appointing authority ought to stress that whoever is appointed got the nod because they are a fit and not because it’s convenient.

For Mlambo, he may have been the first to run when police arrived at his varsity instead of raising his clenched fist, but he, and the rest of us, can never just leave politics to politicians because it will, after all, still affect all of us, one way or another.