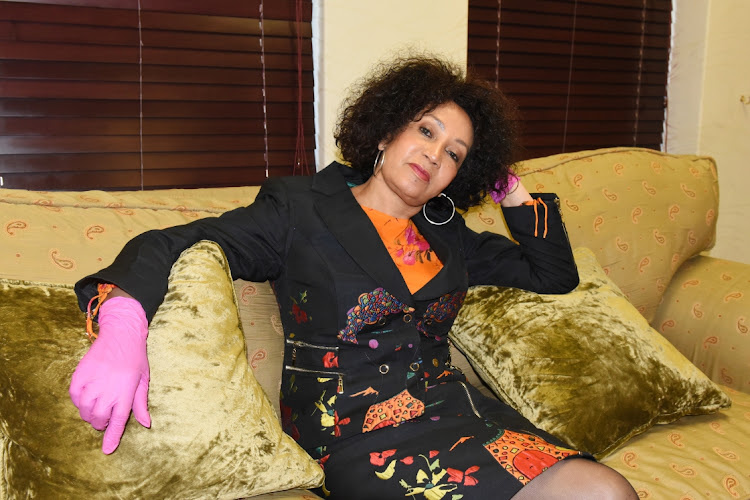 TRUE COLOURS Lindiwe Sisulu is running for president and she's got just the right people behind her -- Mzwanele Manyi, who wanted coloured people removed from the Western Cape because there were too many of them, and Duduzile Zuma-Sambudla, most famous for celebrating the July riots and the fire in parliament.
Image: Freddy Mavunda

As Lindiwe Sisulu launches her second presidential bid in all its shabby glory, carried on the shoulders of Twitter revolutionaries and apologists for insurrection, I think we should all seek solace in the benevolent countenance of the Zimbabwean holy man, Passion Java.

The most reverend Java, you will recall, recently spent a smidge more than R1m at a Pretoria nightclub, apparently as part of a sales pitch: for a fee, Java told the media that rushed in for a soundbyte, he was willing to teach people the secret to getting rich.

Which was odd because his method is available free on Wikipedia: you cook up a childhood in which your mother insists you were prophesying things with supernatural accuracy (except, oddly, lottery numbers); start a church; pass around a hat; claim to have performed a miracle; pass around lots of hats; buy a TV channel; pass around your EFT details. End of mystery.

Indeed, one’s opinion of them aside, you have to admit that the work of people like Passion Java and Shepherd Bushiri is often remarkably transparent. Attendance at their performances is voluntary. So is belief. And those who have decided to believe get what they pay for: an encouraging young man in a shiny suit, telling them that fairies are real — he knows because they visited him and gave him this shiny suit — and that the fairies might visit them too if they give him a hefty donation.

It’s all out in the open, plain as daylight robbery. I’m not even sure anyone is guilty of hypocrisy. I mean, if your gospel is explicitly dedicated to the acquisition of personal wealth, aren’t you literally practising what you’re preaching? Why have we decided the man telling stories is the predator, but the people choosing to believe them, who are working much harder than the prophet to suppress their critical faculties, are helpless victims?

Which brings me back to Sisulu and an admission: I’m just not feeling the outrage.

Of course, there’s the obviously nauseating spectacle of constitutional delinquents who tolerated or actively aided the looting of hundreds of billions talking about the best way to serve the poor. I’ve often pointed out the parallels between the ANC and the ultra-corrupt Christian church of the Middle Ages, and this week’s “debate” about the constitution and direction of SA is straight out of Avignon in the 1300s: two factions of bejewelled cardinals bowing their heads to ask God’s guidance in emulating Christ’s humility and charity, all keeping one eye open in case someone tries to slip something into the sacramental wine.

Outrage, however, requires shock, or at least some preconceived notion of reality being upended, and that is simply absent here. Like Passion Java, Sisulu and her backers have always shown us precisely who they are.

On Thursday, when Sisulu’s biggest fan, Mzwanele Manyi, tweeted that “Constitutional Democracy is a wrong model for South Africa”, some pundits reacted as if an august and respected constitutionalist had lost his mind and defected to Team Burn It All Down.

Manyi was just being Manyi; the same man who wanted to remove coloured people from the Western Cape, wondered if constitutional democracy should be scrapped in favour of  'majoritarianism', a system whereby the masses decide their own fate, as long as it’s in line with what the queen and her Manyi-shaped footstool have already decreed.

But Manyi was just being Manyi; the same man who wanted to remove coloured people from the Western Cape because there were too many of them and who, in 2017, wondered if constitutional democracy should be scrapped in favour of something called “majoritarianism”, which, I assume, is a system whereby the masses decide their own fate, as long as it’s in line with what the queen and her Manyi-shaped footstool have already decreed.

Even if Sisulu wasn’t setting herself up as the candidate of Radical Economic Obliteration and being publicly backed by people like Duduzile Zuma-Sambudla (most famous for celebrating the July insurrection and the parliament fire), we’d still know her attacks on the judiciary were bullshit because we know where she’s been for the past 30 years: ensconced like a little polyp deep inside the fourth stomach of the ANC. There are no more secrets between our overlords and us. We all know who they are and what they want, and if we don’t, then I’m afraid that’s on us, not them.

No, none of this is a secret any more, which is why having it rubbed in our faces — or showered over us like champagne sprayed by Passion Java — feels more inevitable than outrageous.

After all, in a world in which Java and Bushiri can become multimillionaires; in which Fikile Mbalula is not just employed, but is a cabinet minister; why wouldn’t Sisulu lunge for that gleaming, greasy brass ring?

What does she have to lose? Her job? Piffle. She doesn’t need to work another day in her life. Her dignity? That’s long gone, sold the day she — and Cyril Ramaphosa, and Mbalula, and Naledi Pandor, and many others still in power — voted against Jacob Zuma paying back the Nkandla loot, collectively telling the citizens of SA where they could stick their prudish middle-class notions of justice and fair play.

No, Sisulu tried to be president in 2017 and she’s trying again now, sending round the hats as she preaches of economic miracles and political wonders. And when the punters roll in and beg to be lied to and have RET Doom sprayed in their faces, can we really blame her?