Moe Shaik’s book won’t win any prizes, but it’s a gripping story of how Jacob Zuma perverted the secret services 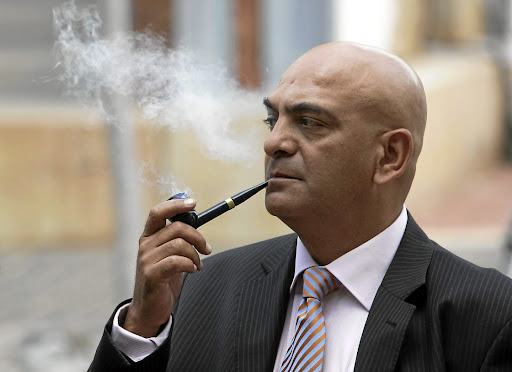 SMOKING Moe Shaik is today a dapper figure, but his autobiography tells of a less flamboyant past in the world of espionage.
Image: Halden Krog

The prose is terrible, the organisation weak and the editing irresponsible. Yet I liked this book with the strange title, The ANC Spy Bible — no doubt chosen for marketing effect and little else; there is no Bible.

It is the story of Durban-based Moe Shaik, a university lecturer and optometrist whose life is drawn into and eventually snuffed out by ANC intelligence (if ever there was an oxymoron).

As a young professor at the same Durban university, I recall the whispered admiration with which my fellow academics spoke of Moe, the ANC operative, and also his brothers long before Schabir took over the media headlines for the family. Schabir went in and out of prison for his corrupt relationship with Jacob Zuma in relation to the arms deal scandal.

When the University of Durban Westville (UDW) threaten to collapse under the force of anarchists posing as leftists, then-president Nelson Mandela inaugurated the first commission of inquiry into a higher education institution in the early years of our democracy.

“Moe is on campus,” I heard in the staff tearoom. No doubt to get to the bottom of things for his political masters, I thought.

That is why I bought the book. I know half of the characters in it from the two universities, UDW and the University of Natal, which today are merged as the University of KwaZulu-Natal. The book also reveals how little I knew of some of them, one of whom detonated practice bombs along a riverbed while teaching education on a nearby campus. I enjoyed the sketches of struggle heroes like Billy Nair, beyond what is known about his sojourn on Robben Island, and Simphiwe Nyanda, who had that rare trait among black brothers and sisters, a genuine belief in and commitment to our nonracial identities.

Somehow, somewhere, sometime, we have to account for the trauma of apartheid that lingers on in the bodies and minds of those who experienced horrific torture by the regime.

Mostly, I appreciated the painful writing through which the author reveals his inner life, the emotional and psychological and physical scars of the tortured spy. Comrades who suffered greatly seldom open up about what happened to them on the inside beyond heroic accounts of what they accomplished on the outside. I agree that this was a limitation of the TRC with its focus only on egregious acts of violence.

Somehow, somewhere, sometime, we have to account for the trauma of apartheid that lingers on in the bodies and minds of those who experienced horrific torture by the regime and, by the way, continues in the lives of the second generation, the children of those who were taken to breaking point by their official tormentors.

In opening up, there is no bombast and even the conviction of Schabir is treated with the kind of sensitivity that hovers between the acknowledgment of a crime and the solidarity with a brother. The Cuomo brothers in New York could take a leaf from Moe’s story. The journalist Chris Cuomo was fired by CNN for working to defend his brother, the former governor of New York, Andrew Cuomo, who was accused of sexual harassment and assault by several women.

Perhaps the most valuable insight from the book is the detail about the ways in which agents on both sides of the struggle routinely sold out their masters.

An apartheid security officer called “Nightingale” became an invaluable source of intelligence information for the ANCby bringing Moe top-level secret files that revealed how compromised the liberation movement was throughout its exiled years; sellouts went all the way up to the national executive committee of the ANC. There was an intimate and yet complex bond that formed between Nightingale and Moe that saved many lives but in the post-apartheid years left both men marginalised.

For students of politics with an interest in how democratic institutions became hollowed out in the Zuma years, the book reveals how the intelligence services became little more than political instruments in the hands of the corrupt for waging factional wars within the ANC, doing great damage to the constitution and the country. The damage to our intelligence infrastructure remains to this day and explains unstoppable, cataclysmic events such as the July 2021 riots that followed the incarceration of the former president.

It’s a crap job, but it has to be done. Now more than ever