The sooner things sour for anti-vaxxers the better

The sooner things sour for anti-vaxxers the better

These people, with their warped logic, are risking lives. It’s time the state put their pleasure and pockets in peril 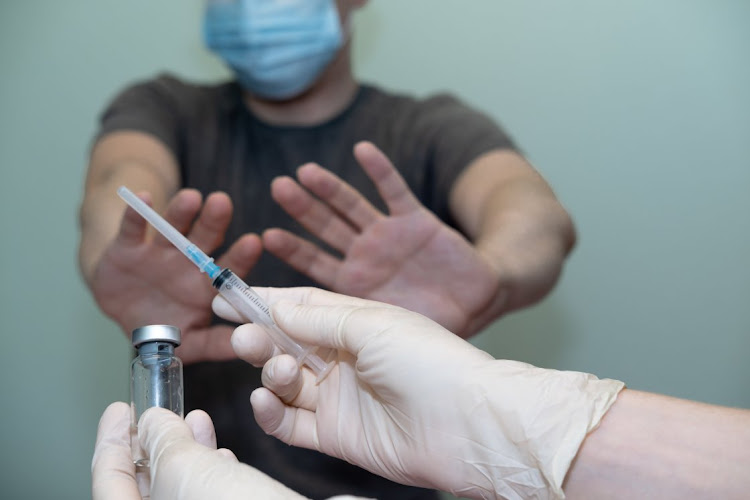 FACE VAX Anti-vaxxers shouldn't seek hospital treatment for illnesses or injuries because they generally mistrust science. They must stick with herbal remedies or consult a sangoma.
Image: Anna Rozhkova

The problem with consultative democracy is that we are required to over-consult ignoramuses on interventions that will save their own lives. I was listening to the ACDP’s Kenneth Meshoe on SAfm’s morning show shouting: “We don’t know what’s in the vaccines” as his sole reasoning for opposing them and possible mandates. Really, Rev? You are going to question science armed with an unscientific Bible and illogical reasoning?

I read a story online that said 87% of patients admitted to Tshwane hospitals with Covid-19 are unvaccinated. That comes as no surprise to me. I have relatives in that city who refuse to be vaccinated. One is in hospital struggling to breathe as I type this.

The Omicron variant is multiplying infections at an alarming rate. President Cyril Ramaphosa said on Sunday that government was mulling vaccine mandates. I don’t know why they are over-thinking this; just introduce them asap.

The scientists who spoke before and after Meshoe on the same show all agreed that enforcing vaccine mandates would pass constitutional muster. As one of them eloquently put it, 3.5-billion people around the globe have already vaccinated, with adverse side effects only experienced by a tiny fraction of them. This is overwhelming proof that vaccines are safe, punching another hole in the religious zealot’s flimsy argument that they are not because they were developed in record time. Meshoe’s virtue signalling is wanting.

Also, imposition of a vaccine mandate doesn’t mean government officials in protective suits are going to storm homes to force jabs into arms. It simply means the unvaccinated will be restricted from certain places, including workplaces, public transport, schools, universities and other public buildings. Vaccine mandates can also empower businesses that interface with customers by barring the unvaccinated from their premises. They can be prevented from accessing restaurants, pubs, even grocery stores. The University of the Witwatersrand in Johannesburg is already leading the way, having announced that students, staff and others will not be allowed access to the institution unless they are vaccinated. Other universities are also announcing a vaccine mandate for staff and students, and even contemplating weekly tests for the unvaccinated. I love it; make anti-vaxxing extremely inconvenient and expensive.

There is no reason we must continue putting up with the madness of a few. Someone on Twitter even suggested the unvaccinated not be provided with hospital beds when they show up sick. Of course, this is unconstitutional; the right to healthcare is universal. However, I would encourage these dimwits not to show up at hospitals when they get sick because we don’t know what’s in the oxygen they will be administered when their lungs begin to fail. We don’t know what’s in the pills and medication they will receive there. On their warped logic, anti-vaxxers should not seek hospital treatment for any illnesses or injuries because they generally mistrust science. They must stick with herbal remedies or consult a sangoma.

Acting director-general of the department of health Nicholas Crisp said last week they had asked suppliers of vaccines to halt shipments to this country because we have an over-supply. This is absolutely incredible — while other countries on the continent are begging for vaccines, we have run out of people to inoculate, even though we have covered less than 40% of the adult population.

I do not for a second propose we discount Meshoe’s right to choose. He was talking up a drug called ivermectin on the show, saying he had evidence of it curing a woman from Covid-19.

This is a drug that is used to prevent parasites in animals. It is particularly good for horses. The US Food and Drug Administration (FDA) specifically warns against the use of ivermectin to treat Covid-19.

“Never use medications intended for animals on yourself or other people. Animal ivermectin products are very different from those approved for humans. Use of animal ivermectin for the prevention or treatment of Covid-19 in humans is dangerous,” the authority warns.

Meshoe and his ilk are free to deworm themselves at home. But public places are not stables; the unvaccinated must be treated as posing a danger to other people and isolated. Parliament, where the ACDP has offices, must enforce a vaccine mandate and lock him out.

Inside Eskom sabotage: how insiders helped the power station criminals