Barbara Masekela looks back on a life of love and loss in her ...

Memoir embraces her childhood search for identity, an exploration of roots and the events that shape our personalities 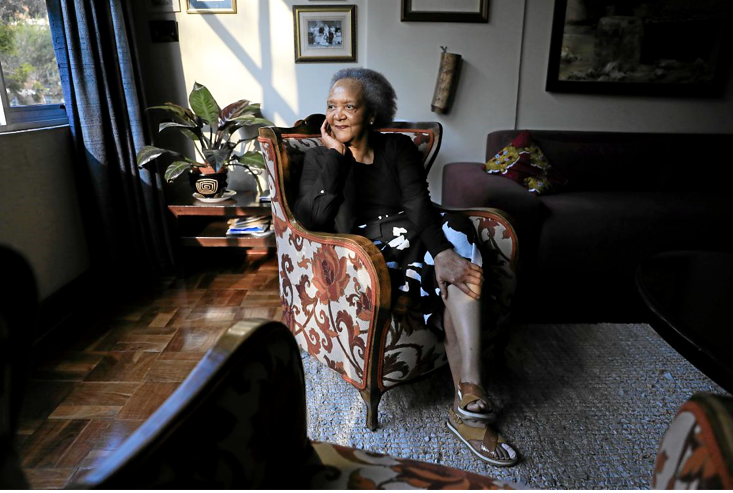 Barbara Masekela at home in her apartment in Killarney, Johannesburg.
Image: Alon Skuy

Barbara Masekela is variously described as an activist, academic, educator, poet, politician, ambassador and mother. Some people add “sister of Hugh” to that list, because the Masekela name celebrated around the world is most often associated with the trumpet maestro who died on January 23 2018.

These frequent references to her brother do not bother Barbara. He was her best friend and his death was in some ways a catalyst for the memoir she had been planning to write. The first volume, Poli Poli, is dedicated to Hugh, who Barbara called Minkie, a childhood nickname based on the character Mickey Mouse.

“I’m very happy I had a chance to write this now,” she says. “It started as a form of catharsis when my brother died. I’d looked after him for two years and I was in a very bad state, so it helped a great deal.”

She suddenly laughs uproariously. “I’ve been telling everybody how I wish my brother was alive because he would be acting as though he had written the book. But because we were great friends it was OK. I just gave him the stage, because he had that nature of the artist, you know.”

As close as they were, there were the inevitable early rivalries. Barbara was “the eldest daughter and the second child, and always to be preceded by my brother, who was two years older than me”.

She felt this more keenly as a child, she says. “When we were kids, the fact that everybody does something, or has to go through a certain process, doesn’t make it any easier, doesn’t justify it. In South Africa it is common that African children are raised by their grandparents. But that doesn’t mean that you don’t miss your parents or that you don’t have feelings of abandonment. I felt very resentful, and what made me even more resentful was that my brother lived with my parents and I did not. 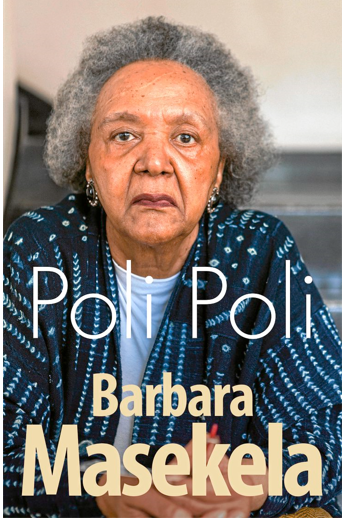 ‘Poli Poli’ by Barbara Masekela is published by Jonathan Ball Publishers. The title, as she writes in the book, means ‘a ladybird, the lucky omen, the great messenger in Ndebele culture’.
Image: Barbara Masekela 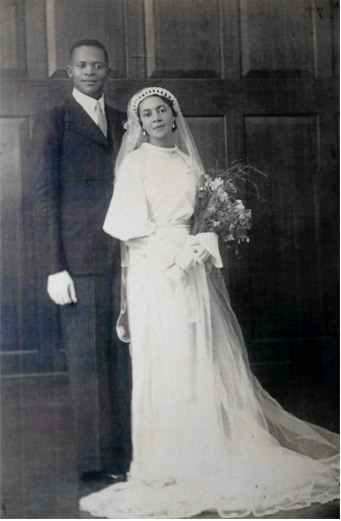 “In African terms, it is not politically correct to express anathema at this, but generations of African children, from time immemorial, have not had the opportunity to live with their parents, and they all grew up with that loneliness.”

The grandmothers are also not considered, says Barbara. “It is assumed that at their age — and my grandmother was only in her 50s but to me she was an ancient person — it is assumed that this is their work. Nobody thinks maybe there’s something else they want to do, maybe they need some time to themselves. It’s just something that has always been done and it continues to be done, and everybody accepts it.”

Barbara’s nickname as a child was uMdzwayidzwayi — “a gangling spectre, head high up in the air, witness to everything”.

Poised on a couch in her elegant, art-filled Killarney, Johannesburg, apartment, where she has reigned for 11 years and where she nursed Hugh during the last years of his life, this lithe and luminous 80-year-old seems settled in a place she calls home. She shares the flat with her younger son and her first-born lives nearby.

“Both my sons are unmarried and neither has children, and I am completely fine with that,” she says. Poli Poli, which takes us up to the day when 22-year-old Barbara leaves SA for 27 years of exile, is infused with a child’s search for identity, for belonging, for a home that embraces both body and mind.

This is a universal longing. In Barbara’s case it is also infused with pain. Hers is not a sentimental skip down memory lane; it is a journey of discovery, delving into the lives of those who gave her life, seeking the meaning of multiple losses, partings, displacements and departures.

“I was a very curious child and had a great imagination. I think that must have come from my parents, and the fact that I was separated from my mother and father made it even greater. I always felt that I was left out of something. I was never where I wanted to be. That started in my childhood — I didn’t want to be in Witbank with my grandmother, I wanted to be with my parents. And then I was with my parents and then I was sent to boarding school, and I didn’t want to be there, I wanted to be elsewhere … But I think it’s also a state of mind, I think there are people whose characters are like that, they always want to be somewhere else.”

What started out as a book about her childhood memories turned into an excavation of roots and history and the events that shape our personalities. 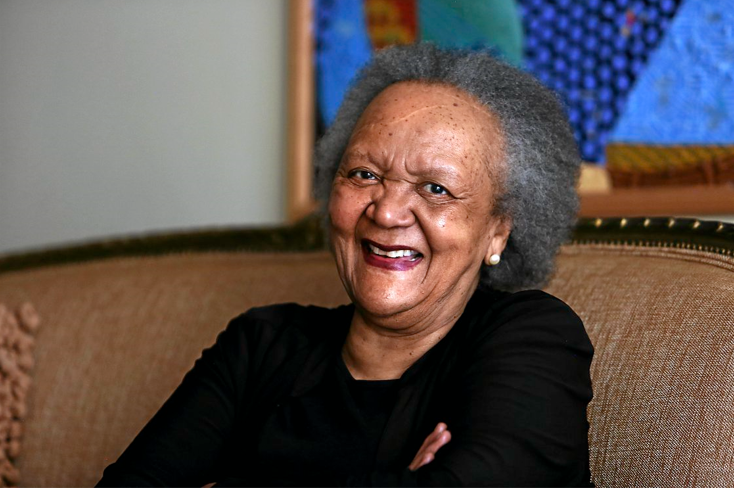 FOR HUGH Barbara Masekela says part of her purpose in ‘Poli Poli’ was to celebrate the strength of women, but we often go about this the wrong way.
Image: Alon Skuy

“In our society we tend to focus on the things we can touch, palpable things.” Barbara knocks her fist on the table to illustrate her point. “But when it comes to examining the soul and the mind, we don’t do that very much. This book was supposed to be about me but in the end it became a book about my grandmother, because as I was writing it suddenly came to me that her life had never been written about.”

This extends to the story of her mother, a social worker, and her father, a health inspector on the mines. A rarity in their time, they could live together in Johannesburg and commute from home to their workplaces.

“Nobody has written about those black women who were the first to come and live in urban areas,” Barbara says. “If you read the reports, they were regarded as a nuisance. Somehow they interfered with the whole scheme of having the males come and work in the mines. They were viewed as prostitutes, loose women, they weren’t given the dignity of any other scrutiny, and you don’t read about them.

Young Barbara, however, was with her grandmother. “We come from a very patriarchal society,” she says. “If there is one thing that black and white people have in common in South Africa, it is patriarchy.”

Part of her purpose in Poli Poli was to celebrate the strength of women, but we often go about this the wrong way, she says.

“Women tend to be viewed as strong. They must endure, they are praised for that. But it shouldn’t be required of human beings to suffer that much, to have to have that much fortitude. I don’t see it as a virtue.

“The book is about my journey with my grandmother. She’s not a nice person. She’s not your sweet granny. She’s tough, because she’s come from a tough background. Only later in life did I realise that actually there was such intense human interaction between me and my grandmother. Most of what I know about her I got from eavesdropping on her prayers, but was she really just praying or was she consciously telling me things?” 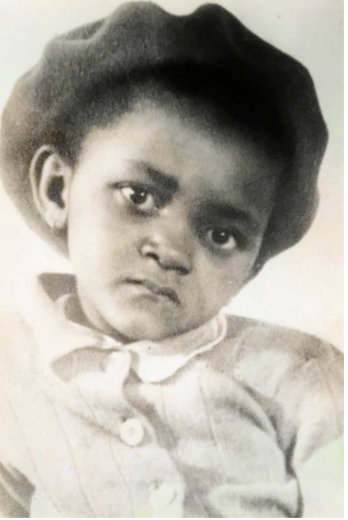 Barbara Masekela as a child. She says she always felt she was ‘left out of something’.
Image: Supplied

Barbara’s research involved visiting as many of the places she could find that figured in the multi-stranded histories of her forebears, and delving into history that was not taught in schools, including the complete conquest and wiping out of her grandmother’s Ndebele antecedents.

Her view is we have to explore and understand the past if we are to amend the present and improve the future.

She found cemeteries where the ink-written names on gravestones had long been washed away. She found abandoned towns and a house that might once have belonged to a relative of her maternal grandfather, a white South African of Scottish ancestry.

“I never had anything in my life that could make me imagine my grandmother’s life,” she says. “That’s why I wrote the book, because I wanted to get inside of her to see what she must have been feeling and thinking, and how strong she must have been not to say it. I felt I owed her this, that I owe it to all the grandmothers. I think we all owe them that, to not focus so much on our recent pain but try to think how they survived, and how in their survival they have made it possible for us to be here.”

Barbara has been asked many times about her own ethnicity, which she finds amusing. “I have had funny experiences. Black people will talk about me and then I answer them. I am so fortunate, because my brother and I spoke all the languages. South Africa is such a bad place for those subdivisions. I’ve travelled a lot in West Africa and there is no such thing as a ‘coloured’ person. People speak the languages of their fathers or mothers and are simply part of the community.

“That is one of the most unfortunate things about South Africa. When you look at my mum’s generation, my mother was not raised as a ‘coloured’ girl, she was just raised like all the children around her, as a person.

“If there’s something I hate about our country, it’s that ethnic obsession, it’s like a rule: ‘What are you?’ I just tell people I am a true South African.”

THE SECRET OF HISTORY

My grannies are sisters closed up and bound together in a past that was engulfed in an alien greed for land, for labour and for overall domination that negated every human aspiration to a life of dignity for Africans.

But worse is the story that is untold, of female people like them born into an unforgiving triumphalism, to remain victims of a patriarchy joined to a colonial conquest, unabashedly racist and equally paternalistic to its females.

They played the unsung role that guaranteed the emergence of every new generation since the first white man found his feet on African soil. They are the great secret of history, and have enjoyed the least attention for their supreme exercise in survival.

It is they who have borne the burden of regeneration that has brought us all here.