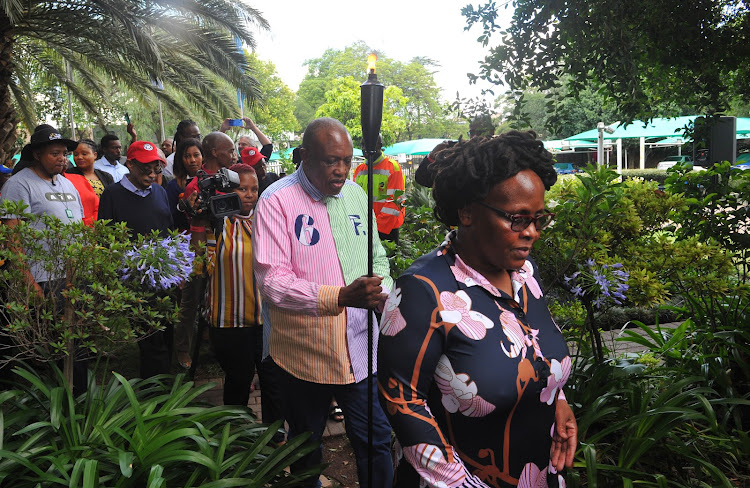 The Premier Soccer League (PSL) is in danger of stepping on a heavily soaped-up slip-and-slide that someone unwisely placed on a steep grass bank, at the bottom of which is the pool of administrative mediocrity of the pre-2000s.

A league that had made great gains in administrative quality since its launch in the 1996-97 season, seems intent on undoing much of that with questionable decision-making and shocking lack of professionalism.

The handling of the sale of Bidvest Wits to Tshakhuma Tsha Madzivhandila (TTM), the Royal AM court matter, the sale of Bloemfontein Celtic, and now Kaizer Chiefs’ request for match postponements after 36 cases of Covid-19, has raised serious question marks about the decision-making of the PSL’s senior managers. Particularly, it has shone a spotlight on the management conduct of acting CEO Mato Madlala, apparently with the blessing of chair Irvin Khoza.

The deafening silence on issues — apart from the odd press conference held after the fact, with limited questions allowed due to a televised format — and complete lack of interest in keeping the public informed on important developments, has been bewildering.

How could the PSL allow the sale of a club to Mkhize, after she had dragged the league through the courts and was facing a disciplinary hearing for Royal’s four no-shows in the promotion playoffs?

This was glaring during the negotiations between the PSL, SA Football Association (Safa) and the government for a return to play between March and June 2020. Countless PSL executive committee and inter-body meetings were held, where then-communications director Luxolo September would post their occurrence on the media WhatsApp group, saying he hoped to put out a statement afterwards. Almost always that statement never arrived, as September had to issue an apology, intimates his instructions were clearly coming from higher up.

That the PSL deemed keeping the public informed on a subject of that magnitude a low priority — the greatest challenge SA football ever faced — is mind-boggling.

For football media, it has been the exclusion from stadiums — with no explanation from the PSL — despite all other major sports including rugby and cricket allowing journalists to return once government regulations allowed from November 2020, that has made the current level of lack of professionalism seem personal. But it should not be just the scribes who are affronted. Journalists at stadiums inform the public. So it is a wider disrespect to the football supporter that’s being employed.

The new SA Football Journalists’ Association (Safja) wrote numerous letters to the PSL asking why journalists were not being allowed back to the grounds, and asked for meetings to broach the subject with Madlala. No meeting was granted, and one-line answers were returned. More than a year later, the situation remains unchanged.

It is symptomatic of the decline in standards that all the PSL’s previous CEOs, from Trevor Phillips to Brand de Villiers, prioritised keeping the public informed through media departments professionally run by communications heads Altaaf Kazi and then September.

September’s departure to join the Confederation of African Football (Caf) in December 2020, left a gaping hole with no senior spokesperson media can call for comment on issues. Madlala’s availability is erratic, whereas previous CEOs could always be reached on important issues.

And there have been important issues, quite apart from a global pandemic.

There has still been no official statement on the status — postponed or not — of the two games Chiefs have failed to honour against Cape Town City on Saturday and Golden Arrows on Wednesday.

The sale of Wits by Bidvest was unavoidable once that company decided it was necessary, but there were serious questions over what effort, or lack of, were made to ensure the continuation of a 99-year-old club in the National First Division (NFD). That TTM owner Lawrence Mulaudzi resold within eight months amid well-documented financial troubles raises questions as to what auditing was done, after he allegedly had trouble paying players in the NFD?

How could the PSL allow the sale of a club to Mkhize, after she had dragged the league through the courts and was facing a disciplinary hearing for Royal’s four no-shows in the promotion playoffs? How had Mulaudzi, who had struggled financially with clubs, been allowed to buy Royal’s NFD status?

If the NSL Handbook ruling is that club owners may not buy a new team within a year, and in the documentation the PSL named Nozipho Ngubo, Mkhize’s sister, as “the acquirer” of Celtic on behalf of Royal, how can such a bending of the rules be considered best practice? Why have the rule if it can be so easily circumvented?

The Royal saga has been followed by the Chiefs matter. Again, the PSL’s silence is deafening. There has still been no official statement on the status — postponed or not — of the two games Chiefs have failed to honour against Cape Town City on Saturday and Golden Arrows on Wednesday, or even the barest details of what was discussed in three executive committee meetings on Friday, Monday and Wednesday.

The league has seemingly backed itself into a corner. Facing a pandemic where flexibility seems necessary, the PSL previously denied NFD side Cape Umoya a match postponement in a similar situation, and an executive committee circular stating that Covid-19 issues cannot be a reason for putting off games.

The lack of decisive action means six days after Chiefs made their request for postponements public, no-one at the PSL seems to know if it has or will be granted, and if they do, they’re not telling anyone. It’s a situation that stands in embarrassing contrast to Tottenham Hotspur having their Premier League game against Brighton and Europa League match against Stade Rennais postponed, because they had just six players and two staff test positive for Covid-19, as Chiefs’ sporting director Kaizer Motaung Junior pointedly tweeted.

Thoughts go out to those affected @SpursOfficial pic.twitter.com/Bh3QhYa01N

We can confirm that our UEFA Europa Conference League Group G home fixture against Stade Rennais will not take place tomorrow after a number of positive COVID-19 cases at the Club.

In early November the PSL AGM was held at the Sandton Convention Centre, where no press conference was held afterwards. For the first time in years the financial statements were not released. It emerged in press reports via leaks that the league had made a R9m loss.

Last month Madlala completed an astonishing six years as acting CEO. Her and Khoza’s club ownership of Lamontville Golden Arrows and Orlando Pirates remain contentious as conflicts of interest. At 73, and having been chairperson for 25 years, does Khoza have a succession plan?

All this has been accompanied by three key resignations in two months. That of prosecutor Nande Becker, Murphy and finance manager Yusuf Seth emerging this week. And through it all an amateurish, North Korea-like silence that can only fuel speculation that this is a league in crisis.

Sentenced to oblivion for being boring