It beggars belief that Cele and Sitole are still in office

It beggars belief that Cele and Sitole are still in office

The irony is that while these two incompetents still have jobs, unemployment is now at an all-time high 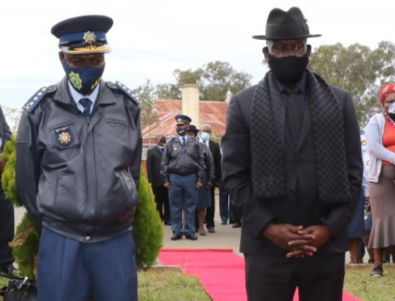 UNACCOUNTABLE The lack of leadership from SAPS national commissioner general Khehla Sitole, left, and police minister Bheki Cele resulted in many more lives being lost during the July riots than should have been the case.
Image: LULAMILE FENI

It is hard to escape the feeling that South Africans have given up, that we don’t care any more about our country and its future. Horrific acts and stunning revelations no longer shock us. Outrageous utterances are now par for the course. We have normalised unacceptable behaviour. We have accepted that we are led by dishonest men and women, by thieves and incompetents.

In the past week alone two devastating pieces of news hit the country. Anywhere else in the world resignations would have been handed in by shamefaced ministers and the heads of senior civil servants would have rolled. Here, just a few days later, we have almost forgotten the outrages. Life continues in a grotesque and tragic pantomime we call normal.

Last week police minister Bheki Cele told the SA Human Rights Commission’s hearings into the July riots that throughout the days of unrest he had no contact with the national police commissioner, Khehla Sitole. Let me remind you that at least 342 people died in those riots. Those are 342 sons, daughters, fathers, mothers, brothers and sisters of someone. Somewhere in our country today someone weeps for a dead child or friend who died that week.

Yet, the top policeman in our country was not there.

No one is held accountable for this mess. Ministers who continue to push policies that drive employers away continue to hold court, safe in their jobs.

“I don’t remember seeing the national commissioner during [all of the days of unrest]. I heard he said I was trying to find him in the wrong places ... he should have tried to be in the right places. The right places were where things were happening, where people were dying, and where looting was taking place,” Cele said last week.

When Sitole was asked why Cele could not reach him, he said the minister was “probably looking in the wrong place”.

Now, it is exactly five months since the riots. Cele has still not fired Sitole. President Cyril Ramaphosa has not lifted a finger to get rid of Cele. The South African public has not protested that these two egomaniacs who cannot, during the most deadly period of SA’s 27-year-old democracy, be bothered to make a phone call to each other are still in office.

We have given up. We are signalling to these two men and their comrades that it is OK to behave like this, to play marbles with people’s lives. Crucially, we are saying that those 342 black lives don’t matter at all.

The second shocking piece of news this week was the unemployment figures. Stats SA told us that the unemployment rate, according to the expanded definition of unemployment, increased by 2.2 percentage points to 46.6% in the third quarter of 2021 — the highest since the start of the Quarterly Labour Force Survey (QLFS) in 2008. The number of employed people decreased by 660,000 in the third quarter to 14.3-million, while 7.6-million people who are actively looking for employment are without a job.

To be a bit more stark about it, for every black man you see working, there is another able-bodied, ready-to-work black man who is without a job. For every black woman toiling at a job, there are nearly two who will not receive a salary this month.

The situation is even worse if you are a young person. Young people recorded the highest unemployment rates of 66.5% (for those aged 15-24) and 43.8% (for the 25-34 cohort). It simply means that for every young person you see working, two others are not.

This is not sustainable. This is a tinderbox. Yet there is no outrage, no shock or anger. It is as if no one cares. No one is held accountable for this mess. Ministers who continue to push policies that drive employers away continue to hold court, safe in their jobs.

What should be happening is that there should be a state of emergency in the country. Every single policy that drives jobs away should be dumped within a week. There should be no holy cows.

Same thing on the issue of the police minister and his commissioner of police. They should be shown the door and wide-ranging reforms should be implemented. This is not a joke. Criminals are celebrating in this country because they know that Cele and Sitole are not fit for their jobs.

Yes, I know you are laughing as you read this column. No changes will be implemented. Nothing will happen. The rot is deep and it will continue for a long while to come. Ramaphosa will continue to vacillate. Cele will stay in his job. Jobs will continue to be lost. No one cares.

The only hope left is the voter. In two years we go to the polls again. That’s the only time that the voter will be able to send a message that can stop this rot. Unless you, the voter, are happy with all this.

Omicronomics: what the new variant could mean for SA’s economy