Unless Ramaphosa belatedly sees sense and gets rid of corrupt members, the party is doomed to die at the next poll 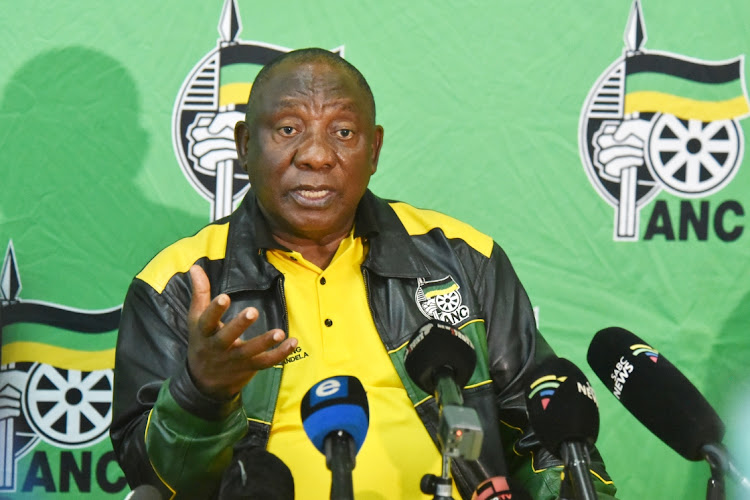 AT A CROSSROADS If President Cyril Ramaphosa is serious about eliminating corruption, the public needs to start seeing results.
Image: Freddy Mavunda

As the dust settles after the ANC’s near-annihilation at the local government elections, one of the main questions the organisation faces is what the SA Communist Party often asks: “What’s to be done?”

Though it was initially a title of a novel by Nikolai Chernyshevsky, it’s a question made famous by Vladimir Lenin who used it as the title of an article in 1901, in which he argues that the mere existence of class struggles and, in particular, exploitation of workers will not lead to a hoped-for victory by Marxists. Lenin agitated for the formation of a political party — which led to a split of the Russian Social Democratic Labour Party into the Bolsheviks and the Mensheviks.

But in the 2021 ANC context, the question is most apt. And if the answer to the question leads to a split, such a split might be in the interests of the “real” ANC. There are a number of reasons scholars and curious townspeople believe spawned what appears to be the accelerated demise of the ANC. These include its failure to create jobs or upend poverty and the indignity with which this comes. Others say a scourge of corruption and tenderpreneurship. Some say, crazy though this sounds, an SABC programme called Service Delivery Gauge caused the ANC’s failure in the elections.

In the end, the question, as was made famous by Lenin, remains: what is to be done?

But indeed what has rendered the continent’s oldest liberation movement a lethargic political player and a perpetual saboteur of itself, is multimodal. In this piece, I elect to deal with the ANC’s missteps ahead of the elections, what it could do to improve its chances ahead of 2024, and how likely it is to do the right thing.

It was not an accident of history that one of the CR17 slogans was a “return to the rule of law”. The so-called nine wasted years were about corruption on a grand scale, the type that gnawed away at the stature of the ruling party. The historical mission for Cyril Ramaphosa was to turn around the ANC’s image. Ramaphosa had two options: initiate a meaningful turnaround or use his public relations machinery in both the state and ANC to create make-believe stuff.

What has rendered the continent’s oldest liberation movement a lethargic political player and a perpetual saboteur of itself is multimodal.

One of the things that caused the ANC to perform badly in the last elections was “unity”. Yes, the ANC’s unity is a terrible killer of the movement. One big misdiagnosis of Ramaphosa after his slim victory at the ANC elective conference at Nasrec in 2017 was that the ANC needed to be united to be stronger. This meant he needed to work with people he knew had brought the ANC to its knees. These were people even he believed were crooks. This unity made him want to keep up appearances. He knew he was being sabotaged, but he needed to play nice for the sake of unity.

After the ANC’s victory in the general elections of 2019 with him at the helm, he dished out positions to people who were the source of the ANC’s embarrassment. In this way, he too, lost credibility in the eyes of those who believed he a was Mr Fix It of sorts. He then made statements such as that ANC unity came ahead of all else, implying, to those irked by inaction about corruption, that he too would drag his feet and not treat corruption like the cancer we are told it is.

The cabinet appointments were almost a negotiation, it was reported then, with a then powerful Ace Magashule whose famous last words four years ago were: “It’s just five years, comrades,” implying Ramaphosa would be gone by December 2022.

What Ramaphosa needed to do was to draw a line in the sand, dare his nemeses and allow the discredited to break away if they so wished. They were not going to. Not many of them are like Julius Malema. They can’t start and sustain their own versions of the EFF.

In addition, Ramaphosa needed to ensure that the state capture commission was given just one or two extensions. This meant that the state capture report needed to have been out before the local government election, followed by swift action by law enforcement agencies. This was the one thing that would have helped him do away with the narrative of the ANC as an organisation of “amasela (thieves),” as national chair Gwede Mantashe characterised it a week before the elections.

Ramaphosa needed to demonstrate, not through weak public apologies and pleas but through action, that the ANC was taking stern action against people implicated in corruption and who, in turn, created a public image crisis for the ANC. Hindsight, they say, is 20/20 vision. We know now that the electorate had not bought fully into Ramaphosa’s PR that he was fixing the country, one case at a time. It’s easy to see why. Even though a few have been arrested, there are no major cases of corruption where there are convictions to talk about.

And if indeed corruption is the crisis he told us it is, Ramaphosa had a responsibility to capacitate the Investigating Directorate, the Hawks, SIU and the National Prosecuting Authority to handle corruption cases in the same way crimes were handled during the 2010 Soccer World Cup. What am I saying? An effective turn-about strategy never follows the normal course of things. Similarly, Ramaphosa’s war on corruption needed to have those who were arrested being subjected to swift justice in special courts set up to prioritise corruption cases.

At conception, the state capture commission was supposed to be a showcase of the ANC government holding, largely, its own accountable. But it has ended up being mere evidence that the ANC is corrupt. This damaged the party even further. What is missing is action against the corrupt — a game-changer for Ramaphosa.

At conception, the state capture commission was supposed to be a showcase of the ANC government holding, largely, its own accountable. But it has ended up being mere evidence that the ANC is corrupt.

A case, for example, involving businessman Edwin Sodi and Ace Magashule ought to have been put through trial not longer than a month after the suspects were arraigned. If the suspects were guilty, then the public would have heard this from our judges and magistrates, not as claims from politicians. Yet, today, Magashule continues to file papers in court alleging, and unfortunately for Ramaphosa and the ANC being believed in some quarters, that the charges against him are politically motivated. They are meant to keep him away from his constituency until after the ANC elections next year in December. Putting Magashule through a speedy, well-considered trial that either frees or incarcerates him, denudes this argument. Yet, si la (we are here).

It’s a problem of having power but being afraid to use it. Or trying to forge unity with crooks. When former ANC president Thabo Mbeki faced similar hostilities from a group he termed the “ultra-leftists”, he warned against a quantitatively bigger ANC made of “members who, among other things, will have very little familiarity with the history and traditions of the ANC, its policies, its value system and its organisational practices”. He then told them it might serve the ANC well if its members were “better fewer, but better”.

Joel Netshitenzhe, the former ANC policy chief, once said that unity with state capture-accused people is acquiescence. So, this unity, if not handled differently, will ensure the actual demise of the ANC in 2024.

From a distance, it might appear to Ramaphosa that losing almost half, even though I think the RET forces are now less than a quarter, of the ANC would imperil its prospects at the polls. But losing scandal-ridden people might, in fact, reawaken millions of disenchanted voters, those who held back their votes because voting for the ANC meant, for them, voting for the same “amasela”.

But the party of Oliver Tambo might deflect and blame the SABC for its mess, as we saw this week. When it does this, we must know that it believes it can win the next elections by using the SABC to create make-believe government performance. It means it believes it can fool the people into thinking that their lived conditions are not as poor as they themselves experience. Tragic, this. Were this to happen, we might as well say the ANC is dead, long live the ANC.

The ANC can be cocky all it wants. In the end though, it draws its legitimacy from people who don’t even pay for ANC membership — its supporters. It is ANC supporters, not just its members, that Ramaphosa must focus on pleasing. When he talks unity with crooks, he alienates voters and creates, internally, a veneer of coherence that, sadly, leads him to an electoral dead-end. I hope he can see the dead end from a distance and that makes the answer to the question made famous by Lenin clearer ...