It’s no wonder populist ‘cleaners’ are the salve of the jaded, but they’re not the answer. Moderate politics is 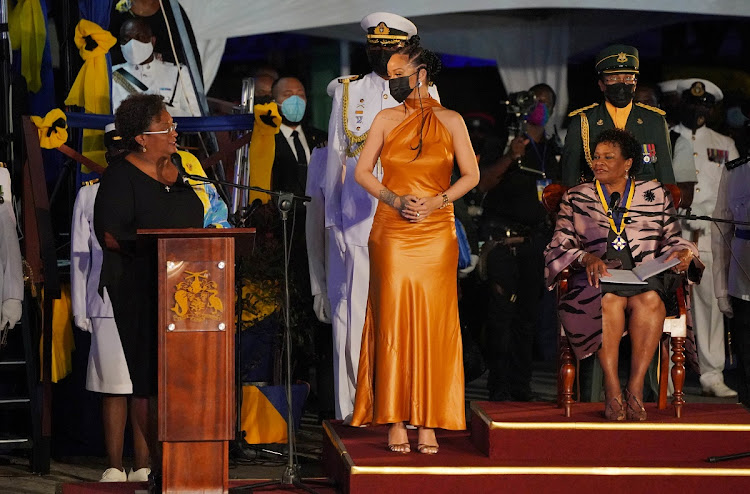 BARBADOS'S BABE Singer Rihanna attends a presidential ceremony to mark the birth of a new republic in Barbados at Heroes Square in Bridgetown on Tuesday.
Image: Jonathan Brady/Reuters

The Atlantic island of Barbados has become the latest of the former jewels of Empire to give the Buck Palace mob the boot, installing pop megastar Robyn Rihanna Fenty as its new totem of majesty. Long live the queen; long live Rihanna, whose one-shoulder designer outfit in electric orange, with black mask, at a ceremony in the capital Bridgetown this week hinted at a stylish up-yours to 400 years of horrible history.

About a year ago Barbados’s republican-inclined government removed the bronze statue of the English naval hero Lord Nelson from the main square in Bridgetown, as the tropical storm that is the Black Lives Matter (BLM) movement reached the island in recent years. No great surprise that Nelson has been unmasked as a big fan of slavery, which is significant in that he essentially ran world shipping before his assassination in 1813. Some argue his death actually hastened the demise of the slave trade, with which the history of Barbados is closely tied.

In any event, it seems the country is flat broke and the Covid-19 pandemic has hammered tourism, one of its main sources of hard currency and employment. Formerly it was the world’s biggest sugar exporter and a paradise for the elite, but hell on Earth for slaves from Africa. By way of restarting its economy, I humbly suggest Nelson be replaced with an over-life-size Rihanna likeness, preferably capturing something from her Umbrella video, which will boost tourism numbers no end. Of course, tourists who still want to see the Nelson statue can go to the museum, where this “relic’’, as it was called by the island’s prime minister, Mia Mottley, is being stored, if not exactly displayed.

Watching Rihanna being burdened with the hopes of her people, it’s telling of the times we live in to behold the old political elite bend knee so deeply and nervously to the superstars in the age of celebrity and instant media. Witness how teenybopper heartthrob Justin Bieber is being blackmailed to not visit Saudi Arabia. His singing would “aid and abet’’ the admittedly murderous regime there, we are told, but would it “aid and abet’’ the barbarous princes any more than the full diplomatic ties the Saudis have with the rest of the world? More than the billions in arms sales to wage proxy wars on behalf of the West in the region? No, only a Canadian singer who made his name on YouTube is deemed to have the power to “aid and abet’’. Guns and oil, not so much.

In the age of so-called 'respectable populism', the power of social media is amplified exponentially by popular faux-news celebrities.

At home, witness how our political parties always have a top-billing song-and-dance act to curtain-raise their party yawn fest, such is the interplay between politics and popular culture.

In the age of so-called “respectable populism’’, the power of social media is amplified exponentially by popular faux-news celebrities. The proliferation of social media “news and opinion’’ offerings, which operate in the new tech space under the ill-deserved protection of free speech, blithely promote “another point of view’’, a parallel universe. Secretly, followers like the subliminal antisocial and reactionary messaging.

The enticing cocktail of celebrity, social media and populism of the big clean-up variety is a salve for people who claim to have grown tired of the broken promises of conventional politicians. The traditional and constitutional political system no longer makes much sense to them; it’s too ponderous and uncertain for the instant-answers era. Too complicated, anyway. They don’t want excuses, especially complex ones. Nuance is nerdy.

Nowhere has the outcome of the intersection between celebrity, social media and political reality been more obvious than in Ukraine, whose president, Volodymyr Zelensky, is a former comedian and TV star. He made his name in the starring role of his hit TV show, Servant of the People, about a fictional president of Ukraine. He later registered the show’s name as the name for his new political party, the Servant of the People. For his latest bit of stand-up, he’s walking blindfolded into a war with Russia, whose president, Vladimir Putin, is notoriously hard to amuse.

What’s interesting about Ukraine was how the pro-European Union, establishment-choice president, Petro Poroshenko, lost the 2019 election to a TV funny guy and none of his highly-paid advisers could say how an upstart had done it.

Our own 2024 elections will no doubt reinforce what we have seen in these local government elections: namely millions of voters open to seeking a new political home or, at the very least, a halfway house for their expectations from their politicians. In some cases new parties emerged under the not-so-hidden guise of racial mobilisation for a specific sectional end; in other cases strong personalities put together makeshift political machines around flimsy manifestos and a hunger for position.

Our own 2024 elections will no doubt reinforce what we have seen in these local government elections: namely millions of voters open to seeking a new political home or, at the very least, a halfway house for their expectations from their politicians.

What role will celebrity power and the relentless pulse of social media play in our political future? Will populism of the hi-tech variety catapult the rich and ambitious, someone like Herman Mashaba, to power, campaigning on the same bogus drain-the-swamp-type promise that the TV celebrity-turned-politician Donald Trump gave after his 2016 election win in the US?

Perhaps we’re too savvy, conservative even, to be swayed by social-media mirages, but what happens when electorates become younger, less encumbered by history? What if the trending political message – for example, a promised Trump-style crackdown on undocumented African migrants – strikes a chord (goes viral?) among voters? How will the traditional parties react? Will they, too, shift hard right?

It’s difficult, as the ANC is learning, to get voters excited about the establishment.

Incumbent politicians do, however, have the advantage of a public purse to spend, either wisely or squandered on corruption and ineptitude. Populist movements thrive because of the appalling record of governments, not just in SA. They come into power on a popular euphoric wave of being anticorruption.

Modern governments live and die on social media, in this age of instant scrutiny. The populists are hardly going to do a better job than those they’ve replaced, which is all the more reason to nurture a moderate political culture that depends on well-reasoned and informed participation, and not the social-media driven simplistic solutions trending on the day of voting.

Anyone for tennis? Except you, China