Instead of helping ‘wretched’ Africa, the world has shut it out, something it hasn’t done to rich countries 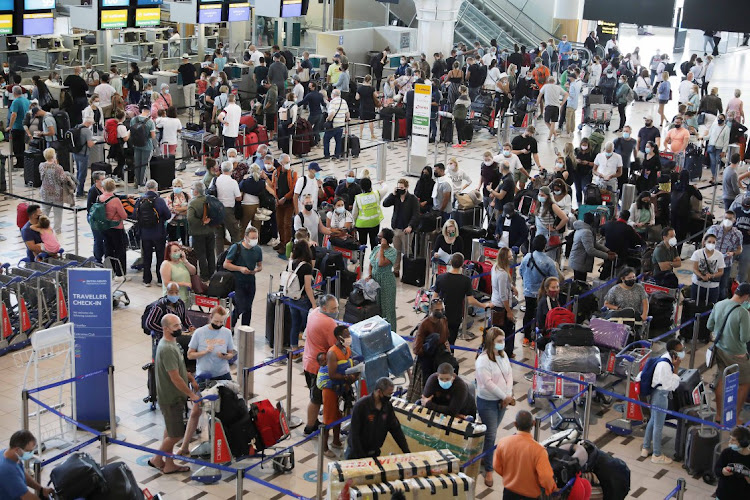 NO GO Passengers at Cape Town International Airport on Saturday after their flights were cancelled because of the Omicron variant.
Image: Esa Alexander

If you had any lingering doubts about the unbroken link between racism and disease, then events of the past week should have opened your eyes. No sooner had South African scientists announced the discovery of the SARS-CoV-2 Omicron variant on November 24, but the West reacted with a fierceness that would have embarrassed its colonial progenitors, from Rudyard Kipling (The White Man’s Burden) and Joseph Conrad (Heart of Darkness) to the streams of imperial missionaries and scientists sent to save and civilise the Dark Continent.

Instantly, flights from SA to the UK and, soon after, the US, were banned. This despite the variant also being found in Belgium and Hong Kong, and that little was known at the time about “the South African variant”, as some idiots on overseas television parroted their politicians. “South African countries”, said another geographic illiterate on NBC news in reference to the shutting off and shutting out of countries in the region. In a BBC clip that went viral, an angry Dr Ayoade Alakija, the co-chair of the AU’s Vaccine Delivery Alliance, put her expert finger on the problem: “The travel bans are based in politics and not in science ... nobody is locking away Belgium, nobody is locking Israel, why are we locking away Africa when the virus is already on three continents?” Good question; here’s the answer.

In the Western imagination, Africa is a place of misery and disease. Watch a random “Africa” episode on BBC or CNN and you are less likely to see tributes to the marvels of African science and scientists and more likely to see images of death, destruction and illness. The insults kept coming thick and fast. In a television interview this week with SA and the continent’s most distinguished infectious diseases expert, Prof Salim Abdool Karim, CNN ran a heading under his speaking head: “The [Anthony] Fauci of South Africa.” Not to be outdone, the execrable governor of Texas tweeted with astounding illogic and unvarnished racism the warning that “immigrants have recently been apprehended crossing our border illegally from South Africa. [US President Joe] Biden is doing nothing to stop immigrants from South Africa entering illegally.” His audience is white America, his target, diseased Africans.

Rich nations that refuse to provide affordable access to vaccines at the speed and quantities required are the same ones that will shut down nations in the Global South because of the threat they supposedly pose to citizen health in the Global North.

And it’s happened before, in Texas and elsewhere, during the Ebola crisis. “In both the United States and Europe,” observed a Princeton University scholar of that time, “Ebola is increasing racial profiling and reviving imagery of the Dark Continent.” In Ebola, Race and Fear, the writer, Anthony Zurcher, concluded that since the disease is associated with blacks, it fuels and feeds off already existing racism in Western nations.

It would take several days before self-correction came from the West. Controversial British media personality Piers Morgan, in a rare moment of clarity, tweeted the obvious: “Omicron is Not a ‘South African variant’, it’s a Variant Spotted and Reported by Brilliant South African scientists.” The Washington Post led with “South Africa ... found the Omicron variant first.” Writing in the New York Times this week, economics journalist Peter Coy’s article carried the headline, “South Africa Deserves a Big, Fat Prize”, rather than the punishment of a travel ban for isolating Omicron and, in an act of scientific integrity, informing the World Health Organisation (WHO) of the variant, saving time and lives across the world. That’s right, punished for our world-class scientists and facilities with the capability for doing advanced genomic sequencing that helps other countries.

What was not anticipated in the fury of media reporting was that the travel ban not only has economic impacts on SA’s upcoming tourism season, it undermines the advance of the genomic sciences itself. The world-renowned bioinformatician from Stellenbosch University, Prof Tulio de Oliveira, made this announcement on Twitter: “Today, I spent a big part of my day talking to genomic and biotech companies as soon we will run out of reagents as airplanes are not flying to South Africa! It will be ‘evil’ if we cannot answer the questions the world needs about #Omicron due to the travel ban.”

There is an important lesson to be learnt from this shameful episode in the international politics of disease. Rich nations that refuse to provide affordable access to vaccines at the speed and quantities required are the same ones that will shut down nations in the Global South because of the threat they supposedly pose to citizen health in the Global North. The best response to this type of imperial behaviour is for government and the private sector to make much greater investments in the development of South African science and scientists. For to paraphrase the late Steve Biko: Black Country, you are on your own.