Wilbur Smith’s father couldn’t have been more wrong. The author has died a multimillionaire, aged 88 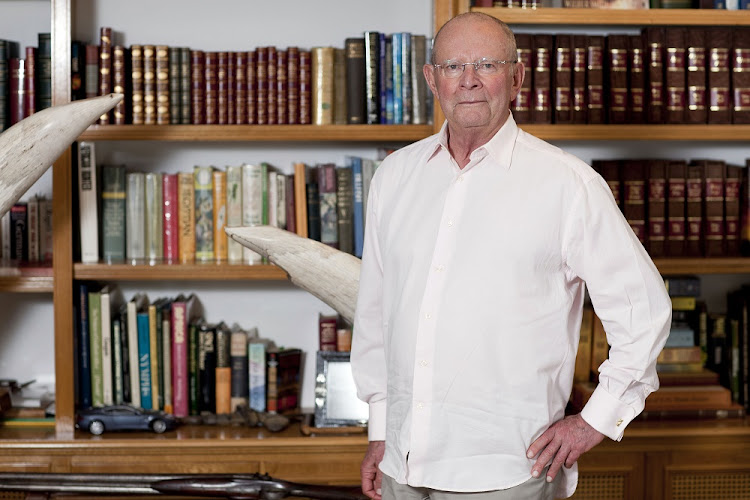 Best-selling author Wilbur Smith, who has died in Cape Town at the age of 88, never pretended he was an artist or that what he wrote was literature, and never lost any sleep waiting to make the Booker shortlist.

“I know what I am,” he said. “I am a storyteller. If I’m going to be judged as a literary figure, then I know I’ll fall short of any standards you put up. But if you are going to judge me as an adventure writer, then I know I’m not too bad.”

Judging by the numbers he was one of the best, if not the best, in the business.

He sold upwards of 140-million copies, translated into at least 30 languages.

He was so famous that in the end he didn’t even have to write them himself; all it took was his name on the cover.

In 2012 he signed a six-book deal with Harper Collins for a reported £15m (about R270m at the time), though he wouldn’t actually be writing any of them so much as guiding “carefully selected co-authors”, as he put it.

He had so many ideas and characters “waiting to have their story told” that he’d never have enough time to do it himself, given he took the best part of a year to write each book. So he used collaborators, young published authors whose work he liked.

He’d work on the outline with them and when he thought they had something sufficiently exciting, leave them to get on with it under his supervision.

“When the book is delivered, I take over to make it my own,” he explained. It made his fans happy and him even richer, which he once confessed never stopped being a motivation, no matter how many hundreds of millions he’d made.

Of his 48 novels, 12 were co-authored, including all of those in the Ancient Egypt series, the latest of three.

He sold upwards of 140-million copies, translated into at least 30 languages.

Smith was born on January 9 1933 on a 25,000-acre cattle ranch in Broken Hill, Northern Rhodesia (now Kabwe, Zambia) owned by his British-born father.

His mother inspired him with a love of reading. His early favourites were Biggles and the novels of CS Forester and John Buchan. H Rider Haggard’s King Solomon’s Mines, with its tales of death and danger, heroism and savagery on the African continent, was his favourite and a major influence on his own work.

His greatest stylistic influence came from reading Ernest Hemingway and John Steinbeck, whose sense of humour and humanity he found inspiring.

His father hated his “unnatural” obsession with books and he had to do most of his reading in the outhouse.

In spite of this, he hero-worshipped him. His most abiding and influential memory was  how his father saved the family from man-eating lions which attacked their camp one night.

He had a faded photograph taken the morning after of him and his father kneeling side by side, each holding the head of a dead lion — his father, wearing his pyjama bottoms, his nose swollen and lacerated; Wilbur wearing one of his father’s hats and mimicking his grim and heroic expression.

It was a scene he wrote in his novels in many different ways over the years, he said.

Instead of books, his father gave him a rifle when he was eight that began a lifelong love affair with guns and hunting. It had been owned by his grandfather, Courtney James Smith, who had commanded a machine-gun team in the Zulu war.

His fictional Courtneys were based on the folklore he gleaned from his grandfather, who told him gripping stories about his experiences in Africa before the turn of the 20th century. These fired his imagination.

His father hated his 'unnatural' obsession with books and he had to do most of his reading in the outhouse.

He used Courtney as the family name in his hugely successful series of African historical sagas.

Good adventure writing was about choosing characters from real life and then embroidering them a bit, he said. Saffron Courtenay was his favourite and strongest creation, and his best-selling Courtney Series was the longest running in publishing history, spanning generations over three centuries, from the dawn of colonial Africa to apartheid-era SA.

He contracted cerebral malaria when he was 18 months old. It was so serious there were fears he’d be brain damaged if he survived.

“It probably helped me because I think you have to be slightly crazy to try to earn living from writing,” he only half joked later.

His father certainly thought so. After an academically unimpressive and hated school career at Michaelhouse in the KwaZulu-Natal, where the only thing he shone at was composition, his father vetoed his desire to be a writer — “Don’t be a bloody fool, you’ll starve to death” — and demanded he get a proper job.

He studied commerce at Rhodes University, was admitted to hospital three times in one term after being in motorbike crashes, became a chartered accountant and went to work with the then Rhodesian Inland Revenue Service.

He was bored stiff and wrote a novel on the stationery, which was rejected 20 times. He later destroyed the manuscript to stop it being published after his death.

Then he started writing short stories for magazines, one of which expanded into a novel. Two and half years later he completed When the Lion Feeds, the tale of a young man growing up on a South African cattle ranch, also on the Revenue Service’s stationery.

He immediately struck gold. It became an instant best-seller, though not in SA, where it was banned for 11 years, along with his next three books, for its “indecent, obscene and objectionable” content, and he was put under security police surveillance and his phone tapped.

When the Lion Feeds was the first of what became 15 sequels, making him more money than he’d ever dreamed was possible while having so much fun.

He was bored stiff and wrote a novel on the stationery, which was rejected 20 times. He later destroyed the manuscript to stop it being published after his death.

He never found writing an ordeal. “My characters sweep me along with them on a voyage over which I have very little control,” he said. “I merely follow and record their strivings and endeavours.”

The creative process never got easier, but writer’s block was “a dirty five-letter word (that) doesn’t apply to me at all”.

Africa was a ready and endless source of material for him, the gift that never stopped giving.

All his novels were set on the continent, mostly family sagas, all of them about the most extraordinary African adventures in which, as Stephen King wrote approvingly in the publicity blurbs, “the bodices rip and the blood flows”.

His focus was entirely on Africa, “a beautiful, violent, and bloody land”.

“I am African. I am part of Africa, and I love the people, the place and the wildlife.”

He would start a novel when he was sure about how to write the opening, “after months and months of research where I live in the world I want to write about. I never take notes. Then I set off, letting my imagination roam around the story archipelago in my mind.”

Every two years he’d write for eight months, “like a businessman”, working eight hours a day. It took him this time to finish a book.

He kept churning out books to the end of his life, propelled by an insatiable desire “to see what happens next”.

His private life was a disaster. He was married four times, two of them ending in divorce. His relationship with his children was non-existent. He admitted he was a lousy father.

Meanwhile, his private life was a disaster. He was married four times, two of them ending in divorce. His relationship with his children was non-existent. He admitted he was a lousy father. After one disastrous falling out he refused to see two of them for 30 years.

In 1971 he married his third wife Danielle Thomas. Five months after she died of brain cancer in 1999 he saw Mokhiniso Rakhimova, a Tajikistani law student 38 years his junior, going into a London book shop, was mesmerised by her “lovely little bottom”, followed her in, took her to the shelf where his books stretched in a seemingly unending line, persuaded her to buy one instead of the John Grisham she’d chosen, signed it, made a play for her and married her several months later.

He’d just survived a publicised scandal involving a €300-an-hour London call girl who threatened to go public about their encounters unless he paid her €10,000. He was appeased when while trying to blackmail him she told him, he proudly revealed to a Fleet Street journalist, he was “a sex machine”.

How did he still do it at his age, asked the incredulous journo?

He is survived by his fourth wife Mokhiniso, who was with him when he died unexpectedly at his house in Constantia, where he wrote most of his books, and three children.

Lightbulb moment, ANC ... we’re in the dark physically, not mentally