They say everyone has a price. What will the ANC’s be?

They say everyone has a price. What will the ANC’s be?

Local leaders are putting pressure on the national structure to jump into bed with the EFF, but at what cost? 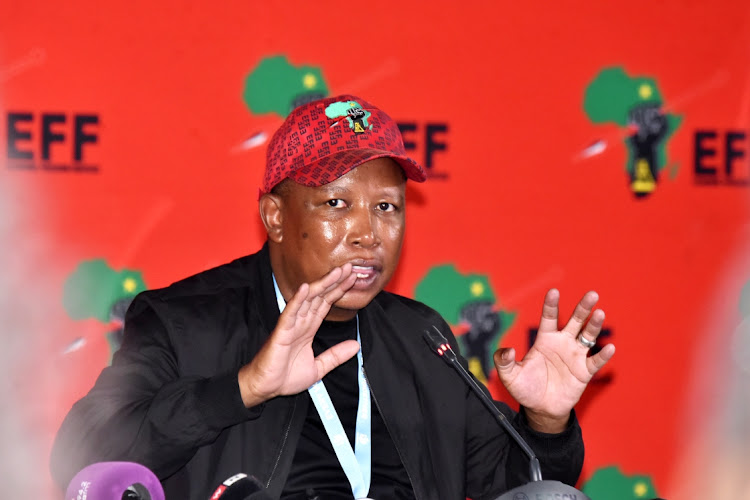 MR 10% There'll be no hoo-ha if EFF leader Julius Malema and his comrades join hands with the ANC. The only new dynamic will be the bolstering of the RET brigade.
Image: Freddy Mavunda

I hate to break it to you, but the ANC won the local elections on November 1. Yes, I know the party’s national take went below 50% for the first time in democratic SA. Yes, it has been soundly defeated in metros from Tshwane to Cape Town to Nelson Mandela Bay.

Yet, think about this: who are the rest of the parties that “forced” the ANC below 50%? The EFF is a splinter of the ANC. Its policies and those of the ANC’s radical economic transformation (RET) faction are a carbon copy of each other. If Julius Malema and his crew were to walk back into the ANC today there would be no ructions. It would be as if the ANC Youth League (ANCYL) is back home and the only new dynamic would be that the voice of the RET faction is bolstered.

When Malema rushed to have “tea” with former president Jacob Zuma in Nkandla earlier this year it was not a meeting of opposites. It was a meeting of two like-minded comrades who had both been kicked to the margins of their party by the same man, President Cyril Ramaphosa. They had merely fought back differently.

So the 10.6% the EFF won in these local elections are, in a roundabout way, ANC votes, if on a slightly more radical and populist front. They are the children of Peter Mokaba, the fiery ANCYL president of the 1980s and 1990s.

This realisation is now important because more and more provincial and regional ANC leaders are putting pressure on the national structure to work with the EFF in coalitions. Nothing wrong with that, except the EFF has put some interesting conditions down before it will play ball with Ramaphosa’s party. At first the EFF said it wants the ANC to agree to land expropriation without compensation by changing Section 25 of the constitution, Reserve Bank nationalisation, formation of a State Bank, a state pharmaceutical company and many other “national” demands. The ANC has rejected this, but now the EFF has slightly more palatable demands. It wants to trade support for the ANC in Gauteng metros, for example, by getting outright control of a municipality such as Tshwane, without any hindrance or interference from the ruling party.

Now if you are a resident of Tshwane you may not want to hand over your metro to people who looted VBS Mutual Bank, but in their hunger for power the ANC’s young leaders are happy to let this happen as long as they get to loot Ekurhuleni and Johannesburg, and wherever else they can still have power.

Now if you are a resident of Tshwane you may not want to hand over your metro to people who looted VBS Mutual Bank, but in their hunger for power the ANC’s young leaders are happy to let this happen as long as they get to loot Ekurhuleni and Johannesburg, and wherever else they can still have power.

This power play is unfolding across the country where the “opposition” has allegedly unseated the ANC. In Maluti-a-Phofung, possibly the worst-run municipality in the country, a new grouping challenged the ANC for supremacy. Now this was a very interesting bunch of people. MAP16 was formed after the ruling party expelled 16 ANC councillors who exposed the corruption of their own comrade and mayor, Vusi Tshabalala. Ace Magashule, ANC chairperson and premier of the province at the time, protected and promoted Tshabalala.

What we are seeing is that the ANC is not dying. Look at the 66 hung municipalities. Many of the “independents” and small parties are disgruntled ANC members who still want a shot at top office. The numbers bear this out, even in the case of the EFF. Journalist Stephen Grootes has pointed out that the EFF won 2,446,662 votes in 2016. In these elections it won 2,419,424 votes. It’s an ANC splinter that is set, with no growth.

Speaking at the ruling party’s “thank you” event in Soweto after the elections, Ramaphosa said the only positive for the ANC was that South Africans who previously voted for the party chose to stay away instead of voting for other parties.

“If [it is] a sign that they are not willing to give other parties a chance ... it is now our duty to go back to them and convince them of our renewal process,” said Ramaphosa.

He may be right. Yet he also needs to realise that many of the disillusioned are in the political sphere and they now have leverage over him because they have a seat or two in this or that municipality.

It will be Ramaphosa’s job to keep them aligned to the ANC, but at what price?