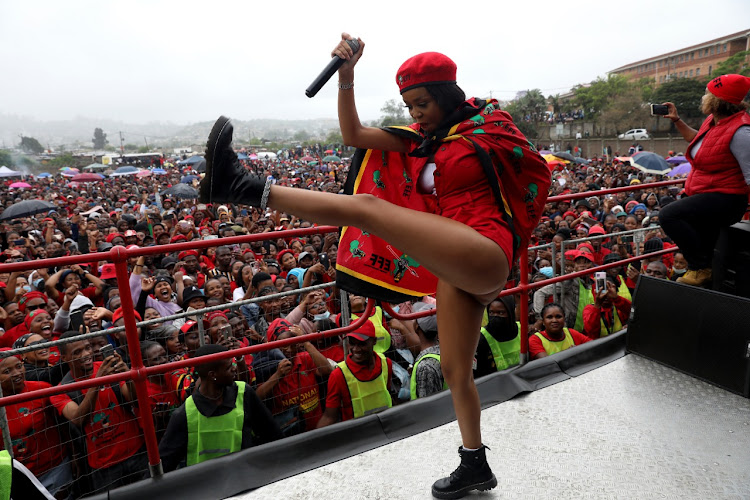 JACKBOOT OF ALL TRADES Despite much pre-election hype, the EFF failed to win a single municipality.
Image: SANDILE NDLOVLU

It’s tempting to call Monday’s election a train wreck, but train wrecks usually involve more people and you don’t see them coming from quite so far away.

A great deal has been written about the dismal turnout, with some pundits suggesting that it is a crisis for democracy in SA. If this is true, it’s a crisis that’s been brewing since at least 2019, when just over half of the country’s eligible voters stayed home.

Either way, we’re here now, heading towards 2024 with an electorate so gatvol and ready to give up and burn it all down that it gave the Cape Independence Party 8,000 votes.

Not everyone is miserable, of course.

ActionSA shot the lights out on its first outing, even without its name on the ballot paper.

The Patriotic Alliance did 1,300% better than in 2016, while the Freedom Front Plus is up 200%, stealing the DA’s lunch as a first step to trying to steal a chunk of the Western or Northern Cape as its volkstaat.

What can one say that the electorate hasn’t said far more eloquently, either with vote or a raised middle finger at home?

Even the ACDP grew, improving by 80% since the last LGE, yet more proof that God works in extremely mysterious ways.

Others, however, will be nursing taxpayer-funded cocktails in more pensive moods.

The EFF, for example, failed to win a single municipality (repeat after me, children: Twitter Isn’t Real Life) and even though its overall tally was up 26% compared to 2016, its final result, topping out at around 10.4% of the national vote, was slightly down on what it managed in 2019.

Truly, the EFF is a government in waiting. And waiting. And I’m going to keep using that joke until the EFF stops making that now thoroughly debunked claim.

As for the ANC (down 14% from 2016) and the DA (down 19%), well, what can one say that the electorate hasn’t said far more eloquently, either with vote or a raised middle finger at home?

The DA will now face a number of difficult questions. Where to from here? Pizza in John’s man-cave, or just milkshakes at Mugg & Bean? Is it right to keep blaming Mmusi Maimane, or is it time for fresher scapegoats, say, journalists or the IEC or Critical Race Theory or Mercury in retrograde?

The ANC, too, will be asking important questions about renewal, like “What does it mean?” and “How much can we sell it for?” and “Is it flammable, and if so, can we chuck it into the furnace at Medupi?”

So many questions, and, despite Monday, so few answers.

Schools defy department with exams, not tests, for grades 10 and 11

ANALYSIS | Who will lead metros? Get out the calculators, it could get ...