EDITORIAL | Billions in green funding are a godsend. Let’s not ...

EDITORIAL | Billions in green funding are a godsend. Let’s not mess it up 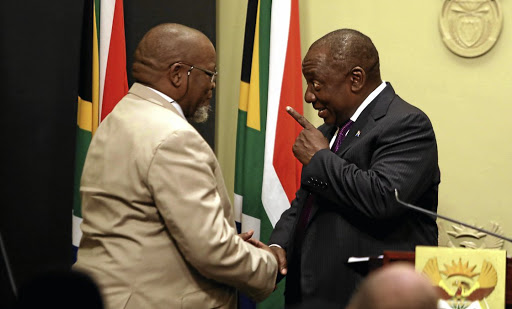 LISTEN TO ME Mineral resources and energy minister Gwede Mantashe and President Cyril Ramaphosa haven't always been aligned when it comes to committing to the transition to renewable energy.
Image: ESA ALEXANDER

President Cyril Ramaphosa’s announcement on Tuesday that SA has secured $8.5bn (R131bn) in funding over the next five years to help move from coal to renewable energy coincided rather unfortunately with a new round of load-shedding.

Thankfully, this time it was only for one night, but for those whose livelihoods have been severely impacted by power cuts, a five-year plan seems a lifetime away.

But the gloom should not overshadow the scoop. There is a silver lining on that cloud of smog.

Through the Just Energy Transition Partnership, SA has secured highly concessional climate financing from the US, the UK, Germany, France and the EU to help move away from coal to cleaner forms of energy, thereby reducing harmful greenhouse emissions. It’s a landmark deal, the first significant financing partnership to come out of the COP26 climate conference in Glasgow, Scotland.

More than 80% of SA’s power comes from coal, and the country is the world’s 15th largest carbon dioxide emitter.

At Eskom’s Lethabo power station in the Free State, 50,000 tons of coal are burned each day. That’s just one plant, on one day. Global statistics show that burning 1kg of coal will produce 2.42kg of carbon dioxide. Now imagine all the CO² Eskom’s 13 coal-fired power stations pump into the atmosphere on a daily basis. It’s a scary thought.

In a statement on Thursday, the US said the partnership is expected to prevent 1 to 1.5 gigatons of emissions over the next 20 years and support SA to move away from coal and “accelerate its transition to a low emission, climate resilient economy”.

While Ramaphosa has been a keen proponent of renewables, mineral resources and energy minister Gwede Mantasha has been less of a fan, often extolling the benefits of ‘clean coal’ technologies.

Included in the plan is ensuring job security for vulnerable communities that rely on coal-powered plants for their livelihood. To this end, the deal will work to identify financing options for innovative technical developments and investments, including electric vehicles and green hydrogen, to help create quality, green jobs. That is vitally important, as the plan will need buy-in from the powerful mining unions.

Details on exactly how the deal will work will be released “over the coming months”.

Until then, questions remain about exactly how our new green energy industry will be built and how coal will be phased out.

Transparency will be key. How will the money be spent? How will jobs be protected? Who will benefit from the new projects and what checks will be put in place to ensure there is no corruption? Are the donor countries genuinely committed to seeing the deal through, or is it just grandstanding aimed at impressing COP26 delegates?

And will SA politicians finally get on the same page? While Ramaphosa has been a keen proponent of renewables, mineral resources and energy minister Gwede Mantashe has been less of a fan, often extolling the benefits of “clean coal” technologies.

Last month he told the Joburg mining conference there should be no rush to abandon coal in favour of renewables.

Perhaps the biggest example of their opposing views came in June, when Ramaphosa publicly overruled Mantashe by announcing that private companies could generate up to 100MW of power without a licence — 10 times more than the 10MW Mantashe had put the cap at. It was no coincidence that Ramaphosa made the announcement just before he jetted out to Cornwall for the G7 summit, where climate change was a major focus.

There will be no smooth sailing until government is singing from the same hymn sheet.

There will be no smooth sailing until government is singing from the same hymn sheet.

COP26 has set a goal of raising $100bn a year for the next five years to help developing countries with climate change mitigation and adaptation.

SA has scored a major win in securing the first commitment. European Commission president Ursula von der Leyen has described it as a “global first” and one that “could become a template on how to support just transition about the world”.

SA’s energy sector, with its over-reliance on coal-powered plants, is long overdue for an overhaul. Mired in massive corruption scandals and ineptitude, it has become an albatross about government’s neck, chasing away investment and knocking the ruling party’s popularity at the polls.

Countries that are still coal-reliant are out of step with the rest of the world.

Even China — the world’s biggest emissions culprit — is no longer financing overseas coal projects and is adding renewables to its power fleet at lightning speed.

A fresh start is exactly what SA needs.

The world will be watching to see if the deal will be a success or a failure. For the sake of SA’s battered economy, let’s not mess it up.