In her defence, the minister didn’t expect to be accosted by her ...

In her defence, the minister didn’t expect to be accosted by her own 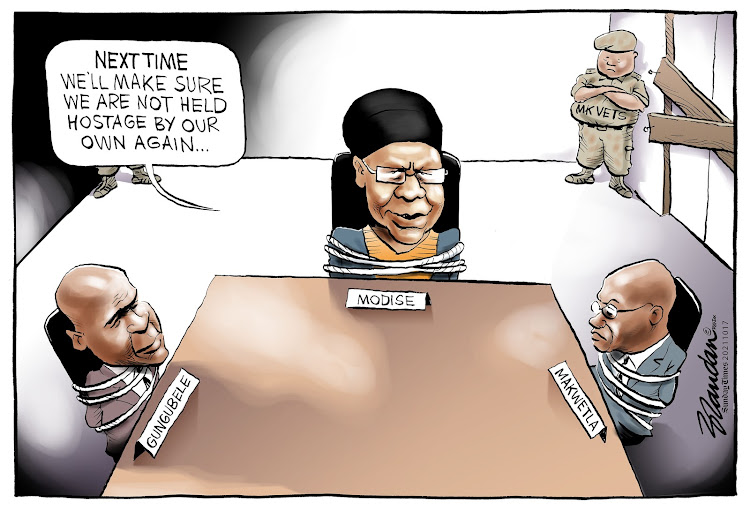 It might seem like a stretch to see a connection between July’s bloody violence, described by the president as an insurrection, and last week’s half-hearted kidnapping of Thandi Modise, her deputy, and minister in the presidency Mondli Gungubele.

The former saw over 300 South Africans murdered and billions of rands burnt. Questions were asked about the loyalty of the police in KZN, and answered about the extent to which Cyril Ramaphosa’s opponents in the ANC are willing to engage in scorched earth tactics.

Last week’s kerfuffle, on the other hand, was infinitely less fraught, no matter how hard some reports tried to turn it into a Hollywood blockbuster featuring a minister of defence taken hostage by “war veterans”.

I suppose the cliché was inevitable. For a country that pretends to be cynical, our relationship with received soundbites and thought-ending memes is that of a baby offered a bottle. It’s why we’ve spent the last 14 years calling blackouts “load-shedding”, as if deindustrialisation and asset-stripping were part of some carefully structured recovery plan.

Thandi Modise, a failed pig farmer, is defence minister in the way that a kitchen towel stuffed into a hole in the floor is a floorboard. That’s not her fault: ANC ministers are appointed according to their loyalty and longevity, not their ability.

It’s not surprising, therefore, that even respectable newspapers would describe the cosplaying fantasists who locked Thandi Modise in the St George’s Hotel in Irene as “war veterans”.

It’s possible, of course, that one or two of them were, in fact, veterans of some legitimate uMkhonto we Sizwe operation staged before 1994. But given what the “veterans” have become in recent years — the desultory opening act of the Radical Economic Transformation cabaret, starring a number ofmillennials who must have been seen action somewhere between conception and birth — it is very hard to believe that the majority of those in Irene were anything but bussed-in rent-a-bullies or people who owed Carl Niehaus money.

Then again, they weren’t the only unremarkable people hiding behind big titles on Thursday.

Thandi Modise, a failed pig farmer, is defence minister in the way that a kitchen towel stuffed into a hole in the floor is a floorboard.

That’s not her fault: ANC ministers are appointed according to their loyalty and longevity, not their ability.

Besides, in modern SA, the job of defence minister isn’t very hard, consisting of one monthly meeting with accountants and HR, in which everyone brainstorms whether it’s possible to have a defence force, while also paying that defence force with buttons and President Motlanthe T-shirts left over from 2009. (“Given the current cost of bullets, have we considered the possibility of simply starving an enemy to death?” “Perhaps if they had occupied your farm, minister, otherwise …” “Hey, we’ve talked about this.”)

Media hyperbole and government euphemism, however, had nothing on what Modise produced at the weekend.

Sounding as unflappable as only those in sheltered employment can, she explained that her waylaying was proof that SA is “not a security-heavy state” and that “ministers still trust fellow citizens to sit around with them” (“sit around”, of course, being the official job description of South African cabinet ministers).

In other words, being held against your will is proof of how progressive you are.

OK, yes, 56 “veterans” have been arrested, but does that imply that something bad happened? I mean, doesn’t everyone need a good arresting from time to time, just to pep them up and keep them focussed?

To listen to the minister, it was all big misunderstanding that turned into a heart-warming exercise in democracy. Viva involuntary incarceration! A better kidnapper for all!

All of which is why the Great Irene Lock-In seems very silly indeed when compared to the July insurrection.

But I think there is a connection between them, revealed by the state’s response on both occasions.

In July, the president told us, dangerous people tried to overturn the rule of law, possibly with the intention of seizing power in at least one province. Those people, we were assured, were known and would soon be arrested.

Now, two ministers and a deputy have been hijacked by an officially disbanded militia that has been co-opted by the faction widely suspected of trying to set the country alight in July, and all we hear is that all’s well that ends well.

There has been no presidential address, no united front from cabinet affirming the rule of law and the stability of the state, just as there is still no commission of inquiry into the events of July.

From the outside, this shrugging response looks like weakness or dysfunction. But I suspect it’s something that’s been infinitely more destructive to SA: family loyalty.

To the ANC, there are only two kinds of people in the world: family and outsiders.

Of course, the ANC isn’t Amish: one may interact with these outsiders, especially their money. But they will never be family, and so they will never understand how the family does things. This ignorance will breed suspicion and perhaps even aggression. Outsiders, after all, are entirely dedicated to destroying the family, for reasons only they will understand.

Which is why the family must never, ever show even a glimpse of disunity or weakness or dysfunction.

If brother has turned on brother, or a drunk uncle has set KZN ablaze, or Aunt Thandi has got herself locked in by the cousins who work there by the fancy dress place, that’s none of their business.

Good. Now repeat after me: Daddy loves you all very much, and everything is fine …

EDITORIAL | Politics in SA is a money-making blood sport