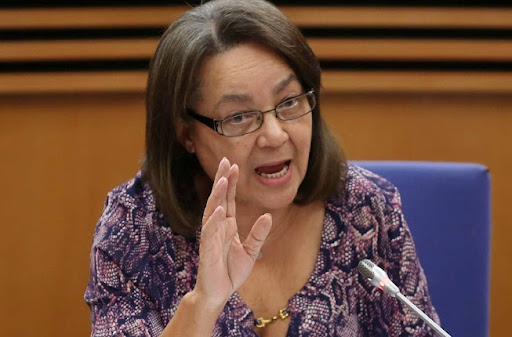 HI, PAT None of the country's top eight parties is run by a woman. It's only when you get to ninth place that you find one - Patricia de Lille of the Good party.
Image: Esa Alexander

Imagine if we woke up tomorrow to discover a 10th province had been added to SA, populated entirely by women.

Now imagine 2.7-million of those women had registered to vote in next month’s local election.

At this point, it might seem sensible to imagine such a discovery would trigger a frenzy of woman-centred electioneering by political parties in the new province.

After all, it’s not news that South Africans are abandoning electoral politics in droves. In 1994, almost 86% of eligible voters made their mark. In 2019, that figure had plunged to 49%.

Things are looking even worse in 2021. According to the Independent Electoral Commission’s statistics, the voters roll has shrunk in all but two provinces. Given the country’s population keeps growing, a slowing of growth would be a concern. A flat line would suggest a problem. But a decline suggests a crisis for democracy in SA.

In such a climate, you’d imagine parties would fall over themselves to establish what those 2.7-million women want. I’m not a campaign manager, but I would guess that at the very least, parties would appoint women into leadership, or at least into senior positions, and shift their focus from Big Man posturing to trying to listen to the hopes and fears of women.

I know enough self-employed creative people to know the golden rule of singing for your supper: it’s all well and good to try to attract new fans, but your first job, every day, is to keep the ones you have.

And yet I’d be wrong. Because those millions of women are already here, ready to vote, and yet with the election just more than two weeks away, it’s all been business as usual for the Boys’ Club.

To understand just how little South African politicians seem to care about women, one needs only look at the IEC’s numbers. Of the 26-million South Africans registered to vote on November 1, 55% are women, outnumbering men by 2.7-million. In Limpopo, the gap is even more extreme, with women representing 59% of eligible voters.

And yet not one of the country’s top eight parties — the ANC, DA, EFF, IFP, FF Plus, ACDP, UDM or ATM — is led by a woman. You have to scroll all the way down to ninth, where Good is led in absentia by public works minister Patricia De Lille.

Certainly, none of them, not even Good, have put women at the front and centre of their policies and messaging: according to this week’s update by Media Monitoring Africa, of the people categorised as “sources” of election news, 78% are men.

Of course, it’s possible parties don’t think they have to pay more attention to women voters since they’re already showing up in much larger numbers than men.

In a deeply patriarchal society like ours, there might also be a fear of alienating even more men if politics focuses more actively on women.

Still, I know enough self-employed creative people to know the golden rule of singing for your supper: it’s all well and good to try to attract new fans, but your first job, every day, is to keep the ones you have.

Because if SA’s women become as disenchanted as its men, we might one day remember a 49% turnout as the good old days.