It’s a pity the DA posters have overshadowed the real election ... 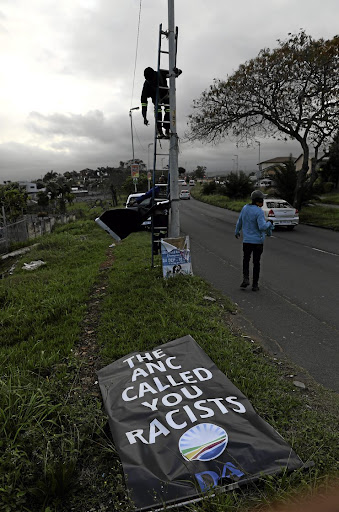 DIVISIVE The DA posters are taken down in Phoenix, Durban, after a public outcry, which has seemingly deflected from the real issues at stake in the upcoming elections.
Image: Sandile Ndlovu

“You cannot fatten a pig on market day.”

This adage from British politics resonates here and now in the dismal run-up to polling day on November 1.

The implication is that unless you have a track record of delivery, or even basic decency established well ahead of voting day, you are unlikely to reap the rewards, or gain a seat, when the votes are counted.

Before time began, in February 1986, I won election as a young candidate to the city council in Johannesburg by a whisker, a landslide majority of 39 votes. My National Party opponent was far better known than me and my party leader (Van Zyl Slabbert) did the unhelpful thing of resigning from the party and parliament, in a blaze of self-immolation, a mere 10 days before polling day.

The only essential reason I just held on to win was that on election day when the voters arrived at the polling station, I knew more of them by name than my opponent, who assumed his high name recognition rather than face time with his electors would ensure his victory. It did not quite work out that way on election day in Bellevue/Judith’s Paarl.

Quite why so many candidates and parties jostle to place their names on the ballot paper and then make so little effort to enlist support for their cause, remains one of the more enduring mysteries of this campaign.

Today I live and vote in a DA stronghold in Cape Town, where the massive vote for the party last time round (94%) ensures one-party dominance, unlikely to be disturbed much on November 1.

Yet, doubtless on voting day about 20 wannabe council candidates will festoon the ballot paper in Ward 62, Cape Town. But with 18 days until election day, 19 of them have had zero contact with the voters they presume to elect them. Not a single pamphlet, poster, telephone call, sms or information table at the local shopping centre.

The DA candidate did receive an introductory shout out from the retiring councillor for the area but offered little by way of a specific prospectus for his likely five-year stint on behalf of the residents he expects to support him.

Quite why so many candidates and parties jostle to place their names on the ballot paper and then make so little effort to enlist support for their cause, remains one of the more enduring mysteries of this campaign, which defies the wise aphorism of veteran US politician Tip O’Neill that “all politics is local”.

The poster of course which resonates nationally right now had a decidedly local provenance in Phoenix, KwaZulu-Natal.

So many electronic pixels and acres of newsprint have been devoted to the “heroes/racist” diptych that it beggars belief that one week later they still remain topic du jour.

Primarily that is because, on the one hand, there is a coterie inside the DA which prefers to bomb its own ship, with on and off the record media briefings, than concentrate its fire on its political opponents.

Next, there is what George W Bush once memorably described as the “soft bigotry of low expectations”. That has overtime application in local politics here.

In the same week the DA acknowledged its mistake and removed the posters to get back to its core message, Phoenix remained in the frame when other parties sought to make electoral hay there.

Thus, mining its well worn anti Indian mantra, the EFF denounced Phoenix Indians as “racist”. Barely a raised eyebrow in the media or from the commentariat. Racist remarks and stereotyping are so baked into the EFF share price it seems that they cause no outrage among the “expert” commentators.

Next up, on Monday, IFP warhorse Mangosuthu Buthelezi reaffirmed the DA trope by describing Phoenix residents as “heroes” with the necessary disclaimer that vigilante murderers were not.

But in the field of arch hypocrisy and double dealing, the man at the top of the ANC and the country, Cyril Ramaphosa, is the runaway winner of the gold medal for what George Orwell called “double speak”. Or holding two utterly contradictory ideas in your head and profoundly believing both.

Last week, Ramaphosa lambasted the DA for its “despicable” posters advising that the party resorted to “racist tactics ... instilling fear in the minds of our people”. By contrast, he offered that “since 1912 the ANC has stood for nothing else but uniting the people of SA”.

Really? Ramaphosa obviously is counting on the fact that most people have the memory of a goldfish, or he himself has offered so many verbal hostages to fortune (5% economic growth, R1-trillion of foreign investment, the end of load-shedding and so on) that he doesn’t remember them. At least in this case, though, he did not outsource his thought leadership to a committee, a commission or a panel of “experts”.

Yet it was the same Ramaphosa, campaigning for the party “which since 1912 has stood for nothing else but uniting the people of SA”, who in 2013 in Limpopo warned: “If you do not vote ANC the Boers will come back to control us.” To be fair, there was some media pushback on this blatant and divisive racist electoral call.

In response, Ramaphosa issued a “clarification”. He advised that this attack was “directed at the apartheid regime” adding that it was “unfortunate” that his statement had caused any offence.

The media and commentators universally accepted this clarification and half apology. No such leeway was granted last week to John Steenhuisen and his party. Their “apology” was interrogated and rejected by the commentators who had demanded it. And the issue burbles along, doubtless helped by people inside the DA who, instead of dousing the flames, reignite them.

Meantime back in the real world and away from the politics of outrage, real and faux, there are genuinely burning issues which should be at the heart of this campaign, but on which barely a word, let alone a plan has been offered.

National Treasury issued a local government revenue and expenditure report for the period July 1 2020 to June 30 2021. The numbers are scary. Municipalities are drowning in debt, and are in an advanced death spiral. The precise figure is an aggregate of R232.8bn owed to municipalities by consumers, 72% of which is owed by defaulting households. According to economist Mike Schussler, the consumers’ debtors book for local government that has not been paid for 90 days or more stands at R97bn and some R177bn total debt has simply been written off over the past 10 years.

In the improbable event of any local candidate here knocking on my door, I would ask them how they plan to fix this disaster zone. And so should you. Its of higher relevance than offending posters in Phoenix.