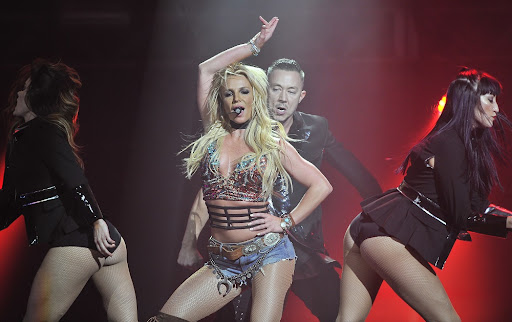 She was raised in Kentwood in Louisiana, smack bang in the middle of redneck America.

Mom and dad eloped just two weeks after he divorced his first wife. Lynette was 21. Jamie was a belligerent drunk more accomplished at downing frosties than holding down a proper job.

When he was 13, Jamie’s family had been devastated by tragedy. His mother had taken her own life on the grave of one of her sons. His baby brother had died when he was just three days old. Maybe this was why he was so screwed up. Maybe not.

Lynne was the daughter of a strict Baptist dairyman and a British war bride. The marriage went pear-shaped from the start.

Lynne tried to divorce Jamie before the birth of their second child. She accused Jamie of having sex with some tart on Christmas Day. He would get so blind drunk that she once blasted his cooler with a shotgun.

Then their second daughter, Britney Jean Spears, came along, a blessing and a miracle.

Even at the age of three she was a born performer who could steal any scene. God had gifted them with a lottery ticket out of a life teetering precariously on the edges of white trashville.

Britney started choir, dance and gymnastic lessons when she was three. By six she’d won the Miss Talent Central States competition. Jamie and Lynne sometimes borrowed money from friends to pay for petrol to get her to auditions.

He would get so blind drunk that she once blasted his cooler with a shotgun.Then their second daughter, Britney Jean Spears, came along, a blessing and a miracle. 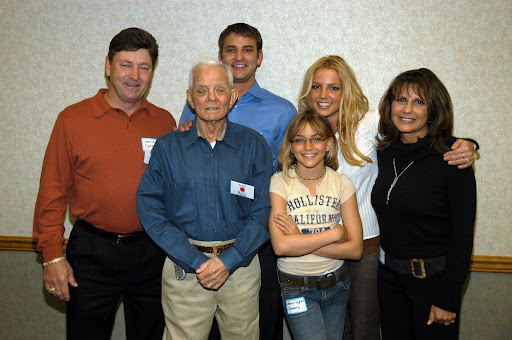 The family went bankrupt, but still Jamie and Lynne put everything they could into Britney’s career and then, jackpot.

At 12 she landed a role on The Mickey Mouse Club, alongside Christina Aguilera and Justin Timberlake, a show that had catapulted several talented kids to stardom.

But that all changed when Britney turned 16. Suddenly pigtails and chastity vows were less profitable than teenage vixens.

In 1999 Britney exploded on the scene in a music video of her hit Baby One More Time as a post-pubescent Lolita, a gyrating Catholic schoolgirl. By 2003 she had made $73m in record sales.

At first she remained normal and grounded, an ordinary goofball teen. On tour she would wash dishes, do her own laundry and call older female assistants “ma’am”.

“We would wake up Britney at 6am, and she’d work on a video for three or four days straight for 20 hours a day,” Abe Sarkisyan, her driver for five years, told Rolling Stone magazine in 2008. “She was a kind, generous sweetheart with a big heart and no poor habits.”

There is the awful realisation that everything can mean nothing and nothing can mean everything. The gilded cage is a prison. Love is only a chimera. Trust is a disintegrating mirage.

Reality could be a scene from The Tempest: “Hell is empty and all the devils are here.”

At the lowest point she is strapped to a gurney like a deranged serial killer and hauled off to a psychiatric ward, her descent to hell chronicled by news choppers’ spotlights and the orgiastic paparazzi.

When Britney spirals out in 2008 it is judged the most public downfall of any star in history. Barbie rolls in the pigsty while millions delight in schadenfreude.

At the lowest point she is strapped to a gurney like a deranged serial killer and hauled off to a psychiatric ward, her descent to hell chronicled by news choppers’ spotlights and the orgiastic paparazzi.

Journalist Vanessa Grigoriadis writes: ‘She doesn’t want anything to do with the person the world thought she was. She is not a good girl. She is not America’s sweetheart. She is an inbred swamp thing who chain-smokes, doesn’t do her nails, tells reporters to ‘eat it, snort it, lick it, fuck it’ and screams at people who want pictures for their little sisters.”

Britney isn’t a celebrity, she is THE celebrity.

In 2008 paparazzi agencies estimate she has made up to 20% of their coverage for that year.

Every day in LA, at least a hundred paparazzi chase her in a game of cat and mouse as she races around town on mundane errands that any skivvy could perform. Putting in petrol, the pet shop, Starbucks, the local 7/11 ...

Her behaviour becomes more bizarre, her substance abuse more severe. She shaves her hair, lets her dog defecate on a $6,700 gown during a photoshoot, vomits in public, exchanges clothes with a strip-club cocktail waitress, goes shopping in the middle of the night in fishnet tights, her white panties visibly stained with menstrual blood.

By 2008 Britney is divorced from backing dancer Kevin Federline after a short marriage during which she pops out two boys in quick succession, Sean Preston and Jayden.

Like Jamie, he’s another bum orbiting the Britney sphere, with several other children with other women and a penchant for spending the wife’s money. He buys himself a $250,000 silver Ferrari with monogrammed rims and tries to piggyback on her fame by cutting his rap album. “Kevin didn’t step up to the plate and be a man to Britney in their relationship,” a close friend tells Rolling Stone. “He was a boy to her, turning his back on her for his bros and that fame.”

Three weeks after Jayden’s birth, Federline takes a private jet to Vegas to party with his mates. Spears files for divorce soon afterwards by sending Federline a text message. 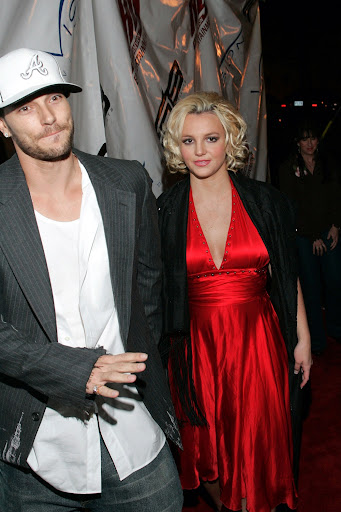 Three weeks after Jayden’s birth, Federline takes a private jet to Vegas to party with his mates. Spears files for divorce soon afterwards by sending Federline a text message. At a nightclub, he scrawls on a bathroom wall: “Today I’m a free man—f**k a wife, give me my kids bitch!”

At one stage, as Britney goes into meltdown, she has her sons removed completely from her care, with zero visitation rights.

The gurney episode occurs early in January 2008. A bodyguard arrives to take the boys back to their father.

She goes into a bathroom with Jayden and refuses to come out. Soon the police, fire department and an ambulance are on the scene. News anchors report live on the standoff. Four helicopters circle overhead and the house is overrun with cops and firemen wielding axes. Serial killer, not superstar.

The police remove the child. Britney is strapped on a gurney under the “5150” code, which allows forced hospitalisation in a psychiatric ward.

What follows will go down as one of the most exploitative and cynical abuses of stardom in history.

With Britney in a psychiatric ward, her family strikes. Britney is forced into a conservatorship that will eventually last for 13 years.

For all intents and purposes Britney ceases to exist. In her place is her father. “I am Britney Spears!” he tells her repeatedly. Whenever she resists his orders she is barred from seeing her children

Jamie is a nasty piece of work.  When Lynne and Jamie divorced in May 2002 Britney tells People that it was “the best thing that’s ever happened to my family”,.

Conservatorships are normally arrangements to take care of the interests of elderly people with dementia. Now Britney can’t have a credit card or write a cheque. The father who has previously gone bankrupt is the de facto boss of her millions.

Britney is strapped on a gurney under the ‘5150’ code, which allows forced hospitalisation in a psychiatric ward. What follows will go down as one of the most exploitative and cynical abuses of stardom in history. 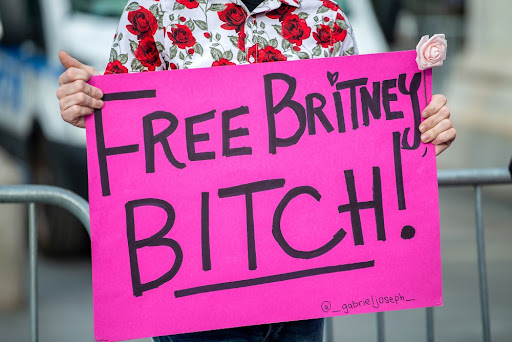 Britney Spears supporters gathered to protest at the #FreeBritney Rally on September 29 2021 in New York City. The Free Britney Rally coincided with Spears’ conservatorship hearing which was held in Los Angeles at the same time in which Spears's father, Jamie Spears, was removed by a judge as conservator of her estate.
Image: Alexi Rosenfeld/Getty Images

Her calls are monitored and censored. She is told what to wear, what to eat, who she can talk to and who she can see and date. If she wants to get a hamburger with a friend she has to ask permission. She cannot freely communicate with her millions of fans.

You’re fat. Daddy’s gonna get you on a diet and a trainer, and you’re gonna get back in shape, Jamie tells her. She is a whore and a terrible mother.

She gets put to work like a beast of burden with no respite. When she wants to take a break after a tour she gets told that would be “detrimental” to her status as a global icon.

She releases four albums, headlines a global tour grossing $131,000,000 and performs for four years in a hit Las Vegas residency. So much for dribbling into a bib.

In June this year Britney is finally able to appear in court and tell a judge of her 13 years of hell, and the reality is more invasive and tyrannical than anybody could foresee.

After one tour, she was told to start rehearsing for the next, even though she wanted a break.

One day she refused to do a certain dance move in rehearsal, and “it was as if I planted a huge bomb somewhere”.

Her therapist told her that he’d been informed that she wasn’t cooperating or taking her medication and put her on lithium; the new medication made her feel drunk and scared.

Over the holidays, a woman came to perform a “psych test” and her father told her that she had failed it and needed to go to rehab. “I cried on the phone for an hour, and he loved every minute of it,” she said. “The control he had over someone as powerful as me — he loved the control to hurt his own daughter. One-hundred thousand per cent, he loved it.”

She had to attend 10 hours of meetings a day, seven days a week, for four months, and if she didn’t cooperate she wasn’t allowed to see her kids or her boyfriend.

Perhaps the most grotesque aspect of the conservatorship was absolute control over her reproductive rights. The Handmaid’s Tale comes to Hollywood.

“I was told right now, in the conservatorship, I’m not able to get married or have a baby. I have an IUD inside of myself right now, so I don’t get pregnant. I wanted to take the IUD out, so I could start trying to have another baby, but the so-called team won’t let me go to the doctor to take it out, because they don’t want me to have any more children.”

Finally Britney has been heard, and as she turns 40 the conservatorship is over.

If she had known the ordeal that lay before her, Britney might have opted for a life back in hillbilly country from whence she came.

The ANC is rewriting history and once again history repeats itself