How ‘the greatest shoal on Earth’ leads sardines into an ... 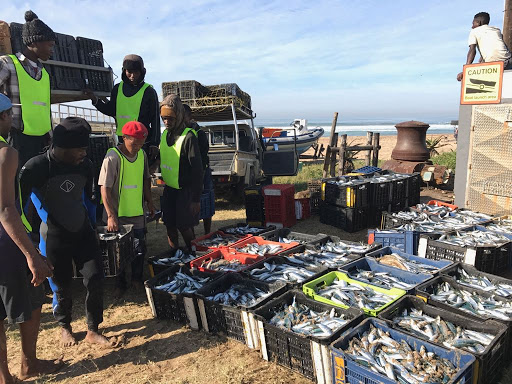 CATCH OF THE DAY Fishermen at Pennington on the KwaZulu-Natal admire their bounty.
Image: Jackie Clausen

One of the world’s most spectacular marine migrations is the KwaZulu-Natal sardine run. The so-called “greatest shoal on Earth” takes place during the southern hemisphere’s winter. It involves the movement of tens to hundreds of millions of the silver fish from the warm-temperate waters of SA’s south coast to the subtropical waters of the east coast, more than 1,000km away.

This annual mass migration, first reported in 1853, is triggered by cold water upwelling on SA’s south-east coast. In this process, cold, nutrient-rich water rises up from the deep, creating a highly productive food web. The migration attracts vast numbers of predators: the sardine schools are followed northwards by seabirds, sharks, seals, dolphins and even large baleen whales. These devour as many of the helpless sardines as they can, which is made easier because their prey is sandwiched between dry land and the hot, tropical waters of the southward-flowing Agulhas Current, which exceed the sardines’ physiological tolerances.

To make matters worse, those fish that survive the predation still don’t have it easy: the journey is so strenuous that the sardines which eventually arrive on the east coast are emaciated. This goes against what scientists understand about animal migrations – such large-scale population movements normally provide some “selective advantage” by allowing animals to make optimal use of environmental resources.

Surely the obvious negatives of participating in the sardine run must be hugely outweighed by some fitness benefits to make it all worthwhile? The answer, our new research suggests, is “no” — and the reasons for the sardines’ behaviour lies in their genes.

One popular explanation for why the sardine run occurs is that the migration might be a relic of spawning behaviour dating back to the last glacial period, about 10,000 years ago. What is now subtropical Indian Ocean habitat may have been an important nursery area with cooler waters.

When the ice age ended, the sardines would have physiologically adapted to tolerate the subtropical conditions in this region and evolved into a distinct east coast population that continues to spawn there to this day. These sardines mix with south coast sardines during summer, then separate from them in winter as they migrate up the east coast. The presence of sardine eggs in the plankton confirms spawning does occur in this region.

Surprisingly, we discovered that sardines participating in the migration are not part of a distinct east coast population. Instead, they primarily originate from the colder waters off SA’s Atlantic west coast. Why would these sardines migrate to the opposite end of the country, only to end up in habitat that is obviously too warm for them? We suggest the fish are drawn into what amounts to an ecological trap — a rare example of a mass migration that has no obvious fitness benefits.

Our research started from the assumption that the sardine run represents the spawning migration of a distinct stock of sardines that is physiologically well adapted to tolerate subtropical conditions. 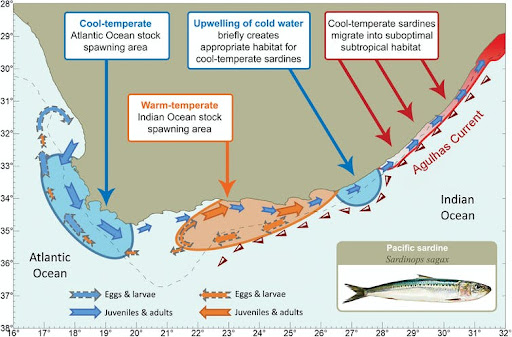 WHAT'S AT PLAY This illustration examines some of the factors at play in the sardine migration.
Image: Supplied by the authors

Physical characteristics and other data indicate sardines on the east coast are indeed distinct. But this may result from different environmental pressures, including the stress of participating in the migration. We knew that understanding the sardines’ heritable genetic traits would provide stronger evidence for this hypothesis — or debunk it.

So we used thousands of genetic markers from across the genomes of hundreds of sardines captured throughout the species’ South African range. Though most of these markers showed little differentiation, a suite of genetic markers with a signal of adaptation to water temperature showed regional differences.

We found evidence for two regional populations, but it was not the east coast sardines that were distinct. Instead, we found genetic differences within the species’ temperate core range: one population was associated with SA’s cool-temperate west coast (Atlantic Ocean) and the other with the warm-temperate south coast (Indian Ocean).

The strong affiliation with water temperature suggests thermal adaptation maintains these regional patterns; each population cluster is adapted to the temperature range that it experiences in its native region.

The sardines participating in the run showed a clear affiliation with the west coast population. Not only are these sardines not well adapted to subtropical conditions, but they prefer the colder, upwelled waters of the south-eastern Atlantic Ocean.

This study solves some of the major riddles concerning the sardine run, which make perfect sense in the light of the new evidence.

Our findings explain why only a small fraction of the sardines present on the south coast participates in the run. The bulk of those sardines are native to this region and are adapted to warm-temperate conditions. Because of this, they show little interest in the cold, upwelled water.

The results also provide an explanation why no sardine runs occur in years when there is no cold water upwelling. The upwelling on the southeast coast attracts west coast sardines that have dispersed to the south coast, but that are not well adapted to the warmer water temperatures in this region. They essentially consider the upwelling regions in the southeast to be west coast habitat. For a short time, it is as if they are back home in the Atlantic, but when the upwelling ends and water temperatures rise, their fateful error is revealed.

At this point, the predators have gotten wind of their presence and as the sardines try to escape, they travel ever farther north into unbearably warm subtropical habitat. The fate of the fish that survive the sardine run is uncertain.

Our genomic explanation shows that much still remains to be discovered about how marine life interacts with its environment. A great deal of integrative, multidisciplinary research is still needed before humans can efficiently and sustainably benefit from the incredible diversity of life and the resources available in the sea.