SA on a hiding to nothing if economic sabotage not tackled

SA on a hiding to nothing if economic sabotage not tackled

If criminals in political clothing are not stopped, poverty will worsen and investors will leave 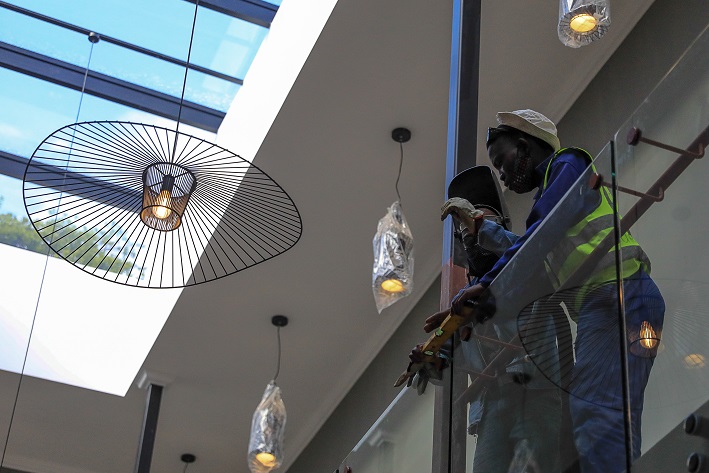 WIRED INCORRECTLY Workers take a break at a construction site. Those who target these areas are waging a low-intensity economic sabotage campaign. All they are interested in is unduly benefiting themselves, to the detriment of businesses and the communities they purport to support - communities that stand to benefit from that investment.
Image: Sebabatso Mosamo

In his February 2020 state of the nation address (Sona), Ramaphosa announced the formation of “specialised units” comprising of the police and National Prosecuting Authority (NPA) to confront “crimes of economic disruption” by those who “extort money from construction and other businesses”. In some instances they demand no less than 30% of the value of contracts.

Alongside corruption and malfeasance, such criminality is part of a nationwide, low-intensity economic sabotage campaign. The culprits are not in the least interested in seeing the projects through from start to finish. They mobilise the unemployed — the youth in particular — and threaten people to benefit unduly and to the detriment of businesses that have invested inordinate amounts of money and communities that stand to benefit from that investment.

Having initially targeted only government-sponsored projects, the criminals now have their sights on private sector-funded projects. Surely private, public and other development projects ought to benefit communities. Business should endeavour to see to it that they do because it’s the right thing to do and in their interests.

However, there is everything wrong, in fact criminal, with a few elites unduly enriching themselves and, in the process, abusing members of communities who are inclined to listen to confidence tricksters believing their lives will change for the better.

In the Northern Cape, for example, there have been incidents where local politicians actively mobilise for the obstruction of production or outrightly prevent projects from commencing or proceeding to extract bribes from companies. Businesses that acquiesce to such criminal demands will find that the beast has an insatiable appetite.

These predatory machinations become more ferocious and obnoxious when the company representatives are women. Invariably, the beast of patriarchy cannot control the manifestation of its ugliest side.

What does all this tell us?

The triple challenge of poverty, inequality and unemployment is a mammoth one off which government and business dare not take their eyes if we are to secure a stable and peaceful future. There is no alternative or shortcut to addressing the challenge than an upward economic growth trajectory, which can only come from sustained investment in the economy, supported by an array of complimentary and enabling public policies.

Political parties have a responsibility to capacitate their local leadership and, by extension, local government structures. Local political leaders should improve their understanding of the workings of the economy to act as the catalysts they are supposed to be for local economic development.

Those who destroy public infrastructure in the course of protest action are no ordinary protestors. They are criminal, economic saboteurs and must be treated as such.

Citing the recent dissolution of the Lekwa municipality in Mpumalanga because of its inability to deliver services such as water, Mboweni said: “We can’t speak of economic recovery and prosperity when municipalities, as agents responsible for helping government achieve [developmental] objectives, find themselves in a perpetual crisis.”

Much of the “perpetual crisis” emanates from the skills deficit our country faces.

Additionally, the Covid-19 pandemic will hasten the process of workplace mechanisation which will lead to further job losses at a time when SA needs more people employed. This underscores the need for across-the-board leadership which appreciates the need to prioritise socio-economic development.

South African public discourse — law-enforcement agencies included — does not pay sufficient attention to economic sabotage as a priority crime which dispossesses South Africans. Those who destroy public infrastructure in the course of protest action are no ordinary protesters. They are criminal, economic saboteurs and must be treated as such.

It hardly requires emphasis that economic sabotage worsens poverty, inequality and unemployment, first by delaying or stopping development projects; second, by communicating a message to would-be investors that SA is not a worthy investment destination; and third, by emboldening criminals who will, sooner or later, test their success elsewhere.

It also behoves leadership at local, provincial and national levels to crack the whip. This has not always been the case and we require decisive, action-orientated leadership to send an unequivocal message that certain conduct will not be tolerated.

So, where it can be established that the reason for a protest is that the ringleaders sought to benefit materially from the obstruction of economic activity, they ought to be charged with, among other things, economic sabotage.

The change in public discourse we require should also endeavour to find the necessary balance between citizens’ rights, as enshrined in the Bill of Rights, and the responsibilities we have to ourselves as individuals, those immediately around us and the country as a whole. A one-sided narrative which places emphasis on rights to the exclusion of responsibilities will not help us to produce a nation that takes its destiny in its own hands.

None of this will succeed if we do not create an environment that is intolerant of abnormalities that are slowly becoming serious normalities as the culprits dress their criminal enterprises in supposedly legitimate political clothing. Acting individually and in concert, political parties have no less a role to play. But state institutions, whose job it is to address the challenge at hand, must rise to the occasion, as much as the media should continue to expose the highway robbers for who they are.

• Mashile-Nkosi is executive chairperson of Kalagadi Manganese, a mining company that has operations in the Northern Cape and is headquartered in Johannesburg.

‘A lonely and brutal journey’: watching my mom battle with mental health

Be a fraud, very a fraud: beware of credit impersonators out there